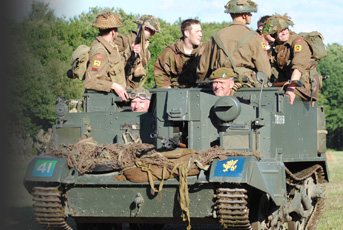 The British-designed Universal Carrier, more commonly referred to as the Bren Gun Carrier, served as a troop and cargo carrier and because of this has become one of the most immediately recognisable vehicles of the second world war. The wartime production run of this utility vehicle exceeded more than 84,000 being built in Canada, Britain, Australia, New Zealand and even America where it was produced for the US Army as the T16 with certain modifications. In fact an example of a T16 in excellent condition was put up for sale recently in Belgium priced 39,000 Euros.

Today the Bren Gun Carrier is a familiar and popular vehicle at military vehicle shows and takes part in battle re-enactment displays. The carrier served in all theatres of operations from the Far East to North-West Europe, including Italy, and even the Middle East where the dry desert conditions tested the vehicle to its limit. Carriers served throughout the entire war and continued in service until the 1950s and can be obtained either on-line through specialist sites such as www.milweb.net or at actual vehicle shows such as War & Peace where one was spotted on sale this year. A Mk II model in very good condition spotted a couple of years ago with an asking price of £26,000. From these examples it will be observed that the price for a Bren Carrier varies according to condition and model.

The Mk I carrier entered service in 1938 and featured in many of the pre-war newsreel films screened at cinemas across the country to show the British public how well equipped the country’s army was. When the British Expeditionary Force was deployed to France in 1939 on the outbreak of war the carriers went with the infantry divisions. When the Germans attacked in May 1940 the Bren Gun Carriers provided extensive service but unfortunately they had to be left behind during the retreat to Dunkirk. The German army captured a number of Carriers during the campaign and these were later pressed into service, being designated ‘Gepanzerter Maschinengewehr Trager Bren 713(e)’ and used to mount a range of weapons such as the 3.7cm anti-tank gun, machine guns and even the 8.8cm Raketenpanzerbuchse anti-tank rocket launchers.

The idea for a specialised carrier vehicle actually dated back to the early 1920s when a range of carriers was built for the purpose of transporting ammunition for the artillery batteries. From this concept it was only natural that such a vehicle also be used to transport troops across the battlefield along with the support weapons used by infantry battalions such as Bren guns, mortars and .55 inch calibre Boys anti-tank rifles. The actual term Bren Gun Carrier was applied to only one specific model in a range of carriers. The name was popular with the troops and it stuck despite whatever role the vehicle served in, even if it was towing 2-Pounder anti-tank guns.

An armoured box with tracks and a V8

In essence the carrier was little more than an open-topped steel box mounted on tracks and powered by an eight-cylinder Ford V-8 engine. The engine was situated in the centre of the vehicle with rectangular spaces either side of the cowling which allowed troops to be seated or cargo to be stored for transportation. The driver’s position was to the right and a seat to the left allowed for a Bren Gun or Boys anti-tank rifle to be fitted and operated to provide fire support. The Ford engine was water-cooled and developed 85 bhp at 2,800 rpm to give tops speeds of more than 30mph. The basic Bren Gun Carrier was 12 feet four inches in length, six feet eleven inches in width and five feet three inches in height. The Bren Carrier was capable of tackling a wide range of obstacles likely to be encountered on the battlefield including crossing gaps of more than five feet in width. Being open-topped it meant the crew and any infantry being transported were vulnerable to small arms fire. Whilst it could be seen as a design flaw it did mean that cargo and troops could be loaded and unloaded more quickly than an enclosed vehicle.

The basic Bren Gun Carrier weighed less than four tons and was protected along the sides of the hull by armour up to 12mm in thickness, but it was vulnerable to even the lightest anti-tank weapons. During the 1940 campaign in France there was a high casualty rate among carriers as they faced heavy artillery and mortar fire from the Germans.
Despite this the vehicle was versatile enough to serve as a test bed for a self-propelled gun platform, flamethrower carrier called the Wasp and many other experiments. Indeed the carrier was produced in so many types that it could fill a book in its own right.

The tracked running gear of the carrier was based on a design by Vickers and Loyd which comprised of three road wheels in a layout of a single road wheel and a further pair on a single bogie with a shaft connecting both sides together. The suspension used a Horstman-type coil spring to give a rather see-saw motion on the move, but nevertheless gave good cross-country ability. The carrier was driven by means of a steering wheel and operators could be trained quickly and easily because of the similarity to driving a wheeled vehicle. Changing direction to follow the path of a normal road was achieved by ‘bowing’ the track which could be done without the need to reduce speed. For sharper turns the driver used the vehicle’s brakes to stop one track and permit the other to move and thus turned the vehicle.

How much to insure

Bren Gun Carriers are popular and can be seen at battle re-enactment events such as Military Odyssey, the Victory Show and War & Peace (where interestingly there was one on sale) and Shaun Mitchell displayed his Carden-Loyd Carrier (a precursor of the Bren Gun Carrier) which he is in the process of restoring. This leads us on to how much is it going to cost to insure your Bren Carrier after you have bought it. We contacted the insurance broker Adrian Flux (www.adrianflux.co.uk) which specialises in arranging cover for military vehicles of this type.

After answering the usual range of questions asked of drivers, such as age, occupation and residence, we were given a quote of £110 for single driver. However, this was based on the fact that because the vehicle being tracked would have a very low mileage and probably be taken to displays on low-loaders. The vehicle is considered a classic vehicle and it was referred due to its low mileage of around 1,500 miles per year, but even then it would probably never cover that distance. The insurance does not cover public liability during displays at shows and this is something which would have to be arranged separately.