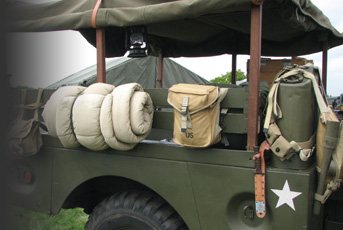 Long before America entered the Second World War as a belligerent nation following the Japanese attack on Pearl Harbor, the outpouring of vehicles from the automobile manufacturers to provide transport for the US army was showing all the signs of what could be achieved if necessary. After 7 December 1941 that necessity became urgency as America mobilised on a scale never before seen and vehicle production in all categories increased dramatically. Vehicles of all kinds, including tanks and half-tracks, were built in tens of thousands and easily outstripped the production efforts of all the Axis powers. For example, in 1943 alone America supplied to Russia some 210,000 vehicles, over 3,700 tanks and more than 2 million tyres. By the end of the war the American automotive industry had produced in excess of 3.2 million transport vehicles, almost 88,500 tanks and over 41,000 other tracked vehicles.

With or Without a Winch

One of the most widely used vehicles were those termed as Weapons Carriers, of which some 182,655 were built between 1942 and 1945. Referred to as WC with the letter ‘W’ referring to the year 1941 when it was designed and the letter ‘C’ expressing the vehicle’s half-ton rating, the weapons carrier series were developed into other roles such as the WC54 ambulance, of which 26,000 alone were built in two years. Although the letter ‘C’ coding was applied to the 4X4 wheel vehicles it was also used on some of the larger vehicles such as the 6X6 1.5 ton Dodge trucks.

Dodge already had a pre-war reputation for producing reliable work trucks and this experience was invaluable in building trucks for the military. One of the first military trucks the company built was the G-502, a 4X4 with a load rating of .75 tons which appeared in 1941. This was followed by others including then WC51 and WC52, both 4X4 in the .75 tons load rating classification and only differed in design by the latter version being fitted with an integral winch over the front bumper. Apart from this feature they were identical when one takes into account the additional weight of the winch on the WC52 version.

The WC51 was the most numerous produced with 123,541 being built and today many can be seen on show in museums or in private ownership where they take part in historical vehicle gatherings around the country.

The version seen in these pictures is the WC51 and was 4.24m in length and 2.10m in width. Height was 1.71m with the canvas cover removed but this increased to 2.17m in height when it was erected. The vehicle weighed 2.56 tonnes and could carry a cargo payload up to 800kg. When transporting troops it could carry six to eight men, including driver and co-driver, with weapons and personal kit. The WC52, of which 59,114 were built, was slightly heavier at 2.7 tonnes and 4.48m in length due to the front-mounted winch.

Both vehicles were powered by a six-cylinder Dodge petrol T214 engine rated at 76hp at 3200rpm giving a road speed of around 70km/h and an operational range of some 220km. Transmission was four forward gears and one reverse and being American designed was left-hand drive. When the larger 6X6 trucks entered service the WC51 continued to be used mainly to carry supplies leaving the larger vehicles to carry troops and heavier cargo loads as part of the ‘Red Ball Express’ convoy system to supply troops in Europe after the Normandy Landings. The WC51 and the WC52 were versatile and could be armed with machine guns and other devices. They were used by other armies during and immediately after the war. For example, Russia alone received 25,000 Weapons carriers and among the duties assigned to them was towing the Soviet ZIS-3 76mm calibre anti-tank gun.

Today the WC51 and WC52 is a favourite with vehicle owners who can ‘personalise’ their vehicles with additional items such as haversacks draped on the sides, personal weapons and stores, machine guns on pintel mounts or just wooden ammunition crates. The WC51 or WC52 can be driven on the roads and are comparable in size to some larger types of multiple people-moving vehicles (MPVs), but obviously more fun. Prices vary according to condition and the amount of maintenance work required. A recent search through some ‘On-line’ auction sites reveals that an average starting bid of around $2,500US would appear to be about right, but the final sales figure will be much higher. One site stated for a Weapons Carrier that a starting bid of $3,500US was expected with a confirmation deposit of $200US within 48 hours of close of auction. Full payment was expected within seven days of the close of auction. Buying and selling vehicles is a serious business as we will investigate in future.

The WC51 and WC52 can be driven on a standard driving licence and the vehicles turn up at various events including the War & Peace Show and Military Odyssey, where owners sometimes use the vehicles to transport their families to the event. With good maintenance these vehicles are still going strong and capable of giving good service more than 65 years after the end of the war.

Vehicles registered before 1977 are exempt from road fund tax but they still have to display the ‘tax disc’. The owner does not have to pay anything but when going to the Post Office to get the tax disc the vehicle registration document will have the information that the vehicle is exempt and the disc will be marked as such, but the tax disc must still be displayed.

We contacted the company of Graham Sykes which is an insurance broker specialising in providing quotes for military vehicles such as the Weapons Carrier. The young chap we spoke to was most helpful and answered many questions. It was explained to us that they have around 60 insurance companies they deal with, some of which are specialists in providing cover for historic vehicles. The way in which one goes about it is very easy. An owner telephones for a quotation and answers a series of questions, such as age, occupation and type of vehicle and they will then be able to give you a quote in exactly the same way as insuring the family car. Graham Sykes can be contacted on 01395 255100 or by visiting the Website at: www.graham-sykes.co.uk

Last but not least, there was a Weapons Carrier offered recently for £12,000 on E-bay!