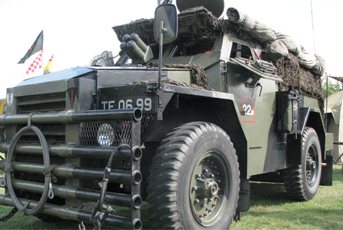 The first batch of the Humber ‘Pig’ FV1609 APCs, the Mark I, entered service with the British army in 1955.

The designation was later changed to the FV1611 which indicated it was an improved version with better armour protection. The vehicle proved itself to be a useful APC and also as a cargo transportation vehicle which is what it had been originally intended for. Over the years it proved versatile enough to be converted into a range of other roles. The hull was an all welded construction and this would remain the method of manufacture throughout its entire production run. The armour protection was 10mm thick but this would be improved to meet demands placed on it during emergencies and this in turn led to an increase in the vehicle’s weight.

Other versions of the vehicle appeared and these were given the designation FV1612, a radio vehicle, and the FV1613 which served in the role of ambulance. However, it was the FV1611 APC version which was the most numerous model produced. Operated by a two-man crew, the driver sitting to the right, and the vehicle commander seated to the left. Both positions had circular hatches over to allow light machine guns to be mounted but these were not fitted as standard, only when it was decided there was a need for the vehicle to be so armed. The rear interior of the vehicle was fitted out according to its particular role, which in the case of the APC included seating for eight infantrymen, the basic strength of an infantry section.

Dimensions and Fittings
The FV 1611 was 16 feet 2 inches in length, 6 feet 8.5 inches wide and 7 feet in height. In appearance it quite literally resembled an elongated armoured box on wheels, being slab-sided and fitted with a flat roof. Doors were fitted in the sides to the driver’s and commander’s positions and the rear was fitted with double doors. The weight of the vehicle empty was around 4.6 tons and, when fully loaded, including some 30 gallons of petrol for a 260 mile operational radius, the vehicle weighed over 5.6 tons combat ready as an APC. It was powered by a Rolls-Royce B60 Mk5A six-cylinder petrol engine developing 120HP at 3,750 RPM to give road speeds up to 40 mph. The gear box had five forward and one reverse gear. All four wheels had torsion-bar type hydraulic shock absorbers fitted and hydraulic brakes.

The Troubles
When the troubles flared in Northern Ireland in 1969 with riots and terrorist attacks, the British army was deployed to the Province in order to assist the Police maintain peace. They needed a suitable vehicle for the duties and the Pig was seen as being well suited to the urban conditions and tactics being employed. Exactly how the vehicle came to be given the name of ‘Pig’ is something of a mystery, but there are several theories. One possible theory is that drivers may have cursed it using that name because of its handling, due to the heavy weight of the extra armour being piled on.

As the troubles in Northern Ireland increased in intensity and the IRA became armed with more sophisticated weaponry the level of armour protection on Pigs was once more increased. The IRA had begun using armour-piercing ammunition and RPG-7 rocket launchers which could destroy a Pig. The additional armour increased its weight from around six tons to a massive 7.5 tons, still on the same chassis and now designated as the Mk. II. In total nearly 500 Pigs were sent to Northern Ireland and the upgrading had to be done in batches with small numbers of vehicles being rotated back to England for the work to be completed.

Variations
The troubles in Northern Ireland led to other variants being developed which were still essentially the FV1611 version and these were given specific terms. For example, there was the ‘Flying Pig’ which was the basic vehicle fitted with large panels either side of the body and these could be folded out, like wings and hence the name; these were for troops to take cover behind when deployed to a riot situation. The ‘Squirt Pig’ was equipped with water cannon, the ‘Kremlin Pig’ was fitted with steel mesh covering to protect it from the Soviet-designed RPG- 7 and the ‘Foaming Pig’ was equipped with a system which produced volumes of thick foam to spray over an explosive device in an effort to deaden the effect of the blast should it detonate.

In the anti-riot role, headlights were covered in a wire mesh screen to prevent damage by rioters and some vehicles were fitted with smoke grenade launchers which could discharge projectile tear gas grenades to disperse rioters. Some vehicles were fitted with flexible screens between the front wheels which were intended to ‘sweep’ away any explosive devices which might detonate under the vehicle. These are sometimes displayed by re-enactment groups depicting the period of Northern Ireland.

At the other end of the scale an Anglo-Australian project to develop a specialised anti-tank version, known as the FV 1620, resulted in the version known as the Hornet. For this role the vehicle was greatly modified to take the launchers for two Australian-developed Malkara anti-tank missiles. It had a crew of three and carried two ready to fire missiles on the launchers and two reload missiles inside the vehicle. An example of this version can be seen at the Tank Museum at Bovington in Dorset.

End of Service
The Humber Pig was withdrawn from service gradually but some remained in service until the 1990s, which is not a bad legacy for a vehicle which was never intended for many of the roles it eventually served in. Despite its other roles, including the ambulance version, the Pig will forever be best remembered for its use in Northern Ireland as a poignant reminder of domestic troubles that got out of control.

Want One?
The Pig is available to purchase through various Websites or dealers such as the Aldershotbased Dave Joseph; telephone 01252 323897. ‘Flying Pigs’ are available as are standard versions with prices starting at around £3,500 for one in good condition. As historic vehicles they are exempt from road tax. Insurance can be arranged either through the MVT or IMPS military vehicle collector groups or a broker such as Adrian Flux. An example was sold recently by www.britishmilitaryvehicles. co.uk and the Website states ‘… new stocks of vehicles arriving all the time…’ so it might be worth keeping an eye on this site. The site of www.milweb.net has Pigs advertised for sale and even maintenance manuals for keeping up with the servicing. This is another of those vehicles which can be loaded up with all the gear for a full weekend or even be used to sleep in if the weather gets bad. They may not be the most handsome vehicle on the block but it is a slice of history of the British army worth preserving. GM