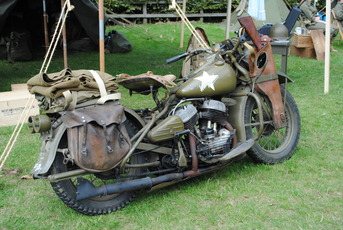 At the 2011 War & Peace Show there was a total of 215 motorcycles exhibited as official entries of which 34 were American-built Harley-Davidson covering the period from the 1940s to the 1990s. I know because I counted them all. Despite this figure of around 15% the motorcycle still remains the most overlooked vehicle used in war. Motorcycles are versatile, rugged machines capable of operating under some of the harshest conditions and yet they go largely un-noticed. However, there is something about motorcycles which gives them an appeal all their own. Many different types have been used by armies but the most iconic of all the designs is undeniably the range of Harley-Davidsons used by the US Army.

It was in 1903 that two friends - William S. Harley and Arthur Davidson - who were both motorcycle enthusiasts, set up the company which bore their name in Milwaukee in Wisconsin. The reputation of their machines spread so that even the US military were purchasing their motorcycles for use during the Mexican Border War in 1916. When America entered the First World War in 1917 Harley-Davidson would supply them with 15,000 machines. Between the wars times were hard but sales to the military still remained, but in reduced numbers. When America entered WW II in 1941 Harley-Davidson naturally supplied motorcycles to the army. This was the 740cc WL design which was given a suffix letter ‘A’ to denote Army and whilst the US Navy also used the motorcycles the army used the greatest numbers of the 90,000 machines supplied.

Harley-Davidson also built machines for the Canadian forces, known as 43 WLC and even supplied 30,000 to the Soviet Union under the Lend Lease Act from 1941. In 1942 the company built the XA model which was a copy of the German BMW R71 motorcycle, but it proved too expensive to produce and only around 1,000 were ever built. It still remains the only shaft-driven motorcycle Harley-Davidson ever produced and given the low numbers built they are rare. However, one version from 1942 was displayed at the 2011 War & Peace Show. The most commonly displayed machines are WLAs.

Production of the WLA was suspended after the war but when the Korean War broke out in 1950 production started again to continue until 1952. Today the US military still use Harley-Davidson motorcycles with modern 1990s designs making appearances, but it is still the WLA model which has the most appeal.

The Model 50 WLA was fitted with a 45 cubic inch (740cc) flat-head side-valve engine which could reach speeds up to 65mph. The machine weighed 562 Pounds and the fuel tank had a capacity of over three gallons to give an operational range of 120 miles. It could ford water obstacle up to 16 inches deep and panniers or saddlebags were fitted over the rear wheel for carrying various items of kit. A holster for the rider’s personal weapon was fitted by the front wheel for easy reach. The machine was used for duties such as convoy escort, traffic control, liaison roles and despatch riders.

So, now the question is where can they be obtained and what about spares? Also, how much do they cost? Modern machines from the 1990s can be picked up for prices from around £1,500 to £2,000 ready for the road. The dealership of LMS (Lichfield) Ltd is a good place to start for modern machines.  A spokesman told Gun Mart they sell around 30 modern Harley-Davidson motorcycles per month. The company can be contacted by telephone 01543 480600. Wesbite: www.lmslichfieldltd.com

There are Harley-Davidson dealerships all around the country and even on Jersey in the Channel Islands there is a very helpful place which can get parts for machine back to the 1970s. Wartime WLA models are available through www.milweb.net and a recent search turned up a fully restored example for £13,000 from an owner in the UK.

LMS told us of a Dutch-based dealer who specialises in wartime Harley-Davidson motorcycles near Arnhem. This is www.clementstrading.com and as well as selling fully restored WLA, price on application, spare parts can also be obtained. The company attends all the big shows in the UK including War & Peace. A check on the Internet reveals European prices for a 1943 WLA at around 17,500 Euros.

Some dealerships explained it should be possible to get cover from most dealers, but we asked our good friends at Adrian Flux (www.adrianfluw.co.uk) who gave the quote using the following details. The machine is kept in a secure brick-built garage with a locking door and the owner/rider having no motoring convictions over the last five years. Fully comprehensive cover for a 1942 WLA will cost £182.80 for unlimited mileage and includes break-down recovery in the UK and Europe. This will more than cover several good trips to events across the UK and road runs through Normandy or Arnhem for battlefield trips.

And finally, for some great pictures of WWII Harley Davidson motorcycles, visit www.theliberator.be