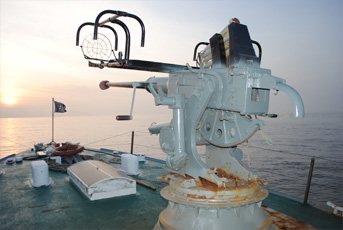 As regular readers of the Militaria Mart section of the magazine will be aware, I am ready, willing and eager to engage in any activity relating to re-enactment in order to give a good story. Over the years I have been on vehicles and boats, taken part in battles and just turned up on parade. However, nothing could have prepared me for the experience which happened during a recent visit to Watchet on the north-west Somerset coast. For those who may not know, Watchet is a small, quiet harbour near Porlock and is otherwise quite unremarkable. It is a typical tourist seaside town and the reason for my visit was to see for myself a former Royal Navy patrol boat which I had heard about.

From Floating Tea-Room Back To R Patrol Boat

With the intention of taking photographs I arrived at the harbour equipped with my camera and quickly spotted the boat which stood out from the other vessels in the harbour due to its grey paint finish, but also for the fact that it had a 40mm Bofors gun on the foredeck, a 20mm Oerlikon cannon on the stern and torpedo tubes on either side. Strolling down the slipway to get a better vantage point from where to take my photographs a figure appeared on the deck and glanced towards me. He climbed down the gangway and opened the security gate leading to the pontoon staging where the boat was moored. He introduced himself as Paul Childs, the owner, who happened to be on board doing some restoration work.

A very friendly chap he invited me down to have a closer inspection and tour around the boat. My wife Elizabeth joined me and we climbed aboard and Paul began to tell us the history of the boat which is P1041 and called HMS Gay Archer, one of 12 such vessels built in the early 1950s in the ‘Gay’ Class. The Gay Archer was built by Vosper in Portsmouth and was launched in August 1952. She had a distinguished career and even took part in a couple of films including ‘The Ship That Died of Shame’ starring Richard Attenborough. Paul explained that he acquired the boat under extraordinary circumstances from an elderly lady who had been using it to serve teas and refreshments! He is now engaged in a one-man full restoration programme.
Paul has completed most of the work himself including the installation of two new engines to replace the original three Packard engines which would have powered the boat to speeds up to 43 knots.

Built of teak wood from Honduras the Gay Archer is the last of her kind. Measuring 75 feet and two inches in length with a beam (width) of 20 feet and one inch the boat was operated by a crew of 12 when in operational service and weighed 50 tons. In addition to the main armament anti-aircraft rocket launchers were also fitted. After all the details had been explained Paul then enquired if I would be around later in the day as he was going to take the boat out to sea for a test run. Thinking it would be a good opportunity to get some action photographs I said I would. He then stunned me by inviting Elizabeth and myself to join him for the trip.

Late in the afternoon we reported back to the Gay Archer where we were joined by a couple of other people. Paul said that I had to work for my trip by acting as a ‘running fender’ as the boat moved out of the small harbour. What this meant was that I had to hold a large rubber buffer to protect the side of boat from scraping the stone wall of the harbour and walk the length as we moved out. We moved slowly out of the harbour and then when several hundred yards out Paul opened the throttle and the pair of powerful turbo-charged engines thrust the boat easily through the water. He then spoke to one of our companions who climbed up to the wheelhouse and took the helm.

Paul then explained that we were being steered by Able Seaman Bill Bolton who was a war veteran who had served on Motor Torpedo Boats during the war. It transpired that Bill had served on MTBs which operated between Scotland and Norway ferrying secret agents and later he served for two years in the Mediterranean and supported Operation Husky, the invasion of Sicily in 1943. Bill showed us some great photographs of himself and his crew-mates from the war and told how he had come under air attack when he sailed from England to Gibraltar. With such stories and the powerful engines driving us through the water it was easy to imagine being part of the action and it was an unforgettable experience. The Gay Archer was a post war design but was of the type of boat used during the war. The experience was more than I could have hoped for and Elizabeth thrilled to the voyage, knowing that she was part of history, also.

We were out for over an hour and given the size of the engines the amount of fuel used must have been enormous as we cut through the water with ease and grace with each turn. Paul explained that during the war these boats would have been floating fuel tanks loaded with ammunition for the guns. If one exploded, being made of wood, there was not a great deal left. The Gay Archer is a unique vessel and one deserving of our support, so if anyone would like to help they can find out more on the Internet through one of the Websites by typing in Gay Archer or P1041 as key search words. We returned to the harbour and once again I was ‘running fender’ and we moored up. Our short trip was like being in a Formula One racing car, but at sea. Things do not come much better than that and I extend my sincere gratitude to Paul Childs for the experience and wish him all the best of possible luck in completing his restoration of Gay Archer. Long may they sail.