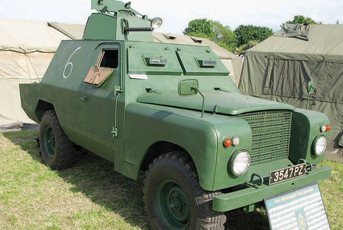 In 1969 a series of civil disturbances in Northern Ireland erupted leading the British Government of the day to deploy troops to the Province to help deal with the crisis. The ‘Troubles’ as the situation became known would last for almost 30 years and involved the deployment of thousands of troops to patrol the streets during that time. With the end of the Troubles a number of vehicles used by security forces were ‘retired’ from service and some are now in private ownership. One such design of vehicle is the Shorland Armoured Patrol Vehicle and today, more than forty years after it was designed, the civilian owners of these vehicles drive them to gatherings around Britain where they show what was developed for the specialist Internal Security role ‘urban environment’ of Belfast.

The Shorland was developed at the request of the Royal Ulster Constabulary but some were later used by the military.  The vehicle was a joint venture between Short Brothers and Harland Ltd and the first prototype was built in 1965. Based on the long wheelbase Land Rover chassis and built by Short Brothers the name of Shorland was adopted for the 4X4 vehicle. The first version, known as the Mk1, was fitted with a four-cylinder petrol engine which developed 67bhp at 4,100rpm and had armour protection of 7.25mm thickness. It was always intended to be a police vehicle and originally developed for anti-smuggling duties to patrol the border with the Irish Republic to the south, but it proved to be well suited to roles in built-up areas.

The Mk 2 followed shortly after and this was fitted with a more powerful engine and had armour protection of 8.25mm thickness. The vehicles when fitted with a standard fuel tank had an operational range of over 300km which was ample for street patrols. Some Shorlands were fitted with a version of the turret fitted to the Ferret Mk II scout car to allow the vehicle to be armed with a .30 inch calibre machine gun, but these were later transferred to Ulster Defence Regiment. The RUC operated some 450 armoured Land Rovers at the height of the Troubles in Northern Ireland.

The Mk 3 with a 91bhp engine and improved armour protection was introduced in 1972 and by that time the distinctive ‘boat-tail’ feature protruding from the rear of the vehicle gave it a unique appearance. The Shorland was sold to overseas countries and by the middle of 1975 more than 400 vehicles had been sold to 20 countries.

The last true version of the Shorland appeared in 1980 and this was the Mk 4 fitted with a 3.5 litre Rover V-8 petrol engine. Another range called the Series 5 was based on the Land Rover ‘Defender’ 110 chassis and either a 3.5 litre Rover V-8 petrol engine or a 2.5 litre Rover Tdi Turbo diesel engine could be fitted. The armour was welded and the design laced the turret. The Series 5 went to four versions, each specialised. The S52 was an armoured patrol car; the S53 was an air defence vehicle; the S54 was an anti-hijack vehicle and the S55 was an armoured personnel carrier. These and other earlier versions of the Shorland are still to be found in service with some of the original operating countries.

The basic Mk 3 version was operated by a crew of three men, commander, driver and gunner, and with radio communication they could summon support vehicles in the event of difficulties. The vehicle weighed 2,931 kg empty but 3,360kg when fully laden for operation duties due to the armour which gave protection against small arms fire. A total of 1,500 rounds were carried for the machine gun and smoke grenade dischargers were mounted either on the turret or on the front wheel arch. The Shorland measured 4.597m in length, 1.778m in width and 2.286m to the top of the turret. The vehicle was not designed to cope with obstacles apart from illegal barricades erected during riots. Ground clearance was kept down to only 210mm and some vehicles had flexible panels fitted to the front so that any explosive device thrown in front would be swept away rather than let the vehicle passing over it. The Mk 3 was fitted with a Rover six-cylinder petrol engine developing 91bhp at 1,750rpm to give roads speeds of over 88km/h.

Armoured screens were fitted over the windscreen and side windows in the doors and these could be lowered to protect the crew and vision was maintained through vision blocks. The turret had full 360 degree traverse and was operated by the machine gunner’s feet. It was open-topped but some were fitted with lightweight screens which could be lowered to prevent objects such as grenades from being thrown into the vehicle. The boat-tail was actually the boot for storing the spare tyre and other items such as signs when operating as a vehicle check point. The interior of the vehicle was lined with sheets of polyurethane foam to act as an anti-spall liner in the event that hostile fire should penetrate the armour.

Today a number are taken to various shows and private owners can drive them on the roads as any normal Land Rover and in that respect travelling to events and shows is easy. In fact, over the years a number have made appearances at the War & Peace Show. A Shorland Mk 3 with 32,000 miles on the clock was offered for sale several years ago priced £2,500. It required a lot of restoration but the owner was selling it with a range of spares. This tells us that they are out there and if anyone is interested in owning a vehicle which represents a chapter in the way in which Britain dealt with the situation in Northern Ireland it is there for the buying. GM