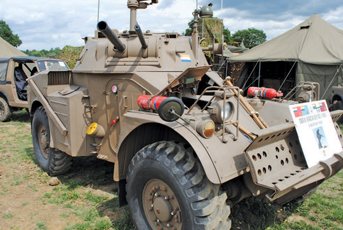 No-one knows for sure who first said “Necessity is the mother of invention”, but over the years the expression has been used many times particularly to describe the conditions when a country is forced into producing something which it is not normally believed capable of doing. This was certainly the case for South Africa in the early 1960s when it required modern armoured fighting vehicles for its army but arms embargoes prevented it from purchasing from certain overseas producers.

Negotiations between South Africa and the French company of Panhard led to the signing of an agreement whereby Panhard would supply a number of Auto-Mitrailleuse Lègère (AML) light armoured cars after which a manufacturer in South Africa would be granted a licence to build the vehicle in that country.

Panhard supplied the first 100 vehicles and then the South African company of Sandock-Austral Ltd began to build the AML245 version which became the Eland with the first vehicles being delivered to the South African Defence Force (SADF) in 1964. The AML was a versatile design being capable of mounting a 20mm cannon or a 90mm gun in turrets and known as the Eland 20 and Eland 90 respectively.

This was a design feature the French particularly excelled in by producing a vehicle which could be adopted to carry ‘…something for every occasion…’ and the AML design could certainly do that.

Another of these designs was the Eland Mk 7 which was armed with a breech-loading 60mm mortar mounted in a turret. This gave the weapon a full 360 degree traverse and could be elevated so that it could fire both directly and indirectly at targets. The mortar could be used to fire a range of ammunition including smoke, illuminating, canister and high explosive. Secondary armament comprised of two machine guns of 7.62mm calibre. One machine gun was mounted co-axially alongside the mortar in the turret and the other was fitted to a pintel mounting on the roof of the turret. This could be removed if necessary and took only a few seconds to fit into place. The vehicle was very handy and deployed on patrol duties along the Namibia and Angola borders.

Served by a crew of three the Eland 7-60 weighed 5.3 tonnes and had an operational range of 450km on roads and 240km cross country. The Eland 7 was 4X4 drive and measured 3.79m in length, 1.97m in width and 2.07m in height to the top of the turret. It was powered by a rear-mounted Panhard Model 4 HD four-cylinder air-cooled petrol engine which develops 90hp at 4,700RPM to produce road speeds up to 90km/h. The vehicle was in service between 1962 and 1990 when more modern designs replaced it. Sandock built a further 500 vehicles for the SADF and final production rate was 1,300 vehicles and it was sold to a number of countries in the region. It was equipped with full radio communications systems and night vision equipment for full operational readiness. Some versions carrying the 60mm mortar were equipped with either a 7.62mm calibre machine gun, a 12.7mm heavy machine gun or a 20mm cannon as secondary armament for self-defence.

AMLs in the Falklands

Other countries around the world also used variants of the AML, including Argentina which deployed AML-90 versions to the Falkland Islands in 1982. Two were captured intact when the British army liberated the islands and today these are on display at the Combermere Barracks in Windsor, Berkshire, England.

Other variants of the AML are to be found in museums and the UK-based SADF Living History Group (www.sadfgroup.org) has an example of the Eland 7-60 which it displays at events around the country including the War & Peace Show where it has been used to form part of the group’s comprehensive display of the wars fought by South Africa. This group is worth contacting if a vehicle enthusiast is interested in restoring a vehicle of this type because much detail and information can be gained by close inspection and no doubt members of the group can pass on information. The Tank Museum at Bovington in Dorset has also acquired an example of the AML armed with a turret-mounted 60mm mortar and this is now being included in the museum’s displays outside.

A recent search on the specialist Websites which deal with sales of ex-military vehicles revealed that AML90 and variants such as Eland 20 and 60mm mortar versions are available for purchase. Indeed in early 2012 an owner reported that he had acquired an AML 60 which he had purchased privately for £12,250. It was without weapons and some of the ancillary parts were missing, but apart from that it was in quite good condition. After some restoration work it would be good enough to display at a vehicle gathering and road worthy with all the correct paperwork and insurance. GM