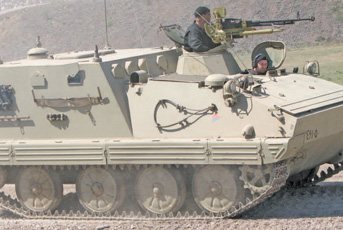 Over the years China has copied many Soviet designs of weaponry and armoured fighting vehicles, but all this began to change in the late 1960s when the country started producing its own vehicles, which although still showing signs of Soviet influence, were of Chinese design.

One such vehicle was the Type 63 APC which had an industrialised designation of YW531.

Built by the state company of Norinco, some 3,000 Type 63 vehicles were produced with the first batch entering service in 1970. The vehicles were produced with two types of engine, with the export versions being fitted with the German-designed Deutz eight-cylinder BF8L 413F. These diesel engines were set to the front on the right hand side and developed 320hp at 2500rpm to give a road speed of 65km/h which dropped to 46km/h when operating cross-country. The vehicle had a fuel capacity of 450 litres which gave this export design an operational road range of 500km. The hull was made of welded steel 14mm thick which provided a degree of some protection against small arms fire and in the basic APC version fifteen men could be carried including the driver.

The vehicle was not fitted with return rollers and so the tracks ran entirely on the four road wheels with the idler wheel set to the rear and the drive sprocket set to the front. Suspension was of the torsion bar type and the vehicle had amphibious capabilities.

A series of several versions were built for the Chinese army including ambulance and communications vehicles and even a version to launch rocket artillery.

For the export market an equally versatile range was developed and these were given the prefix letters of ‘YW’ and built in a variety of roles including ambulance, self-propelled mortar carriers, APC and the YW701 Armoured Command Vehicle. This latter vehicle was armed with a 12.7mm calibre machine gun which could traverse through 360 degrees for all-round self-defence. A single large hinged door at the rear and two roof hatches allowed the crew access to the vehicle.

A number of these variants were sold to Middle East armies including Iraq which deployed them during the 1990 invasion of Kuwait. When the Allied Coalition forces attacked Iraq in Operation Desert Storm in 1991 a number of YW701 Armoured Command Vehicles were captured intact, because its specialist role meant it was never likely to serve in front line areas where it would be engaged by heavier vehicles.  Some examples of the YW701 were still complete with their on-board equipment including banks of five radio sets. Several of these vehicles captured in Kuwait were taken to America where they were evaluated at the Aberdeen Proving Ground in Maryland. In addition, numbers of these vehicles have since been sent to museums around the world such as the Puckapunyal Military Museum in Australia.

One YW701 found its way to the Bovington Tank Museum in Dorset, where it sometimes participates in mobility displays. These demonstrations allow enthusiasts to see the vehicle up close and personal when it is parked up on the static line in between displays. During the mobility displays when it is driven around the arena it can be filmed and photographed for reference.

The YW701 weighs 12,600kg and measures 5.48m in length and 2.98m in width. Height is 2.85m and the rear superstructure is built slightly higher to give additional space in the radio compartment. This feature gives the vehicle a distinct ‘box-like’ appearance and indicates this is a specialist armoured communications vehicles intended to provide commanders with communications and to keep pace with armoured units on the move.

The YW701 is still in service in Iran, North Korea, Pakistan and several other countries. Examples are available to purchase and some specialist Websites sell spare parts for the vehicle and its variants. However, due to the low numbers built the YW701 will remain one of those unusual vehicles but from the owner’s point of view and the enthusiast’s point of view it is an interesting vehicle and guaranteed to turn heads at displays. GM