Apache Warrior versus US Cavalryman 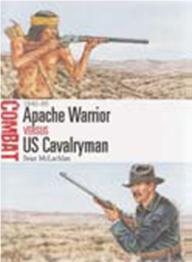 There is a male generation of a ‘certain age’, which, as young boys, grew up watching western films and playing ‘cowboys and indians’ after watching these movies.

Today, we are more enlightened and films show them as the noble Native North American and cowboys and Indians are not acceptable as games. This work covers a period of forty years of battle between the Apache and the US Cavalry, equipped with rifles, horses and railways at its disposal.

The fact it took that long to suppress an otherwise unsophisticated enemy says much about the martial skills of the Apache. The US Cavalry resorted to using Apache as scouts, which says much. Forget western novels, this is historical fact and true first-hand accounts of firefights and battles. It is hard to resist a book such as this and readers will have a different opinion after this work.