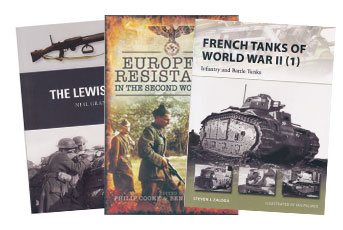 The editors have brought together a range of leading historians each an expert in resistance in occupied countries during WW II. They have produced a work that can be read from start to finish or by choice of country. From the subtle form of resistance, such as the use of drying laundry in national colours, to full-blown battles this book contains it all. Resistance was to be found in all occupied countries including Greece and surprisingly even Italy from 1943 onwards. The cost in human lives at places such as Lidice in Czechoslovakia and Oradour-sur-Glane in France is counted. The numbers of aircraft involved in these operations and the amount of supplies dropped will surprise readers. A very small amount of arms and equipment were even flown to German to show that all were not loyal to Hitler. A fascinating aspect of the war, which is frequently ignored, told in an absorbing way.

If weapons were judged on the number of films in which they have appeared, then the Lewis Gun would be a ‘super-star’. From productions as diverse as the 1966 film The Professionals starring Lee Marvin through to Star Wars in 1977, the Lewis Gun has starred in some classic war films. The author charts the weapon from its very beginning and carefully leads the reader through its history, which saw it still being used during the Korean War. Usually regarded as an aircraft weapon in WW I the Lewis gun was eventually used by all branches of the armed forces and captured examples were also used by the Germans. It was a versatile and reliable weapon, attested to by the fact that the British LRDG used it in the desert in WW II. It was copied by the Japanese as the Type 92 and Britain’s Home Guard used it too. This book will appeal to weapons collectors and re-enactors alike who will be able to use it like a maintenance manual to service this famous light machine gun.

When a reader picks up a book by the author of this title they know they are in good hands. This is a prime example which has the widest possible appeal to all interest from modeller to military enthusiast. It is the first in a two-part look at the French armour leading up to the eve of the German attack in May 1940. The author lays out the development history of each tank and some of the lesser-known types. A lot of detail has been packed into this volume, which will lead to some readers reassessing their opinion of French armour. For example in 1930 no tanks were produced but over the next decade the French Army would have 3,415 tanks in service which was more than Germany.  Projected designs, the financial cost and the capability of the French armoured force will hold the reader’s attention.

A GUIDE TO WARTIME COLLECTABLES

Collecting militaria has never been out of fashion and as long as there are armies it will remain so. There is a fascination with collecting all things military which has led to a whole industry being created which in turn is supported by specialist dealers’ fairs.  The author is a collector and drawing on personal experience has put together this useful book, which can be used as an introductory guide to new collectors. He deals with a range of collectables from paper such as posters through to uniforms and he even touches on weapons. There is a chapter on how to spot fakes and replicas and this is very helpful. The illustrations are good and show what is being mentioned. He draws a lot on Southsea-based trader Sabre Sales, but this company will soon be closing down and has been confirmed by Nick Hall the owner. The book still remains very useful for collectors all the same.

THE COVER UP AT OMAHA BEACH

This year sees the 70th anniversary of the Normandy Landings and we can expect to see more memorials being raised to commemorate the veterans whose numbers are sadly getting fewer. We think we know as much as there is to possibly be to know about this operation, but the truth is there is probably much more to know. The author purchased the site of an artillery battery known as Grandcamp Maisy and set about excavating it. What he discovered was incredible enough but his research led him to investigate the battle plan to attack the site revealed even more surprises. This is a work of detection and diligence to work out what happened and why the site disappeared before he uncovered it again. Amazing first-hand accounts supported by great photographs will make the reader want to go and see it for themselves. This is one to add to your Normandy library.

German armoured vehicles from WW II continue to fascinate vehicle collectors, modellers and general enthusiasts alike, even after all these years and it looks set to remain so for a long time to come. More archive film is being uncovered all the time and this work shows some of that material in black and white footage. Some images are very obviously training or propaganda film but there is also some dramatic combat footage. The scenes show the terrible conditions of the Russian Front and in other occupied countries, so the viewer sees an overall picture of combat. Some of the more recognisable tanks and SPGs are shown in action in campaigns in France, Poland and Greece. Panzer II light tanks and the heavier tank destroyers will provide modellers with many ideas. The extras show the victory over France in 1940 and the assault guns and tank hunters which is the main theme of this film.