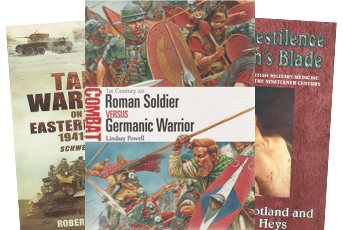 We tend to think about war crimes as being something committed during WW II by the Nazi regime. Atrocities have always been committed during time of war, such as King Richard I of England who ordered 2,700 Muslims to be ‘put to the sword’ at Acre in August 1191. This small work covers a period of 100 years from WW I to present day and draws on reports which appeared in the Daily Mirror newspaper. It is not an in-depth look at war crimes but serves to remind us how such actions have been covered by journalists such as John Pilger. This title would serve as a useful introduction to the subject for students by revealing such actions through modern media reporting. There are some omissions but the truly heinous are here along with the sentences served out by justice.

MY ADVENTURES AS A SPY.

This work ﬁrst appeared in 1915 and the author who founded the Boy Scout Movement already had a distinguished military service under his belt. It is written in a style of the day which to modern readers is very ‘Boys Own’ stuff and does not go into too much depth. At the time of its appearance WW I was in full force and spy mania was abounding. His personal accounts of how he was able to include plans of military defences into the drawings of butterﬂ y wings and leaves is so simple as to be unbelievable and yet it worked as we see by his illustrations. He took chances and ran great risks to secure information and they paid off with results. This is not high espionage but basic tricks used by one man and even after a century it reads very well.

This book starts out well but unfortunately it tails off towards the end as though the author has run out of things to say about the subject. This is unfortunate and certainly uncharacteristic because he is an expert in his ﬁeld of small arms and has written some excellent works. He tells the development, use and operational qualities of the weapons and reminds the reader that it was the rugged simplicity of the weapons which allowed them to be used in many conﬂ icts after WW II including the Vietnam War. What he does tell us in combination with some highly detailed cut-away diagrams is in keeping with the format like a weapon manual.

Collectors will like the book and ﬁrearms enthusiasts will ﬁnd the illustrations very good and may add something to their understanding of a series of weapons which are icons of WW II in their own right.

The war on the Eastern Front in WW II was conducted on a vast scale and the numbers of books recounting this history is also vast. Some of these are good, but this one is excellent. It is a good solid read, packed full of meticulous details, which are supported by being presented in an accessible way. There is never a dull page in this well researched work which includes ﬁrst-hand accounts. The book begins with the preparations and build up for the attack against Russia and ends with the Russians preparations and tank battles to eliminate the Germans at Stalingrad. The appendix lists with tank losses and production will certainly make the reader think deep and hard. The ﬁgures are startling and hard to believe, but they are true. If you are going to read a book about the early operations about the war in Russia, make it this one.

WARS, PESTILENCE AND THE SURGEON’S BLADE

This is an absorbing book for any student of 19th century military history. If ever a reader wanted to know how wounds were treated and amputations conducted this tells it all. All the names of the leading surgeons of the day are listed here including Sir Charles Bell, Larrey and Guthrie. All the wars and campaigns are covered and lists can be scrutinised. Anecdotes include the argument between James Barry, a surgeon, and Florence Nightingale concerning treatment during the Crimean War. That would have been one to see because Barry was a woman disguised as a man which was not discovered until after his/her death. The first use of anaesthetics in warfare and the surgeon who killed three people as the result of amputating a man’s leg make this a highly readable book. It is a work which will draw you back many times.

There is something about books involving Roman Legions doing battle against the barbarian tribes which appeals to modellers, war gamers and history enthusiasts alike. The subject is also popular with re-enactors and specialist tour companies even take visitors to the locations of battles from this period. This latest work in the Combat series compares the Roman legionary against the strength of the Germanic warrior, probably the strongest of all the adversaries which the legions fought. The weapons, tactics and battle lines are all discussed in this compact volume. The troops on both sides would come to respect each other’s prowess as fighters and this is something the author expresses. His opinions on strategies and weapon capabilities come from a deep-rooted knowledge of his subject and he is well known to the famous Ermine Street Guard. War gamers will benefit from details of how early Roman artillery such as the ballista were used and what injuries the projectiles infl icted. Modellers will appreciate the detail of the art work and details of the recreated weaponry and armour. This is another book on a popular subject to add to one’s library of ancient military history.