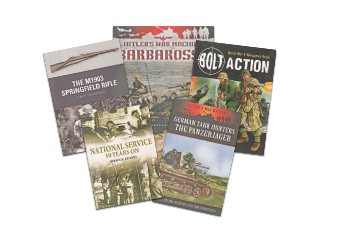 The Weapon Series by Osprey continues to get better with each new release and this latest work full of anecdotal references supported by fascinating illustrations hits the mark. The artwork has returned to its excellent quality and the detailed photography of the Springfield rifle will satisfy collectors and shooters alike. The weapon saw service throughout WW I, being famously used by Sergeant Alvin York, and continued through WW II and there were even sniper versions being used during the Korean War.

This is the history of a rifle with history and many famous names attached to it, some of which will surprise readers. A lot has been packed into this work and the collectors will be interested to compare prices of original production models to what is being paid today. The Springfield is still popular with shooters around the world and there is still life in it yet which will continue with this work.

During WW II the German Army took the tactic of destroying tanks very seriously, either at long range with anti-tank guns or up close and personal with demolition charges. Gun crews painted the tally of their kills on the gun shield and the infantry were rewarded with special badges called ‘Panzervernichtungsabzeichen’ (tank destruction badges). This work looks at the range of weapons available for destroying tanks and the tactics used by the various services from artillery to AFVs and infantry. There are anecdotes for all types of weapons.

The book also covers the various theatres of fighting. The reader will find the obvious ‘88’ guns, Panzerfaust and some unusual weapon types listed. The line illustrations and photographs will make this book useful to re-enactors and modellers alike who can use it as a reference source knowing the material is accurate.

Adolf Hitler proclaimed himself to be the greatest fortress builder of all time. After 1940 this claim certainly held true as the German Army built defences along thousands of miles of European coastline stretching from Norway down to the borders of Spain. This book covers the section of those defences in the Pas de Calais area where the Germans located the heavy guns capable of firing shells across the Channel guns to hit Dover. It was also the area where the Germans believed the Allies would land their invasion force. This work looks at the installations from the smallest to the largest and examines how they were built by the Organisation Todt and slave labour. Many of these installations have survived and are open to the public and this book lists some of those places to visit. For anyone interested in German bunkers this is a must have book.

Much has been written about the Blitzkrieg into France and many documentaries have also been filmed about the same campaign, so it is refreshing to see this documentary film on the first campaigns of the war. Translated from the original language film footage taken between August and October 1939 the viewer can see what the cameraman saw and was experienced by the fighting man. This is archive film from the stock taken by the German Propaganda Kompanien and it makes for absorbing viewing. The fate of Poland is often overlooked but we need reminding that this is where the Second World War began. Images show air raids, the plight of the civilians and ground forces in action. For anyone interested in original archival material this will add to your library.

Operation Barbarossa, the German attack on Russia, began on 22 June 1941 taking everybody, including Stalin, by surprise. The sheer weight of numbers and the scale of the attack surpassed anything previously seen. At first everything seemed to be going in Germany’s favour but by the winter they had been stopped before Moscow and there were scenes of what was yet to come. Undaunted, the Germans continued to pour men and equipment into the campaign. This film uses archive material taken by the German Propaganda Kompanien to show the fierce fighting and the vastness of the operation. Translated into English the viewer is reminded that between 1941 and 1944 the German Army suffered 95% of all its casualties during the war in Russia. This documentary is a reference for historians, modellers and war gamers alike.

There was a time when war gaming was considered as not being serious, but it has never waned in popularity despite this image. Indeed, today it is a hugely popular pastime being enjoyed by clubs on an international scale. Osprey is not the first publisher to recognise this and tap into the market, but it is the way in which the hobby is being approached. This work is one in a series of titles called ‘Bolt Action’ and is produced by wargamers who are recognised and respected names in the world of war gaming. Scenarios are examined and explained and why some moves can be permitted and others cannot. This is a work to instruct new-comers to the hobby and induct existing wargamers into a different period. Table top battles can last up to days, but generally they are concluded in a couple of hours. This book will hold the reader’s attention for longer than that.

Memories of time spent on National Service are mixed. Mostly it was hated but some who served still remember their time with fondness. There are some famous names who served in the ranks of the army, such as the stage magician Paul Daniels who joined the 1st Battalion Green Howards and served in Hong Kong. It is now fifty years since the last National serviceman was ‘demobbed’ and the author, himself a former officer, takes the reader on a tour of all aspects from training to selection for officer material. National Service threw together men from all backgrounds and some forged a friendship which lasts to this day. Of those called up around 70% went into the army, and the author reminds us that two per cent went into the Royal Navy and the rest into the RAF. There are some who call for National service to return and the final chapter expresses why it could never come back. For those who served, this is a true sentimental journey.