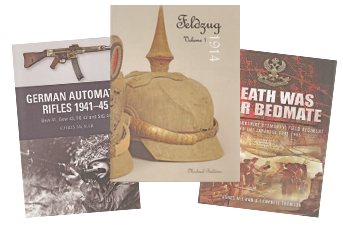 Some types of militaria are rare and extremely fragile, which serious collectors are all too aware of and for the rest of us it takes a volume like this latest offering from MMP to remind us of the fact. The author is a recognised collector and in this work he shares items of Imperial German Army artefacts from 1914. The publisher has only been producing books since July 2011 but the quality of the images and format is that of a much more experienced company. The highly detailed images showing the textiles and stitching of uniforms makes this another essential volume for the collector and museums should have these works as references for their uniform collections. Volume two covering 1915, from the same author, will be available in the summer and we are promised the same high quality of presentation. That makes it worth looking forward to and going on-line to order in advance. This is a book to keep enjoying and admire the collection of a dedicated militaria enthusiast.

DEATH WAS OUR BEDMATE

When the war began in the Far East in December 1941 the whole of Europe was under German occupation and Hitler’s armies were on the outskirts of Moscow. The bastions with any chance of holding out against the Japanese onslaught appeared to be Hong Kong and Singapore. When the former surrendered on Christmas Day 1941 and the fortress of Singapore surrendering on 15 February 1942 the defenders became prisoners of the Japanese and ahead of them lay more than three years of unimaginable hardship and terror. The father of Agnes McEwan was one of those taken prisoner and this book tells of his time and how he survived. It contains the stories of other prisoners and how they fought the enemies of hunger and disease, and endured the brutality inflicted on them by Japanese guards. It makes for revealing reading to learn the lengths men went to in order to obtain just a handful of nuts and the punishment for being accused of stealing food. This book is up there with other classics of surviving as a Japanese POW such as The War Diaries of Weary Dunlop.

Books published by Osprey offer great value for money and this latest title in the ‘Weapon’ series is no exception. Full of great detailed photographs of the automatic rifles used by the German Army during WW II this is an ideal book for weapon historians and collectors. The text is informative and full of facts which will satisfy normal levels of enthusiasm for rifles. It is well known that a lot of technology developed by Germany during the war influenced post war design for tanks and aircraft, but this book reminds us that this also included rifles and machine guns. For example the delayed roller blowback method of operation was developed during the war. This book covers all the well-known automatic rifles and introduces the reader to some lesser known types which are all fascinating to learn about.

THE PIN-UP IN WORLD WAR II

The nose art which appeared on aircraft of the USAAF during WW II was saucy and rather racy, but never vulgar. These images have become icons of the war but there was also the ‘pin-up’ both photographic and artwork. This book has a brief but very informative text to accompany what is in effect a photo-album. The images were reproduced on postcards, posters and popular magazines of the armed forces. The author includes American and some German images and explains how they pleased servicemen in all armies everywhere, such as the cartoon character of Jane for the British serviceman. Some artists like Vargas became famous for these images. This book is the equivalent of the Donald McGill saucy postcards and is just as cheeky. Read it and enjoy it is guaranteed to make you smile.

Today civilians use a number of things they take for granted such as ‘Roll-on Roll-off’ ferries and the fact that foodstuffs are handled in bulk without giving a thought as to how these came about. This book provides the answer by telling how such things were developed for the back-up to support the landings on D-Day. Special mine clearance vehicles, engineering vehicles and communications were developed for the military and today almost 70 years on armies are still using systems based on the systems developed for the same landings. The reader may be familiar with many items covered in this work but others will come as a surprise. The chapter on the Mulberry Harbours will please those interested in military engineering and the chapter on gliders will be interesting to modellers and aviation enthusiasts alike.  The book as whole adds much to the understanding of the D-Day and what went into its organisation.

VIETNAM AFTER THE FIRE. DVD

Re-released twenty-five years after it was originally made available, this film shows why historians, modellers and re-enactors are still fascinated with the Vietnam War more than forty years after America lost the fight. General Curtis Le May, with typical WW II thinking, declared the Vietcong would be ‘Bombed back to the stone age’. For all the technology at its disposal America failed for many reasons, not the least because it underestimated the tenacity of a formidable enemy. Millions of troops served in the war and from an ecological point of view the country was devastated. Despite this the country survived and recovered with the irony that veterans now return as tourists. Through the use of original footage this film reminds us of the wide scale events which ripped the country to shreds and modern film shows how the clean-up operation to remove millions of items of unexploded ordnance continues to this day.

The German Blitzkrieg against France began in May 1940 and has been seen by viewers from many angles by historians many times over. This latest offering as part of ‘Hitler’s War Machine’ series uses archive footage taken by the German Propaganda Kompanien and translated with English sub-titles. The film covers the fall of Holland and how the brunt of the attack fell on France and shows how fast-paced war really is. Bridges which were destroyed by the French are no obstacle to German engineers, and troops are shown crossing rivers and anti-tank ditches as though on field exercise. This film also shows the full range of weaponry at the disposal of the German army and even how troops were flown into battle by aircraft such as Junkers Ju52. The ferocity of the artillery barrage, tank assault and infantry attack are all contained in this film for historians, modellers and war gamers alike to study.