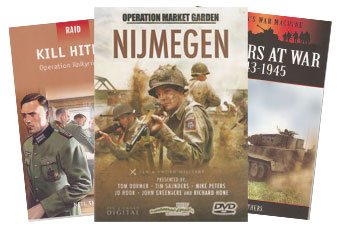 To fully understand an operation as complex as Market Garden to attack the Dutch bridges leading up to the Rhine River it is necessary to break it down into chapters. This film from the highly respected team of historians headed up by Tim Saunders tackles the subject of the American battle to seize Nijmegen Bridge. The presenters are all experienced battlefield tour guides and together they take the viewer on a trip around the battleground where the US 82nd Airborne Division fought some of the toughest actions in it unit history. Between themselves the presenters debate the action and with the use of maps they explain to the viewer what happened. The bridge itself is famous for not being destroyed and the reasons behind that are discussed. Veterans’ accounts and archive footage make this a way of understanding this part of Operation Market Garden.

This is the second volume in the Panzers at War by the same author and takes the history of Germany’s armoured units from the battle of Kursk to the final days of the war and the fighting in Berlin. The author keeps things to the basic level but also deals with some queries such as the way in which the tanks were numbered. This work covers the heavyweight tanks such as the Tiger, Panther and the monstrous ‘Maus’ and E-100 projects. Campaigns in Italy and Normandy and the Ardennes are covered here in a way which the author assumes the reader has prior knowledge. The illustrations are grainy but there are some new images and the appendix covering divisional formation is useful. This is a useful book good for war gamers and modellers.

During the course of his political career there were many attempts to kill Hitler, the most famous of which is the ill-fated plot on 20 July 1944. Known as ‘Operation Valkyrie’ it has been criticised as being conducted too late in the war to do anything to affect the outcome of the war. The author does a very good job with a complicated subject and sticks to the details. After laying out the background he takes the reader through a countdown to the bomb plot and the hours immediately after the explosion. One cannot help but think ‘what if it had worked’ and Hitler had been killed in the explosion. Many of the buildings central to the plot still exist including the one used by the plotters as their HQ in Berlin and is now a museum to the resistance against Nazism. This book is very readable and the map of the precinct where events unfolded in Berlin can be used as a guide by anyone wishing to visit the sites for themselves.

The genre of the ‘Western’ either as a feature film or book is a perennial favourite subject. Even documentaries make for fascinating and revealing viewing. One topic in this category which never fails to interest is the so-called ‘Gun-fight at the OK Corral’. Much has been written about this incident which lasted less than 30 seconds and films have also been made such is the impact on modern culture. This latest work in the Raid Series is a condensed but extremely concise look at the facts surrounding the shootout and the aftermath. The author does not ramble and sticks to the facts connected with the shoot-out and this allows him to cover a lot of ground. For those readers interested in weapons from this period they will enjoy the description of the various methods of ‘drawing’ a gun along with details of the weapons themselves. This is a nice introduction to western history for an enthusiast looking for something different.

This is the eagerly-awaited second volume in the series which describes in fine detail the uniform and equipment of the Imperial German Army in the First World War. The author uses items from his own collection which have been photographed with incredible detail to illustrate the work throughout. Some items have anecdotal stories with them such as the field cap presented by a German POW and has made its way into the author’s collection. He covers each item and explains particular methods of stitching and highlights specific points which collectors should look for when acquiring an item. This work explains even the most ephemeral item such as the train driver’s cap and museums must be envious of such a private collection. This takes the history up to 1915 and we are promised further volumes. Collectors will delight in such news and general readers will also enjoy the book for the background to so many items.

Many historically famous regiments fought during the Normandy Campaign in 1944 and this is the story of the Adolf Hitler SS Panzer Division. This was one of the units which was kept in reserve in the Pas de Calais in case the Allies should land there and this film tells the unit’s history from when it was committed to battle in Normandy. The production crew behind this film are respected historians and they use this experience along with their knowledge as battlefield tour guides to take the viewer right to where the action took place. The Germans did mount some counterattacks but only one, Operation Luttich which attacked in the area around Mortain was serious in its intent which is covered in this production. This film contains original archive footage interspersed with recreated scenes used re-enactment groups to show what it was like to be a German soldier in combat. Interviews with veterans, biographies of leading figures and the use of maps bring this history to life. The presenters discuss weapons, tactics and tanks and take the viewer off the usual paths visited by tourists and put the viewer on the ground. This is a concise telling of some of the fiercest fighting in a tough campaign.