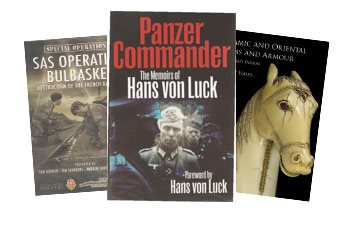 Most of us will never get the opportunity to look through the gun sight of either an M10 Tank Destroyer or a StuG III Assault Gun, but that does not prevent us from reading about how to use the gun sights or see the target like a gunner. This latest title from the ‘Versus’ series takes the reader on board each type of vehicle to further the experience which some readers may have seen in action at mobility displays such as the Tank Museum in Bovington in Dorset.

The full history and combat service of each these vehicles is covered and how their roles were eventually reversed on the battlefield is also detailed. As usual, modellers and war gamers will find the title useful for research. Vehicles owners take their original M10s to displays and recreated StuG IIIs are also used in battle re-enactment displays. This work will allow the owners to assess what each could do against the other in a real battle.

The shotgun has a surprisingly long history in military service being used in some fiercely-fought campaigns. It has been used by various armies over the years, but it has come to be seen as being a weapon which is quintessentially belonging to the US Army. It was they, after all, who used it in the defence of the Alamo in 1836, the American Civil War, the so-called ‘Indian Wars’ and even the Philippines. Shotguns really came to military prominence during WW I when it was used in trench warfare and again during WW II against the Japanese. Troops used it in the Korean War and Vietnam and more recently shotguns have been used in Iraq and Afghanistan. The author covers the long history in this work and describes the evolution from double-barrel to the semi-automatic types in current use and the future trends. The ammunition is also featured in detail and the reader may be surprised to learn that bayonets have been used on the weapon.

This is the second part of the documentary-style film which continues the story of the SAS conducted deep into German-occupied France. This film uses re-enactors to depict British and German troops to recreate events in locations where it actually happened and this helps emphasise the tenseness of the operation. The presenters, all experienced historians and battlefield tour guides, take the viewer to the locations and explain more about what occurred. Vehicles and weapons are explained and maps help show how the SAS were surrounded by the Germans and yet managed to avoid them. The difficulties are explained, such as air support, and how to blow up a railway track is described in detail! The drama, daring and reprisals are all covered to tell a full story.

ISLAMIC AND ORIENTAL ARMS AND ARMOUR

Robert Hales bought his first antique weapon in Kabul in 1966 at the age of 21, and has since travelled the Islamic and Oriental world, including the Far East where he began a love affair with Indonesia and for the kris (an asymmetrical dagger with a distinctive wavy blade).

This book is the first to document the range and breadth of this extraordinary field and is enthusiastically welcomed.  Donald J. LaRocca, Curator, Department of Arms and Armour at The Metropolitan Museum of Art, New York, said: “Every collector, dealer, and curator will want to have this book and will consult it again and again”.

The book is divided into four sections: daggers; swords; firearms; and armour, with the occasional transgression and a useful glossary of terms.  It contains weapons from a vast area and includes a wide range of styles.  Many were never used in anger but were primarily worn to show the wealth and status of the owner.  The skilled master craftsman from the court workshop, with access to the most expensive and precious materials, inevitably produced some of the most exquisite examples of Islamic and Oriental art.  Hales kept a photographic record of many of the weapons that passed through his hands, resulting in a rich and extensive archive.  As Thom Richardson, Royal Armouries’ Keeper of Armour and Oriental Collections, Leeds, says: “As a source of images of the finest Asian weapons, this book is unrivalled and will be an indispensable resource for anyone interested in the subject in the future”.

Unfortunately the author of this work died back in 1997, but if he were alive today he would be over 100 years old. There are veterans from WW II who are that age and older but few of them saw the amount of service seen by Hans von Luck whose memoirs are contained in this book. He joined the German army at a time when the size was limited by the Treaty of Versailles and during his training he was instructed by Captain Erwin Rommel and the paths of these two men were destined to be joined. The author saw service on all fronts being involved in the campaign into Poland, France in 1940 where he served with Rommel, North Africa, with Rommel again, and France in 1944, again with Rommel. In early 1945 he was fighting the Russians in Berlin. His survival in post-war captivity in Russia and return to Germany in 1950 is remarkable. This is a fascinating personal record detailing an incredible war service.

I AM SOLDIER OF FORTUNE: DANCING WITH DEVILS

Many people dream of a life filled with high adventure but few actually realise anything more exciting than planning a foreign holiday. The author of this book is one of those rare people who actually got up and did something about it and has lived his life to the full. After serving in the Vietnam War he embarked on founding Soldier of Fortune magazine, a publishing firm and still entering war zones around the world to report for the magazine he had established. There is little time for women in this book which is full of anecdotes fuelled by testosterone. At times it is hard to believe some of the incidents but it is more difficult to imagine that anyone could fabricate such stories. This is a book for men who like to read about real life rather than watch some fictional Hollywood actioner on the screen.