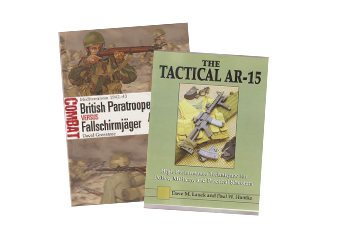 THE BOOK OF GUN TRIVIA

Thank goodness, at last! A sensible book from a sensible author which sets right the huge number of erroneous impressions surrounding firearms which have been created by Hollywood. The most obvious of these is holding a pistol sideways in modern films. Anyone familiar with handguns will know such a method serves no purpose and as the author points out is simply to look ‘cool’. He corrects a lot of falsehoods and myths in this compact title and his facts are like a book of records. If one were engaged in a specialist quiz on firearms this is a book to use to swat up on the subject. Little-known facts will impress shooting enthusiasts especially on the range of calibres ever used from the smallest 2.7mm ‘Kolibri’ to the largest which was 24mm calibre and used experimentally. This is guaranteed to produce a lot of conversation at your local gun club.

Shooting enthusiasts of a certain age will remember a time when handguns could be legally-owned in this country. They will also remember this as being the time when one could compete in a shooting application known as ‘Tactical Pistol’ to pit skills against other shooters. This book will take those enthusiasts on a nostalgic trip back to days gone by. It is nice to be reminded of these things and this book can be discussed at gun clubs and if anyone should be lucky enough to regularly shoot abroad, then this will allow one to keep in practice. We enjoy books like this because although we may never own the pistols again, like fast cars - which we may never get to drive - it is nice to read about them all the same.

The Germans revolutionised the use of tanks during WW II but the numbers they produced and put into the front line was but a fraction of that available to the Allies. The emphasis was on quality and new designs and these are the main reasons why interest in German armour of WW II remains so high. This film looks at all German armour but concentrates on two of the most important types of the war which, had they been built in greater numbers, could have prolonged the fighting and made things more difficult on the battlefield for the Allies on all fronts.

This is original archive material more than 70 years old which has been digitally remastered and although still grainy it makes interesting viewing. When viewed on a computer it looks good but on wide-screen TV it is better and the pause button will reveal much reference material for modellers. Those interested in German armour will enjoy seeing the tanks in action on all fronts.

This is the latest edition of a popular guide book which has been ‘revised and updated’ by the author to keep in line with current trends. Written in the first person singular fashion it is aimed primarily at American shooting enthusiasts, but British shooters will find a lot of useful tips in this title especially for the bolt-action weapons such as the Mauser types along with the traditional Lee-Enfield SMLE and the Soviet Mosin-Nagant. The book has a ‘disclaimer’ warning which points out that technical information reflects the author’s ‘…beliefs and experiences…’ which readers will not be able to duplicate exactly. Nevertheless, shooters will find the charts interesting and the results can be analysed in conversations. The one downside to the book is the inclusion of prices of things which does date such works. On the whole an enjoyable work from a knowledgeable shooting enthusiast.

THE FARMER’S WIFE; THE
LIFE AND WORK OF WOMEN
ON THE LAND.

Do not be put off this book by its title, because there is much of interest contained in this fascinating work. The author knows his subject and draws on his first-hand experience from time spent on a farm in Cornwall to tell the history of women working on the land from ancient times to 20th century. Women of all ages in particular will enjoy this work, especially those involved in re-enactment. The Women’s Land Army is popular and this book covers the period of WW I, and even earlier in telling the ordeal of women accompanying the pioneers in the American ‘Wild West’ coped with hardships. Incredible eye-witness accounts and superb illustrations make this history a great reference work.

Airborne forces are considered among the elite of any country’s fighting units and each country believes its own to be the best. German Fallschirmjager troops stunned the world when they seized the fortress at Eben Emael and led to the British raising their own Parachute Regiment. Comparisons are always a contentious issue and certainly war gamers invariably have trouble in deciding which is best. British and German Paras faced each other more times than believed and this book, the first in a new series called Combat, concentrates on their confrontation in the Mediterranean Campaign between 1942 and 1943, which makes a refreshing change from Arnhem. Weapons, training, equipment and morale are covered in turn before conclusions are reached. Re-enactors will enjoy this book and modellers and war gamers in turn will also find the subject most useful to their interests.

Semi-automatic weapons are not permitted in this country but that does not prevent us from reading about them. Likewise none of us are ever likely to find ourselves in the situations where the use of such weapons will be necessary. We are familiar with the images of weapons from newsreel footage and because of this it is nice to know a bit more about what we are seeing. This is another title aimed at the shooting enthusiast in America but shooters in this country will be interested in the subject all the same. The book covers every aspect associated with the use and handling of the weapon from safety to maintenance. The chapter on ballistics is fascinating and shooters in this country using the same calibres on man-op, straight-pulls or bolt-action rifles may be inclined to compare results achieved. The illustrations compliment the text very nicely and for the novice enthusiast shows in detail everything from sights to extractors.