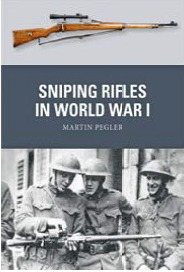 It is generally accepted that modern sniping, as we understand the term today, began during the American Civil War as the author explains in the introduction to this well-researched work before settling down to the subject. The First World War was when sniping became a science, with shooters being taught ballistics and how to understand weather which could affect performance. He examines each type of rifle in turn, from the Canadian Ross rifle to the Italian, French and British weapons and the American Springfield, all with sectionalised diagrams. He also examines the type of ammunition, giving some very good information on specifications and performance. He discusses training, tactics and how snipers were selected for this very personal task on the battlefield. The ruses used by both sides to entice a target to expose himself is a fascinating part of this work, which weapon collectors, shooters and general readership will find absorbing.

Sniping Rifles in World War I