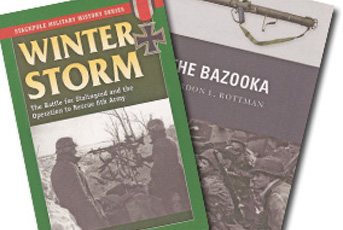 When the Soviet army accepted the German surrender at Stalingrad in February 1943 they had no idea the size of the force they had captured. The fighting had continued unabated and the once-great city was virtually destroyed but the Soviet army had held on tenaciously. The fighting cost the Germans 750,000 killed, wounded and missing. This is the story of some of those men told in their own words. It is a down to earth book full of brutality in battle but also lighter moments and always hardships. The book tells how the rescue mission to save the cut-off and surrounded German 6th Army was planned and cancelled. Well-read historians know the outcome, but this is still an interesting book all the same. In the end the Soviets retook the city and captured more than 91,000 German troops many of whom would never see Germany or their families ever again.

This is the 18th book in the Weapon Series and as with each title this work covers the ‘Development, Use and Impact’ the weapon had on warfare. What started out as the M1 2.36 inch rocket launcher was given the improbable title of ‘Bazooka’ a term which was applied to a range of similar weapons, but this is the original. Just when one thinks they have read everything on a weapon and know the history a title comes along which adds something new. This is one such book.

Most weapon enthusiasts will be familiar with the ground role of the Bazooka, but what they may not be aware of was that the weapon was also ‘navalised’ and the episode of Major Charles ‘Bazooka Charlie’ Carpenter, may be something new to readers. This work features all the types of ammunition, variants of the weapon and how it evolved and influenced other designs. The Bazooka was used in post war conflicts including Korea and Vietnam and was even highly regarded by guerrilla forces and the revolutionary leader Ernesto ‘Che’ Guevara and praised for the firepower it gave the foot soldier. The illustrations compliment the text and show the weapon in use in all theatres and roles.

LONGBOW; A SOCIAL AND MILITARY HISTORY.

There are few books on a particular subject which acquire a reputation that it becomes a ‘must have’ volume. This is one of those rare books and since its first publication in 1976 it has been reprinted five times and each time it reaches a new readership. Best known for his acting, Robert Hardy has a lifelong passion for longbows and archery which comes through in this solid work which examines the longbow in all its forms. The bow is to be found all over the world and has been used on the battlefield by many armies. Indeed the importance of its role during the Hundred Years War at the battles of Crecy, Poitiers and Agincourt added to its credentials and today archery is even included in the modern Olympic Games. This is an in-depth work containing the results of scientific experiments using longbows recovered from the Tudor warship the Mary Rose and other analyses of different woods for bows. The book is highly readable at all levels and will be absorbing for archers and those interested in the history of the longbow.

The sub-title to this DVD is ‘Blitzkrieg and the fall of France’ which allows the film’s producers to cover a wide spectrum when the tactics of the German military machine stunned the world. The Fallschirmjager (parachute troops) spearheaded the attack westwards in May 1940 with a daring coup de main by landing directly on the fortifications at Eben Emael using gliders. It was totally unexpected as it was audacious and an exploit which has been analysed by military planners historians world. This film has much archive film footage showing the German army in action using all the vehicles at its disposal at the time, and will be interest the vehicle owners. A bonus section includes images of the Ju52 transport aircraft and the DFS230 glider including a couple of images in a museum to give paint schemes.

The period of 1939 to 1941 is covered in this film and is a stage of the Second World War which modellers and war gamers alike find interesting because of the campaigns from Poland to the fall of France and the threat against England with Operation Sealion. This production is full of action sequences and includes colour imagery of vehicles in combat and troops along with shots of aircraft in flight. Some of the imagery will be familiar, such as the victory parade in Paris, but it serves to show how the German army relied on thousands of horses and bicycles which are often overlooked in favour of tanks and armoured cars, and this will give re-enactors some food for thought. The film shows trucks, artillery and troops on the march, again something which re-enactors will find very interesting. This is an all-round film for a wide range of interests in the early days of the war showing vehicles and just otherwise ordinary scenes which can be put to use in creating historic displays at shows.