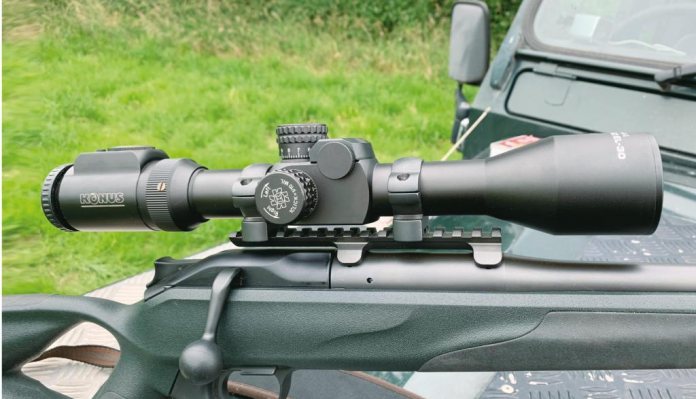 I’ll be honest with you, I’m not that much into what I consider gimmicky kit, as anything I buy has to wipe its face in one way or another. So, it was with some suspicion that I viewed the latest optical innovation from Konus. The brand is established and offers a range of cost effective and well-built optics that pretty much do what it says on the tin! As the years went by, the quality appeared to improve, as did the innovation, which is good.

However, the big buzz at IWA 2019 was the news that they had launched something rather special, the EL-30. This nomenclature hid something I have not seen before in a daylight scope, as it offered a series of interchangeable reticles, not like a digital NV sight, where you have to go back into the menu to select and insert it, but literally at the touch of a button, you could go from a simple cross hair to an all singing, dancing long range, bullet drop, windage compensating pattern. Clever, but was it just a crowd pleaser for those who did not really know what they wanted, or an alternative evolution?

To be brutally honest, I wasn’t enamoured of the idea. However, as I have learned in the past, to judge a book by its cover as a technical writer is not the smartest move. Some of you will love it; probably the airgunners more, whereas others will see it as the solution to the problem that does not exist. I will try to find the middle ground; as from my usage, it does have something to offer and, with a bit more thought, could become all things to all shooters.

The layout is conventional, with a one-piece, 30mm body tube and a fast-focus eyepiece, with the reticle controls at 12 O’clock on the bell. Most noticeable, is the large and rectangular saddle, forward right is the compartment for the single, 3 volt, CR2, Lithium cell. Turrets pull up to unlock and are graduated in 1/10th Milliradian click values. Given the magnification spec of 4-16x, I was surprised to see no parallax drum on the left side, or for that matter an adjustable objective ring up front.

With its 44mm objective bell, the EL-30 is a midweight design at 23.4oz and 13.1” long and presented no mounting issues on any of the guns I put it on, from PCP air rifles, rimfires and centrefires.

Of most interest, obviously, is the reticle package, as I have never seen a system like this offered on a day scope before. This is what Konus says: “The result of a decade long project of electronic engineering, this one-of-a-kind model is taking advantage of a patented LCD technology that will let you browse through 10, interchangeable reticles for long range shooting, intermediate use, tactical and hunting. This is therefore the most technologically advanced and the versatile scope in the market, a true quantum leap that is finally bringing the optical industry into the 21st Century.” Which is technically true, but your calibre choice will control these applications, as a long range reticle would be of little use on a 22 Rimfire hunter. Conversely, pick a 243 Win, with say an 80-grain load and you could hunt deer with the more basic pattern, then select a BDC-type for longer range foxing. Or, if using different sorts of ammo, use the turrets to set a number zero points and dial them in as to the reticle you need at the time.

The reticles are in the second focal plane (SFP) and electronically generated, so have no physical, fixed form, like a glass-etched system, for example. Operation and selection is simple; the rubber-covered button on the top left on the eyepiece bell is pressed to turn on and instantly the first pattern appears. The right hand allows you to toggle up through the 10 options, but annoyingly not go backwards; so, if you miss, you have to go around again. Turning off requires the left to be held for 5 seconds and the reticle disappears, but you can still see through the scope. Switch on again and it goes straight to your last choice. So, let’s see what you get.

Some of the rets work for me, others don’t; here’s what I didn’t like: M1 - no centre point or cross, M9 and M10 – too basic, but would be good for driven game on a compact, lower power scope, M4 works but is a bit busy and the circle on M6 and M7 makes the view a bit cluttered, but both are workable. In fact, most of the BDC/ballistic types are quite similar and, if I had to make the call, I’d go for M3 and M4. Annoyingly, there’s no standard cross hair, as all but one use a centre dot. Replacing some of these, I’d like to see a dedicated, ladder-type, BDC pattern in both 22 Long Rifle (sub-sonic) and 17HMR (17-grain V-MAX) rimfires cut for 200 yards. Although you could use M7 or M8 for that purpose, as they’re graduated from 0 – 10. Oh yes, and a good old fashioned German #4/4A.

First test was simple; would the reticles hold their zero when you switched from one to another and, yes they do, so no problems there! In use, they come up as more a dark grey than black, which is fine on lighter targets and open fields etc but offers little contrast on darker colours and in shadow and woodland. This is compounded by the fact that there’s no illumination on offer, which I guess is a symptom of the way it’s generated. I use this facility rarely, but in this case, a red dot in the middle would be a nice option for certain situations.

The lack of parallax is not so noticeable until you get towards 200 yards; my 4” steel gong was not looking as crisp as it did at 100. Further out, things were less precise. Looking at the build, I assume you can’t fit a drum to the saddle, but I see no reason why Konus could not have fitted something on the objective, as some of their KONUSPRO range already offer this facility and it would be a simple case of cherry picking.

Click values are 1/10th-Milradian (10mm @ 100m), but the drums are marked in 15 x 4 click increments, which makes little sense, as Mil turrets of this type are usually sub-dived into 1/10th for precise dialling. My guess is these are 1/4MOA drums on a Mil mechanical system. Each major division is worth 40mm x 15 = 600mm/23.6” per rotation. Elevation gives 3-full turns and windage 3.5, also the latter shows continuous 1 – 15 markings and is not split 1-7 either way, which would be more useful. Turrets can be set to zero, but instead of an Allen screw, Konus use a micro slot head and you’ll need a tiny screwdriver to suit. The magnification ring is grooved for grip and overly firm in operation, so a raised fin would have been a good idea.

With all these caveats, you’d think I don’t like the EL-30, but oddly enough, it started to grow on me. Things like the weird turret markings and the lack of parallax etc. are annoying, as are some of the reticle patterns. However, fitting it to my FX Wildcat PCP, Blaser R8 in 243 Win and 22 Magnum semi-auto rifle and shooting it under various conditions and ranges and selecting reticles to suit, to a degree proved the validity of the design. Plus, priced at around £360, it’s not that expensive for what it offers and, regardless of my thoughts, I reckon they will sell very well to a cross section of the shooting community.

It’s obvious to me that Konus has invested a good deal of time and money into the EL-30 and will not stop at this version. I have heard some other reviewers have come to the same conclusions as me, so if there is a Version 2.0 from the feedback they have doubtless received and if the have the sense to act on it, it could approach what they say about 1.0: “a true quantum leap that is finally bringing the optical industry into the 21st Century.” On the other hand, you might feel that what I have described is right up your street, regardless; if so, enjoy and buy in confidence.