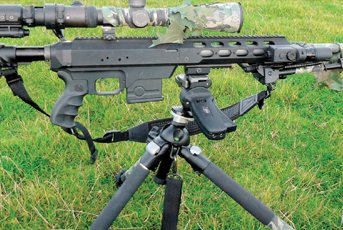 Although the now-common Picatinny rail mounting system makes it easy to switch your daytime optic for a dedicated night vision sight (NVS), the operation always raises concerns about zero shift. Even if you have tested for this on the range and experienced no problems, any remnant of doubt can affect subsequent trips into the field, especially if a shot misses its mark. With airguns and rimfires it’s no problem to check zero in the field, as suitable backstops are easy to find, ranges are short, shots are quiet, and ammo is cheap, but with a centrefire rifle this is a less satisfactory solution.

With my centrefires, therefore, I prefer to use a rear-mounted night-vision device (NVD) that allows me to leave my day scope in place and “convert” it into a night sight. Aside from avoiding the risk of losing zero, this approach has other advantages: for example, you can use the day scope with its greater magnification and more detailed image from daylight through into the dusk before fitting the NVD and carrying on into the dark.

You could do this with a dedicated set-up too, of course: but at the expense of greater bulk, and more fiddling about with mounting screws, whereas the NVD simply slips into the end of the standard day-scope adaptor (DSA), which can be left “in situ” throughout: a couple of turns of a thumbscrew and you’re all set.  Alternatively, a hinged adaptor (HDSA) is available, which allows the NVD to be attached in advance and simply swung 180 degrees out of the way when not required. Despite the ‘cool factor’ offered by hinged DSAs, however, I find the fixed type more practical, partly because I prefer to carry the NVD in my pack or pocket rather than on the rifle prior to use, and partly because when I’m not sighting through the scope with the NVD I like to use it as a handheld monocular, taking advantage of its wide field of view (FOV) to scan the ground.

Well, light transmission with an NVD attached to a day scope isn’t as efficient as it is in a dedicated NVS; the field of view is more restricted; and the reticle isn’t illuminated, as even if you have an illuminated reticle in your day scope, you can’t switch it on as doing so will damage the sensitive tube in the NVD.

Another thing to take into consideration with both NVS and NVD units, except front-mounted ones, is eye relief. A regular scope will be set up for day use so that the shooter’s eye rests naturally about 3” from the rear lens, achieving the correct eye-relief to obtain a perfect view through the scope. By contrast, NVD/NVS units have zero eye relief and require the shooter to bring their eye right up close to the rear lens, cushioning it with a rubber eye-cup.

This means that if the NVD is longer than the scope’s eye relief –and they all are- the shooter’s head position has to move aft by the same amount, which in turn requires a means of extending the length-of-pull, such as a slip-on butt pad, a length-adjustable butt plate, or an M4 carbine-style telescopic butt stock.

With NVS units the eye-relief issue is the inverse, with length-of-pull needing to be reduced in order to bring the shooter’s head comfortably up to the sight. NVS units tend to sit higher on their mounts than conventional scopes too, which requires the use of a comb-raiser or height-adjustable comb to achieve a cheek weld. Without one, you’ll tend to rest your head against the eyepiece, where any recoil will soon induce flinching.

On balance, therefore, I prefer a DSA, and have recently had the pleasure of testing the Cobra Optics Titan from Thomas Jacks. This is a beautifully handy unit, weighing comfortably under a pound and measuring just 127mm x 55mm x 66mm (5” x 2.2” x 2.6”). In practice, this means that it requires a head adjustment of just 6cm to the rear when compared to the day scope, which is easily made using a slip-on butt pad.

Despite its small size, the Titan is ruggedly built, with a tough alloy housing protecting the 43mm Russian-made Gen 2+ image-intensifier tube. At the front there’s a 27mm, non-magnifying lens, with a wide-aperture (f1.0), a 40-degree field-of-view, and a +/- 4 dioptre range, and the eyepiece offers a further +4/-6 dioptres.

The Titan’s small objective lens fit snugly within the diameter of the ocular lens of any day scope, which provides the required magnification, whilst the wide aperture and FOV make the most of the scope’s output, and the ample dioptre range ensure the scope’s reticle can be brought into focus.

Some fixed-focus scopes will work OK with an NVD, but for best results it’s important to use a scope with variable parallax, as this is the primary means of focussing the image for the NVD. As has been mentioned, illuminated reticles shouldn’t be activated, but the rheostat control itself, if built into the eye-bell, can also be a problem if it obstructs correct fitting of the DSA.

As for magnification, most of the time, anything above 6x will result in an unworkably degraded image, so a fixed-power scope of this or lower magnification, or a variable that starts below this figure is recommended.

My main foxing rifle is a Remington 700 in .204 Ruger. It wears an MDT TAC21 chassis that mounts an M4 buffer tube fitted with a Fab Defense GLR-16 butt stock: a set-up that provides instant, tool-free length-of-pull adjustment. On top, there’s a big Vortex Razor HD 5-20x50 scope (the rifle is also used for long-range daytime rabbiting). This has an illuminated reticle with a rheostat mounted on the eye bell, but it’s far enough forward so as not to obstruct the DSA.

The DSA itself comes with a set of 7 Spacer rings which ensure that it is compatible with eye bells in a variety of diameters. The spacer is inserted into the “fat” end and the DSA slipped onto the scope, pushed up flush against the eye bell, and locked in place by tightening the front (scope-side) thumb screw. As the rear of the DSA only protrudes 4cm, there’s still plenty of space between it and your eye and scant risk of being “scoped” if you shoot with it fitted.

With the Titan set up in its DSA, it’s time to turn our thoughts to illumination. All image intensifiers perform better when used in conjunction with an infra red (IR) light source, and this is particularly true of DSAs, which are dependent on the light-gathering ability of the day scope.

Like most NV units, the Titan does have a small LED illuminator built-in, but even though it offers two intensity levels, it’s still only a short-range proposition: useful if you’re fielding the Titan as a monocular goggle in conjunction with the optional head-mount, but otherwise redundant.

For longer-range use, therefore, something extra is required. In this case it’s a Pulsar L-808 IR Laser Flashlight. This features a Class 1 (eye-safe) laser – a unique feature at this price point - in a rugged polymer housing, with a focusable front lens so you can match the diameter of the beam to your scope’s FOV or narrow it to a tight spotlight for those moments when extra range or intensity is called for.

Usefully, the L-808 features a built-in Weaver mount. Ahead of the mount, however, Pulsar have moulded a vertical fin into the housing. Allegedly, this adds extra stability with their own rails, which have an open centre, but it means that the illuminator will only fit on the extreme front of standard rails. Of course, a minute’s work with a Dremel will solve this unexpected problem, but use the Dremel on the rail, not the fin, or you’ll void Pulsar’s warranty!

The L-808 also comes with a Picatinny-to-1/4”-Whitworth-screw adaptor that lets you mount it to anything with a camera tripod mount, but more useful would be an adaptor that fits the dovetails on the Titan. As it happened, I had a suitable adaptor in my spares box but you could also use a Cobra Optics 7712-2 IR Adaptor (which gives a 6x1mm thread), with a Laserluchs Weaver-to-6x1mm Screw Adaptor to the same, or better, effect, since Thomas Jack’s Ashley Beard explains: “this also steps the laser out somewhat so there is less chance of a turret etc. getting in the way.”

On top of the L-808’s housing is a rubberised power button and a dial that controls the intensity of the beam, while at the rear, a tiny green LED indicator helpfully shows the laser’s status, and a battery cover, handily marked with the required polarities, provides easy access to the power source: a pair of readily-available AA cells.

Conveniently, the Titan uses the same battery type, although remarkably it runs off a single AA cell, drawing power so efficiently that it will last for up to 25 hours (less if the on-board illuminator is used).

The laser delivers an even beam that is easily regulated, and by loosening the knurled metal locking ring just behind the focusable front lens you can fine tune the laser’s alignment to the centre of the field-of-view (tightening afterwards to lock it in place).

As for the Titan NVD, its Gen 2+ tube produces exceptional results, with the image showing good contrast, a smooth tonal gradient, very little noise and no discernible distortion. When used as a handheld monocular for scanning the ground, the wide-angle lens gave a wonderfully comprehensive picture of the terrain, and when mounted on the Vortex scope it was possible to go right up to 8x and still get an image of a rabbit at 200 yards with enough definition for a head shot.

In conclusion, the Cobra Optics Titan scores highly in all areas and represents a capable and versatile tool for the night hunter, especially when teamed up with Cobra’s Day Scope Adaptor and Pulsar’s L-808 laser. The bottom line? This is a great NV package at a great price – so good, in fact, that I bought one myself!