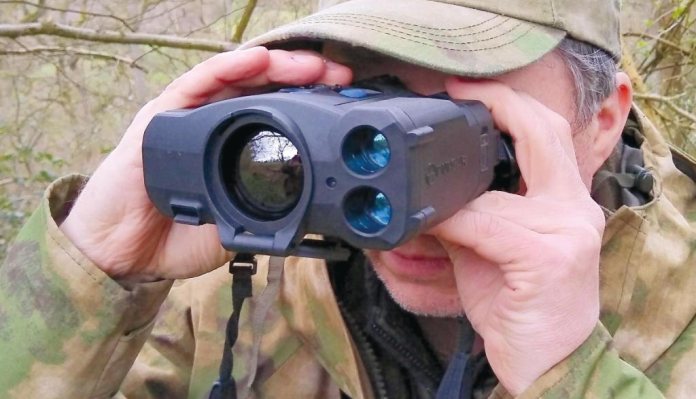 Some reviews are hard to write because a product’s virtues are too easily eclipsed by its faults. Trying to be honest about the latter whilst doing justice to the former and keeping everything in balance is hard. This isn’t one of those reviews. This one is hard to write because absolutely the only thing not to like about the Accolade 2 LRF Pro (or at least the only thing stopping me from buying one) is the number fourthousand- six-hundred-and-fifty, which, minus a shilling, is what it says on the price tag. That means I’m about to spend the rest of this review listing all the things I like about a product that I, and maybe you, can’t afford. Nevertheless, if you can afford one, or you can almost afford one, or you just like to see what the leading edge of consumer thermal looks like: read on!

The Accolade series joined Pulsar’s line-up in 2018. A joy to use even then, in the intervening years it has acquired a built-in laser rangefinder that’s accurate to +/-1m out to 1 kilometre, gained a 640x480 AMOLED display and had its NETD value refined first to >40 mK in the Series 2 version. This has now been further reduced to an unprecedented >25mK in the ‘Pro’ variant (on test). Along the way, Pulsar has refined their imaging algorithm and introduced the Image Detail Boost function that maximises the information available from their evermore- precise thermal sensors. As upgrade curves go, this is pretty phenomenal, yet today’s top-end Accolade actually costs less than the original did in 2018.

But let’s get back to basics. What makes the Accolade different in the first place is that it isn’t a monocular (one objective lens, one sensor and one near-eye display) or a binocular (two of each), but a bi-ocular, in which the information from a single lens and sensor is sent to a pair of displays, one for each eye.

True thermal binoculars do exist, but because the most expensive component of a serious thermal device is always its germanium objective lens, and because microbolometers (thermal sensors) aren’t cheap either, doubling up on these sends the pricing through the roof. In addition to providing three-dimensionality to the scene being viewed (something a bi-ocular can’t do), by providing the vision centre of the brain with a pair of complementary images – exactly the kind of input our brains have evolved to process- both binoculars and bi-oculars facilitate perception and prolonged observation. Given that the dual-input thing is more important than depth-perception (especially when viewing objects that are well out of arm’s reach), a bi-ocular design is a great way to obtain the principal benefit of binocular vision at a fraction of the cost of a true binocular.

There are some potential ergonomic advantages, too. For most of us, using a pair of conventional binoculars is second nature, so the Accolade feels perfectly at home, whether resting flat against your chest, tucked inside a smock, secured by a bino-harness, or cupped between your hands to scan the ground ahead. That two-handed hold is at once secure and stable, as the symmetrical eye-cups brace comfortably and naturally against the symmetrical structure of your face, and your elbows rest evenly on your chest or knees, or the rail of your high seat. Of course, if you want to, you can use the Accolade like a monocular, rolling it from eye to eye and passing it from hand to hand to scan the landscape as rapidly as possible with minimal head movement, but once you have a target in view, the bi-ocular format comes into its own, both physically and visually.

In pictures, the Accolade somehow looks bulky, but in real life, it surprises by its compactness and light weight. It’s well balanced too, front-to-back and side-toside, plus the contours of the rangefinder housing on the left have been neatly matched to those of the B-Pack IPS7 on the right. The release lever for the battery pack is nicely tucked away underneath, but with just enough of its tip clear to be easily operated when desired.

Excellent too are the eye-pieces. As well as being independently focusable across +/-5 dioptres (perfect for those of us with mismatched vision), their spacing can be adjusted to match the distance between the user’s eyes. Known as the interpupillary distance, this varies from person to person, and setting it correctly is crucial to getting the most out of any binocular or bi-ocular device. On conventional binoculars, the distance is set by pivoting the barrels on a central hinge. The solid body of the Accolade prevents this, so instead, you simply slide the eyepieces towards or away from each other until your eyes line up naturally with their respective screens.

The eyepieces are fitted with rubber cushions that incorporate a half-moon flange that follows the outer contour of your eye sockets. This reduces light leakage from the screen for stealthier use at night and cuts out back-reflection in daylight use.

Lens covers are often a weak point with optical products, and especially with thermal ones. In the field, too many prove insecure, fragile or easily lost. They need to be securely tethered, to remain out of the way when open, and to stay shut when closed. The Accolade’s lens cover ticks all three boxes: it’s retained, pivoting smoothly but stiffly around a hinge; clicks securely shut when closed, and lies flat against the underside of the device when open.

Pulsar got the ergonomics of the control pad on top of the unit right, too. In place of the linear array familiar from the Axion, Helion and Trail series, the Accolade’s buttons are arranged in a cross-shape, with the menu button in the middle, power on the left, record/pause on the right, up/ranging/palettes nearest the eye-pieces and down/zoom/modes nearest the objective lens. This means that the calibration and stand-by, plus still/video capture functions, fall naturally under your left and right index fingers. A little extra finger extension and you’re into menu/up/ down territory, and able to cover the menu button with one index finger and swap between the navigation buttons with the other. Or you can be a smarty-pants and use more fingers! Whatever way you do it, it’s quick, easy, and soon becomes second nature.

I have to make a confession here. I never use more than the base magnification on a spotter. (It’s different with a weapon sight.) I understand why manufacturers provide a digital zoom: because they can, customers want it and it looks good on the spec sheet, but I never feel it provides me with any extra information, especially when the display is a good one. For the same reason, I never have any use for the PiP function. Consequently, I curse every time I accidentally hit the zoom button and have to scroll through x5, x10, x15 and x20 just to get back home to x2.5. So, please, Pulsar, put an option in the menu to turn off the zoom. I don’t care how deep you bury it in the menu tree, I’m only going to use it once.

I’ve no complaints about the rangefinder, though. Push once to activate it, again for a reading, and push-and-hold to enter scan mode. Both the readout and the reticle (a pair of neat white brackets) are clear and the beam is well centred within them. I didn’t manage a 1K reading due to terrain limitations but was able to ping sheep and foxes at ranges of 700m and more without difficulty.

Of course, what ultimately counts is the image. With the Accolade 2 Pro’s specification and its price tag, you’d expect it to be good. It doesn’t disappoint. In fact, I kept passing it to my shooting buddy while saying “You’ve got to see this. It’s amazing!” The <25mK NETD 640x480 17μm microbolometer coupled with Pulsar’s image-processing algorithm and topped off with their Image Detail Boost function combine to deliver the most detailed, realistic and immersive thermal image I’ve seen. The unit has the power to render the texture of bark, the barbs on wire, the fine twigs that would otherwise have gone unseen, and an unprecedented ability to pick up strong heat sources through the tiniest gaps in the undergrowth that literally lets you detect presences to which other devices are oblivious. Add to this the fact that having two eyes on the target all the time lets you take in more information with less fatigue and you understand why this device so quickly comes to feel like an essential extension to your natural senses. Time to ask the editor for a raise, I think!