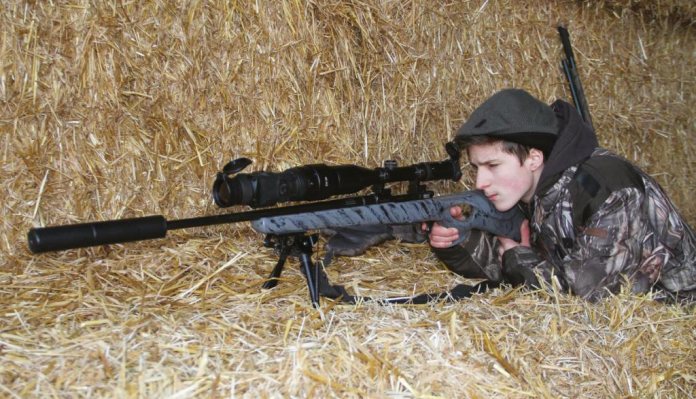 There is no doubt that thermal optics, be they scopes or monoculars, are here to stay! The advent of cheaper digital technology has shown a massive reduction in costs, yet better and more readily available high quality products and performance. I like my Night Vision (NV) optics as a single standalone unit, like a telescopic rifle sight. However, there are some very good arguments for having a thermal device that converts from a hand-held observation tool to that of a weapon-mounted unit.

One such is Pulsar’s FXD50 Core, as like their hand-held XQ38 and 50 models, offers good quality observation and detection range. Priced at £3,995.95, you get a very good thermal system that is excellent for quarry detection, with its distinctive green OLED sapphire display.

The Core FXD50 is a front-mounted system and as such attaches to the objective lens of your day sight by an adaptor. So, you can use one scope day or night, by the simple expedient of clamping it to the objective when required or removing it for hand-held use! The first thing you notice is its unusual green sapphire OLED screen. Most thermals give a black/white image. I liked it, as it gave an unusually clear, defined image, with the hot areas of the target shining white. Its 640x480 pixel display is very good with fast eye focus and front mounted objective focus with raised lever for easy use at night!

You have a 384x288 sensor with a 25um pixel pitch and high 50 Hz refresh rate that means a detailed image that does not blur as you move the Core in observation. The 50mm f1.2 Germanium lens gives a 2.8 x magnification and is able to detect a human up to 1200 metres. There is a 2x digital zoom but only as a hand held unit. It is powered by two CR123A batteries with a longer life than expected that operate in -25 to + 50° C and is IPX7 rated, so highly weatherproof and this backed up with a 3-year warranty. Operating controls are easy to use and mounted to the top cover. They include three calibration modes, rocks, forest and recognition. This is used for a better image for Rocks being an enhanced contrast feature, the forest gives better low contrast control, whilst the recognition gives an improved image rendering.

You have four buttons for ON/OFF, left and right navigation and can be used to increase or decrease the brightness or contrast of the image. With the left being also used for colour inversion i.e. white hot or black hot. There are also three calibration modes of manual, semi or full automatic that helps to keep a peak image under differing conditions. You also have a remote control unit but I did not use this.

The eyepiece section is easily removed via a rotating rubber slip ring that detaches the bayonet-type fixture. Now the OLED screen is exposed and so another fixture is attached that allows the rear section to couple to the day sight. This attachment is available for £99.99 as an option and is available in 42m, 50 and 56mm objective lenses, with varying inner collars to get a precise fit from the lever clamping system.

Because this is a front-mounted system, it does not affect the original zero of the rifle, but you must get the CORE/objective connection/relationship correct. There are actually three junction points to look at. Firstly, the inner ring that slips into the objective lens attachment. This must be a firm fit to the objective lens, as well as the coupling unit. It is rated to heavy recoil but being plastic has a tendency to slip within the coupler. Under recoil the gun goes back and scope goes forward and so the coupler and inner ring want to part company however tight the are! A bit of Duck tape and it’s solved and gives a solid central hold to the scope.

Next is the coupler between the Core and objective lens coupler. The scope end has a bayonet union, with a slide forward button to release. It is very tight and all the better for it. Ahead of this and at the Core end is another bayonet fitment but attaches via a rotating clamp. This is the essential union, as it is a dedicated match for each Core. It must be inserted and rotated fully, it is easy to partially attach or tighten and this results in a semi loose fit that will affect zero. Check these areas and you will be fine!

Because the sight places the scope’s reticle on the OLED screen, the magnification you choose will determine the image quality to some extent. I used a Schmidt & Bender 3-12 sniper scope and found that at 4x power the image was superb and you could see the edges of the OLED screen. Zoom in and the image enlarges, but you also lose the OLED screen edge a bit as you are essentially magnifying the pixels, so there comes a point when too much mag is, well, too much. On the Schmidt 7 to 8 power was the maximum I could work with and for foxes below 100 yards 4x power proved ideal. Also, if the Core is fitted wonky as the screen will look lop sided but is easily corrected.

I was using my Tikka .308 Win loaded with the older 110-grain Berger Varmint bullets that were phenomenally accurate and great for transforming the old girl into a competent fox rifle from its deer duties; even in this overly heavy calibre for foxing.

I zero the rifle 1” high at 100 yards and after fitting the Core I did have 1.5” deviation and that’s when I discovered the loose fitments described. My Duck tape remedy got that down to less than an inch variation, but you must remember you are aiming at pixels! So in reality very good performance, as the weight, although light at just over a pound with batteries fitted, does flex the scope more and alter harmonics, so that deviation is less than an ill fitted bipod or hand grasping the barrel under recoil.

Sensitivity was really good and I loved the green sapphire display, as it looked vivid and gave good contrast between the reticle and image. Hand-held, my son Jake and I searched the farm and fields on a weekend when the temperature was -5° C. In these conditions, thermals really work well, as very small temperature difference is observed. You could see heat from rat holes in the straw emanating from the barn, owls in owl boxes, deer bedded in the woods at 500 yards plus, rabbits scurrying around and the image was sharp and detailed

We spotted several foxes across the fields walking away but because we were undetected, we decided to set up in one of the barns and ambush them on their return, plus it was warmer! Set up on the bipod, the Core attached to the Tikka provided a superbly detailed view right across the field to 300 yards.

Start up is slow on this model, when compared to the Pulsar XQ38 or 50, so we kept the Core on because as we all know; foxes just appear from nowhere when least expected! It worked as a big Vixen came trotting along a track and you could see her heat signature through the trees at 150 yards and she was easily identified by her gait and size. However, range is hard to determine with any thermal or NV kit, so it’s best to keep it sensible.

She disappeared out of sight but there was only one place she could emerge, so we focused on that spot at 80-90 yards away and when she refused to stop I whistled and the 110 grain Berger was sent on its way, for a one shot humane kill. We had another two foxes and saw so much wildlife going about it business undisturbed by the Core, as to be really educational and a great insight for the next visit.

Hard not to be impressed! This Pulsar Core FXD50 gives you the best of both worlds, observation, day and night with the ability to instantly fit it to your optic to make it a thermal rifle scope. Take the time to assemble correctly and securely and practice at known ranges and you will not be disappointed. The price is actually very good for this level of clarity, sensitivity and detection and the battery life is good too, what more do you want?