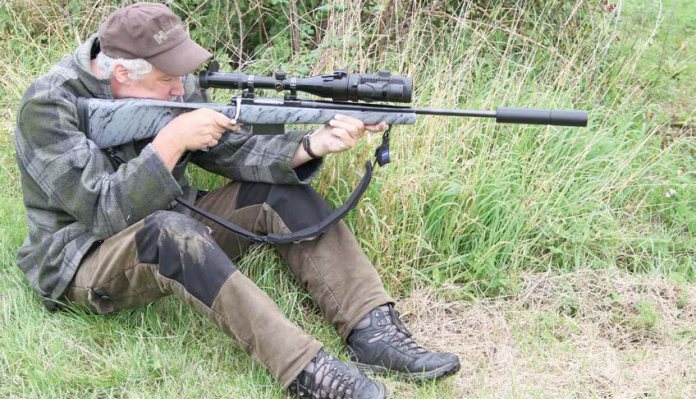 Pulsar, distributed by Thomas Jacks Ltd. are regarded as the new innovators of Night vison (NV) and thermal imaging equipment offering some superb models at now realistic prices from their ever-changing range of models. You have always had the dilemma with NV equipment; as you can go either for a dedicated weapons sight that replaces your day scope, or have an add-on that fits to the front or rear of your day scope.

Financially and practically, both have their plus and minus points. Often, a dedicated NV scope will not offer the image quality of a standard glass unit, rear-mounted add-ons will cause eye relief problems causing you to push the scope forward to accommodate a practical head position. So, unless you want a dedicated NV rifle, which has no other use, a front-mounted unit solves a lot of problems!

Front mounted NV is the easiest to use, as you keep your natural eye relief and adding a NV kit to the front of the scope helps stop problems with parallax error and point of impact zero change. Pulsar has introduced their new Forward F155; as its name suggests is a standalone NV device that attaches to the front (objective lens) body of your existing scope. This all-in-one unit costs less than a grand, at £989.95

You have two models to choose from at present, the F135 or F155 with the same footprint but differing in range detection, field of view and magnification ability. I had the latter that is suggested to be preferable for day scopes with 4x to 8x magnification range, which is more like what most hunters will use. It’s a compact unit measuring only 6.1x3.6x3” and weighing 19 ozs without the battery pack and rated recoil-safe up to .375 H&H, which is quite a thumper.

It really is a neat little unit and due to its light weight does not stress the scope’s objective lens. Saying that, the Jaeger range of scopes from Yukon are reinforced in this area, just for this purpose. The F155 uses a four-point clamping system that has a bayonet fitment that is available in the scope’s size that you are using. I had the 50mm and 56mm attachment that comes with differing plastic inserts that perfectly cushions the clamp to your scope. This ensures a direct and positive fitment, so no zero shift.

One thing; the bayonet attachment is very tight and needs a bit of lube and wearing in to keep it workable. All the controls are easy to understand and are digital menu lead. You have a 1x power mag and a relative aperture of 1:1 with a field of view at 100m of 8.4m. The F155 has a detectable range of a 1.7m tall target of 490m, whilst the smaller F135 reduces this to 405m, in truth good enough in each case!

Resolution-wise, the device is impressive with a CMOS sensor type, with pixel resolution of 702x526 pixels and a display of AMOLED type with a 640x480 resolution. You are also safe from the elements, with a IPX7 water proof rating and capability of operation from -12 to +122°.

The F155 uses the new Li-ion battery system, so much better than the older type, now you have a compact unit that lasts hours and you also have an external power source of 5V from the USB connection. Rated at 9 hours use, I can attest to that; charge up and forget all night, perfect.

You also have an onboard video recorder that has an avi/jpg format of 640x480 resolution and a still image res of 1280x960 pixel. This is stored on a 16Gb internal memory, so you have 300 minutes for video or 20,000 pictures, more than enough for your internet junkies. There’s also a Wi-Fi channel, capable of streaming images to a device, so long as it is no more than 15m range.

Once fitted to the scope, remove the front lens cover, which is a fiddle to be honest, and then switch on the F155 with the front button from the quartet on the top of the unit. There are only four, so it’s easy!

Front is ON and OFF, it takes a while to come on, about five seconds and then the TV, or AMOLED screen, is visible through your scope. The size of the screen is dependent on the mag you are using, as a 2.5-4x power means you see the screen and space around it, whilst 5x and above you just see the screen and increasing pixel size as your scope mag increase. That is why this model is rated for 4-8x power.

I fitted it to a 6x56mm Nikko on a Browning A-Bolt rimfire that gave a full screen view and minimal pixel enlargement. Also, on a Schmidt and Bender 3-12x50mm sniper scope on a .308 Win that was best on 6x power before the image becomes too pixilated to be useful. Once on, you can focus very easily with the large top mounted knurled knob and then set up the brightness and contrast with the Hot menu.

This is accessed by a short press from the rearmost button for brightness and then this is increased or decreased via the remaining two buttons, left and right. Contrast is via the same system of scrolling through the menu. To enter the main menu, hold down the front button and then toggle through the menu with the left and right buttons.

With sub menus being entered with a short press of the front button, the digital age and younger users will have no problems with this method. There are so many options for Wi-Fi settings, photo resolution, virtual reticules and recordings there is not enough space here to describe them all but the handbook has 28 pages dedicated to these functions!

As with all digital units, they are safe to use in the daytime too, so makes sighting in a breeze. In that I mean no sight in needed but it is always best to check the zero has not changed. I fitted it to the Browning rimfire and found at 50 yards I had less than a ¼” deviation of the point of aim but you need the bayonet clamp tight to return to the same position. On the .308 Tikka at 100 yards no more than ½” of shift and that’s a practical or safe range anyway, although a shot at 200 under ideal conditions could be taken with practice.

Although the device is capable of detection of a fox at 300 yards+ a shot at that range would not be sensible. Firstly, at that distance, the target is small and dependant on magnification used from the host scope, the image pixilation will cause an error. I found the image quality from the AMOLED display was good up to 6x mag on the scopes used and after that the image pixelates too much; useable but not great. The scope’s reticule is visible, as it appears superimposed on the TV screen and I had no problems in focusing at any range!

Battery life is superb and to be honest you do not really need a spare. I stuck with the Li-ion battery supplied, as once charged, it lasts all night despite me fiddling with controls, adjusting contrast, sum light and taking images- impressive. Long term power has always the bug-bare of NV in the past, but not now!

Finally, all digital kit has a performance boost from an external power source and the F155 comes with a detachable IR illuminator. It has a 940nm wavelength for extend use in total darkness and is non-visible. A simple push button at the rear of the device switches on and then subsequent pushes increases or decreases the power setting. Trouble is, there is no visible light to see if it is on, so you need to look through the F155 to see if you have turned it off. There is a width beam adjustment to the front and a quick detachable attachment for another IR illuminator if you desire.

For the price and ease of use with your normal day scope and not having to have a dedicated NV rifle setup, the F155 Forward mounted system offers a good degree of flexibility.

Aside from the very stiff bayonet fixture, I was impressed with the degree of clarity and detection range of the F155. You have a crisp image but only if you are sensible with the magnification of the host scope, 6x max in my view. The battery life is superb and all the functions will please the techno nerds and Youtubers.

For under a grand, it solves the problem of that initial investment, as with differing clamps you can fit it to any of your scopes, transforming them into a very effective Night hunter.