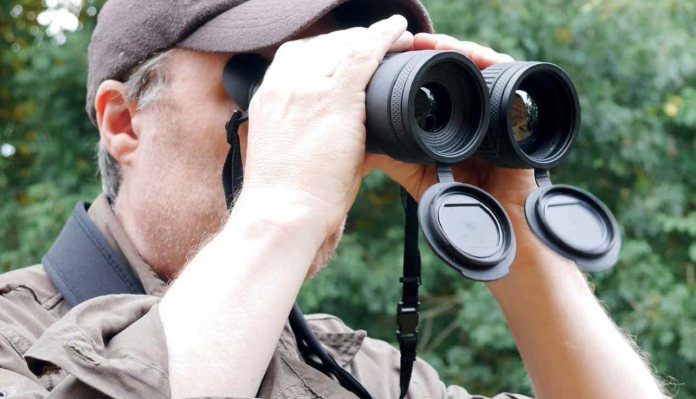 Every so often a product is launched that sets a new benchmark for its class. In no field is this more true than with electro-optics, where developers of products for shooters can tap into the new technologies constantly emerging from a far-larger industrial sector. Nevertheless, there’s one shooting-oriented electro-optics company that shows more dynamism and creativity in product development than any other, and that’s Pulsar. So, when they bring out a new flagship product, it tends to make everything else look old!

This is assuredly the case with Pulsar’s new Merger bi-ocular (one objective lens, two displays), which replaces their Accolade 2 LRF XP50 Pro model. Given that the Accolade is itself a seriouslyimpressive piece of kit, discontinuing it speaks volumes about Pulsar’s confidence in its replacement. Is that confidence justified? Let’s just say that I’m expecting there to be plenty of good deals on second-hand Accolades as lots of existing users trade up!

Two are better than one

If you’re unfamiliar with the Accolade, it’s a thermal camera that relays the output from a single 640x480 thermal sensor to twin displays, allowing the user to view the scene with both eyes (hence ‘bi-ocular’) simultaneously. The primary advantage is reduced fatigue, but there’s also an enhanced sense of immersion in the scene, since - having evolved this way - the brain responds more readily to matched input from both eyes. I’ve used the Accolade and Merger enough to know this isn’t just hype and the bi-ocular format genuinely makes extended viewing more pleasant, and this in turn keeps you alert and observant for longer.

Over its lifetime, the Accolade acquired some internal hardware and firmware upgrades, along with a built-in laser rangefinder, while the form factor remained essentially the same, bearing a family resemblance to the somewhat-boxy Helion/Trail generation of thermal monoculars and riflescopes. As these were replaced by the smaller and sleeker Axions and Thermions, the Accolade’s days were evidently numbered, and anticipation grew that its replacement would follow the direction Pulsar took with the Thermion, emulating the looks of its conventional optical counterpart.

Consequently, the new Merger sports a pair of round barrels positioned on either side of a cylindrical central bridge, looking to the casual observer like a pair of high-end roof-prism binoculars. Close examination, however, reveals that all is not as it seems. To begin with, the lenses in each barrel are different sizes, because the left barrel contains the 50mm germanium-glass lens for the associated 640x480, 17 μm thermal sensor. The right one is occupied by the laser rangefinder, with its smaller optical lens and neatlyinset laser emitter. External symmetry is maintained, however, as both barrels have identical diameters, matching rubberised semi-rigid lens covers, plus polymer panels for increased grip and coldweather comfort.

The shape of the central bridge between the barrels is also deceptive since it neither hinges nor mounts a focussing wheel. Instead, the thermal lens is focused via a ridged, rubberised ring on its barrel, and adjustment for interpupillary distance (the spacing between your eyes, which varies from person to person and is the reason most binoculars are hinged) is made by sliding the eye-pieces horizontally. Naturally, each eyepiece is also individuallyfocusable, so as to make the most of the Merger’s twin 1024x768 AMOLED HD displays.

It’s all in the details

The bridge itself houses a removable, rechargeable APS3 3.2AH battery pack, which slides in from the rear, and is removed with a firm press of a discreet button at the front. A white dot aids orientation in well-lit conditions, while ridge-and-groove contouring does the same in the dark. A further 4Ah battery is built into the right barrel of the Merger, giving a combined run-time of around 10 hours. This can be supplemented by connecting an external power bank via the USB-C port tucked under a rubber cover on the underside of the unit. The move to a dual-battery system won’t be welcomed by all, especially as it offers only a modest run-time advantage over the Accolade’s removable IPS7 power pack (and none, if you fitted a high-capacity IPS14), but it clearly represents intelligent use of space within the new body shell.

This is constructed from magnesium alloy instead of the glass-nylon composite characteristic of the Accolade/Helion/Trail series. Using this super-lightweight alloy ensures that, although the Merger is 32mm longer, 13mm wider and 12mm thicker than the Accolade, it only weighs 100-grams more than its predecessor. That said, the new materials, dimensions and heft give the Merger a ‘presence’, which - along with its impressive performance - makes you feel you are carrying a serious tool into the field.

Underneath, the twin-barrel format creates a comfortable thumb channel, but this also means an adapter is required to connect the tripod socket within it to a standard tripod plate. Fortunately, this adapter is supplied with the Merger. Mounting the Merger on a tripod and viewing the output on a smartphone or tablet via Pulsar’s Stream Vision 2 app is a great way to carry out sustained observation in comfort, and get steady video into the bargain. Hopefully, Pulsar will soon make good on its promise to restore automatic movement alerts to the app’s functions as a further aid in reducing fatigue.

The Merger’s bilateral design also called for a new control layout. Consequently, the Accolade’s centrallypositioned cruciform arrangement is replaced by 3 buttons on each barrel. From farthest to nearest, the buttons are POWER, CAMERA and RANGING on the right, and PLUS, MINUS and MENU on the left. The MENU and RANGING buttons are larger and slightly offset, whilst the others are paired and situated within an oval recess, making finding the right button at the right time super-easy.

Control functions will be largely familiar to existing Pulsar users. POWER shows a fast start-up time of just 5 seconds and incorporates a batterysaving standby mode that deactivates the display. CAMERA lets you choose between recording stills or video, and includes a useful ‘pause video’ function that lets you capture just the bits you want when observing your quarry, without creating multiple files. Recording quality is up, too, with files saved at 1024x768 and in .mp4/. jpg formats (vs. the Accolade’s 640x480 and .avi video). RANGING, meanwhile, reaches out to 1,000m, and includes a ‘scan’ function for pinging moving targets and those in difficult terrain. A choice of reticles is available in the menu, too.

All of the Merger’s other functions are accessed via the left-side buttons. After entering the menu with a long press, you can use the PLUS/MINUS buttons to scroll, and MENU again to select an option. My most-frequent menu adjustment is the colour mode. There are 8 to choose from (white-hot, black-hot, red-hot, redmonochrome, rainbow, ultramarine, violet and sepia). White-hot is present by default, while any of the others can be selected as a quick-access option, available via a long press on the MINUS button when out of Menu mode.

Also useful is a new ‘smoothing filter’ menu item that lets you set the algorithm to give you either a sharp or smooth image. Users will have their own preferences. I liked ‘smooth’ for general observation, and switched to ‘sharp’ to get the maximum detail out of a specific target.

A ‘quick menu’ is accessible via a short press on the MENU button. This lets you increase/decrease brightness, contrast and zoom (the latter in 0.1X increments). As we have seen, the remaining left-side buttons also have quick-access functions. Specifically, pressing the MINUS button lets you scroll through three new ‘amplification level’ presets. Dubbed ‘normal’, ‘high’ and ‘ultra’, these replace the old ‘observation modes’ (Forest, Rocks and Identification). This isn’t just a renaming exercise, as the new modes have been carefully calibrated by Pulsar’s R&D team to optimise performance under adverse atmospheric conditions, making the Merger able to tackle fog, rain and snow better than its predecessors.

As for the PLUS button, short presses will scroll through the zoom levels (2.5x, 5x, 10, 20x), while a long press activates the picture-in-picture window, within which subsequent short presses allow you to zoom in or out. I’m sceptical about the value of digital zoom, and always prefer to run thermals at their native optical magnification, as this gives the widest field-of-view and the least-pixellated image possible, but there are times when stepping up a level gives you a bit more useful information.

It will be no surprise to hear that I absolutely loved using the Merger in the field. Its clarity, detail, ergonomics and general ease of use were impeccable, and the 1024x768 video was a real treat, providing a vivid record of some great wildlife encounters. The Accolade’s only advantage over the Merger, its somewhat lesser size and weight, is more than compensated for by the Merger’s upgraded displays and image processing, and by its fresh new layout and looks. The fact that Pulsar has brought the Merger in at the same price (£4,649.95) as the outgoing Accolade is impressive too. Plus, you still have the same solid 3-year warranty and the support of longstanding UK distributors, Thomas Jacks.