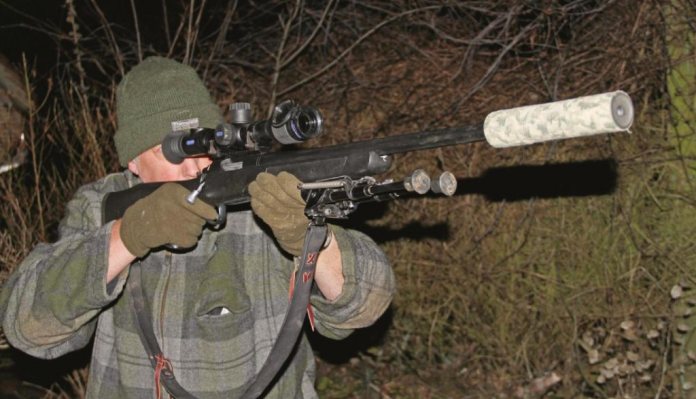 The Thermions look like a normal rifle scope and that is part of their appeal, as they are familiar to operate and, more importantly, easy to mount up using conventional scope rings. Available in four models at present and I have tested three of them now and they are spilt between the XM and XP versions. The primary differences are in the size of thermal sensor they use. The XMs have a 320x240 12 micron unit, whilst the XPs use a 640x480 17 micron, both use a 1024x768 AMOLED full colour screen for viewing. Priced at £2979.95 this is like a high-end European scope but offers significant advances, day or night, read on.

Take the Thermion out of the box and you would be hard pushed to differentiate this from a normal day scope. You have dimensions of 394x78x64mm with a weight of only 0.75kg and traditional objective lens, eyepiece arrangement on a 30mm aluminium body tube for standard scope mounts and what look to be regular turrets.

With a 30mm body tube with 65mm forward and to the rear of the central turrets allows a good degree of flexibility for mounting to any type of rifle and action length. The XM38 is your entry level model, but don`t be put off by that, it’s a really capable and, in some ways, better thermal sight. The objective lens is 38mm diameter with the rubberised focus ring, so it can still be mounted low to the action, as most shooters prefer.

The eyepiece is a fast focus type adjustment, to give a sharp image of the AMOLED screen and an accessory rubber gator is supplied. I would fit it, as in daylight it allows you to see the screen better and at night stops the shine reflecting off your face. Overall finish is a tough anodised black and feels very good quality. The central saddle houses the batteries and side operated menu system, not elevation or side focus as would be on a normal scope.

The top turret cap is removed to reveal an APS2 battery and what would be a windage drum is where you plug in your USB cable to charge the onboard battery, followed by the removable APS2 or larger APS3 cells if required. The normal on-board unit lasts about 3-4 hours dependent on usage and temperature, the removable battery doubles the run time.

To the left side is the main menu button and adjustment/navigation ring as this is menu-lead. The other controls are mounted on the eye piece in a raised low turret and has a rear blue button, which is the ON/OFF. The XM38 switches ON almost instantly and a longer, 3-second press turns it off and a ‘Display Off’ facility too for instant star up again when dormant.

In front and to the left is the zoom button and to the right is the record, for pictures or video, which has a photo/video resolution of 1024x768 pixels with a built-in memory of 16 GB. You can choose various colour palettes, which can be useful in some situations. The AMOLED screen is colour, but in thermal black or white hot it appears monochrome. It shows details of battery charge status for both cells, time, magnification, manual or auto calibration, detection type, zero range setting and in the top left whether you are in pic. or video capture. You also have a horizontal level indicator that tells you with arrows pointing in the direction of cant of the rifle/scope, so that you can correct.

The Thermion takes power from the external, then the on-board battery. You can buy a spare, larger APS3 just in case. The image is smooth and clear, and this is in part due to the sensor used on the XMs. It is not full HD like the XPs, but the smaller 320x240 pixel sensor combined to the smaller 12 micron pixel pitch means good fine detail is resolved. Compared to the XPs, the overall image is not as bright and contrasting but is still smooth and has a very good detection range of 1700m on the XM. This arrangement also means the native magnification starts at 4.0x on this model. To increase, the X button next to the ON/OFF increases the mag and steps from 4.0x to 8x to 16x (maximum) for and the reticle increases in size accordingly.

To access the main menu, press and hold the side-mounted button and then navigate by rotating the outer ring and press the button again to select. Menu settings include, manual, auto or semi calibration mode, reticule adjustment for colour and pattern. It has a 50Hz refresh rate, so the image remains smooth and solid as you scan with it. Field of view (FOV) is good at 5.8º and, combined with the starting magnification of 4x, is just about right for most hunting situations.

Reticle choice is personal, I set up with a central small Mil-Dot type covering just the centre portion with black stadia but with an illuminated red dot centre which worked very well. You have an 8- colour palette for detection and, unlike the Trail where a single press goes from white to black hot, the Thermion has to go through a few stages to change this. This is the only thing I don`t like about the controls, as switching between white to detect and black hot for better detail is easier.

Zeroing is coordinate-led or freeze the image mode and you can set 5 zeroing profiles and 10 distance coordinates, so you can change ammo or gun and still stay zeroed. Click values for elevation/windage is 10mm @ 100m, slightly cruder than the XM50 model at 7mm, but still has a total adjustment of 2000mm @ 100m. Remember to use the correct zero profile if you use the Thermion on differing rifles.

Another nice feature is PiP (Picture-in- Picture) here 10% of the display above the reticle can be zoomed, whilst keeping the main image wide angle. Then the superimposed reticule in the PiP can be used to shoot with or identify the target more clearly. There is Wi-Fi module and Stream Vision and you can also take images and store video easily with the third button on the eyepiece.

I fitted the Thermion XM38 to my Predator 30-47L and zeroed at 100 yards using 110-grain Berger bullets traveling at 3000 fps. I also used the thermal target from BushWear that you tilt backwards and when viewed through its rings and aiming points, clearly give off a good signature.

Using the X and Y axis coordinates to zero the rifle I was amazed at the groupings I was getting on target, (see picture) 3-shots inside 1 to 1.5” is really good. The image was smooth and altering the brightness and contrast helps give a bit more brightness as overall not as vivid an image as the XP models.

Detection range is 1700m, I could pick up foxes at 750m no problems. But as with all thermal, you need to get closer to really identify the species as a signature in white or black hot. The Thermion shows you where a potential target is, you stalk in, down wind and quiet, then view to get a clear image and shoot if its legal to do so.

One thing, which all thermal weapon sights suffer from, is that a clear image of a fox does not always show the twigs and foliage in the way, so take extra care. A bullet can easily deflect off even a slim branch, with disastrous results! I had some great foxes at maximum ranges of just over 100 yards and they had no idea I was there.

Having a starting magnification of 4x is so much better than my Trail XP38 at 1.2x and even the digital zoom only really pixelated past 8x but at 16x was still useable. I fitted it to the Sako 22 rimfire and it makes a superb rat or rabbit combo. Build quality is really first glass with a tough exterior and waterproofing to IPX7 rating excellent and it just looks and works easily on a rifle not like the boxy old models.

There is a model for all pockets and ranges, or detection required and, when you consider how much time these thermal weapon sights save in game missed, the price suddenly seems quite reasonable. Thermion is a pivotal scope that has changed the way we hunt, period.

Many thanks for Scott Country for the loan of this XM38.