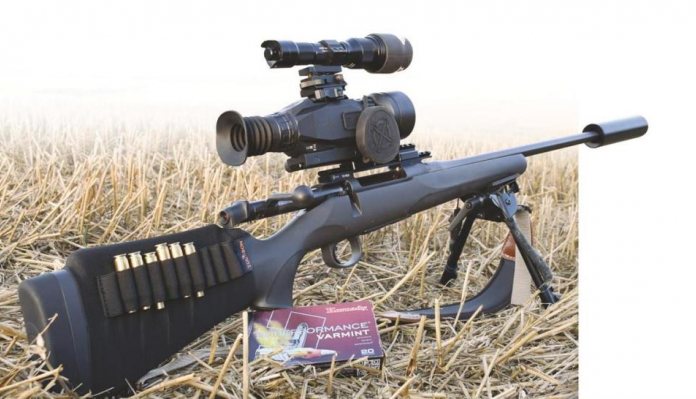 The Wraith from Sightmark is a new digital day/night riflescope with full colour imagery in daylight with green hued or clearer black and white N.V. settings after dark. An I.R. illuminator is supplied too. It has a separate mounting bar to bolt to the underside of the body; it’s a bit short and I’m told there’s an extended unit in the pipeline, to assist with varied mounting positions on any type or rifle. Save for this, I used a Britannia Picatinny extension mount that added a little height but allowed perfect reach on a bolt action. In more detail, the eye relief, without the rubber concertina tube is about 60mm for circular image picture when shooting. Compressing the buffer to about 40mm with your face shows the full extent of the corners of the internal screen for small detail icons and figures when accessing memories when in the setup procedure.

The latest colour HD imagery in daylight, with black white HD night vision both use the same 1920x1080HD. Although an 850 nM illuminator is included, the Wraith is available in a package deal with a powerful, ‘Wicked’ Illuminator for an extra £100. Alone, it weighs 1029 grams in a compact 250mm overall length with four function buttons atop the eyepiece to control the tiered electronic menu structure.

The left side compartment carries 4 x AA batteries with a run time of approximately 4 ½ hours. An additional backup can be plugged into the right-side USB port for greater runtime but does rob some Picatinny space if using an illuminator simultaneously. Pressing the centre button allows the unit to turn on with a 4 second warm up time, a brief Sightmark Logo appears that switches to your chosen reticle, ready to shoot once set up. The 50mm, focusable objective lens shows a captive, elasticated rubber cap for protection.

I haven’t tried it myself but have seen lens caps modified with a smaller aperture to improve detail and depth of focal field in daylight. I will probably try this, as an intermediate aperture can help avoiding the white out from strong IR illuminators bouncing back from close foliage or the ground itself. On such occasions, the Wraith automatically and quickly dims the display, but any preference shown to light returning from distance is preferable. There is an overall brightness setting, but no individual picture control on the fly. So, as always, it pays dividends to spend time adjusting extra IR illuminators for the most benefit, as sheer power is not always the most desirable option.

The eyepiece shows a familiar collar to focus the internal display screen and the full colour image with fast refresh rate appears without fuss or any mannerisms that would make you think it to be anything other than a regular daylight optic. Yes, a small degree of pixilation is just visible, like any digital display but nothing that will detract from image quality. Frankly, I was able to spot bullet holes on a 100-metre target from 17 HMR rounds passing through, which I feel is testament to the resolution on offer.

Zeroing involves a second press on the centre power button to initiate the menu screen. These are well laid out with clearly defined structure that felt very natural to use without excessive complication. Screen brightness is the first sliding scale, followed by nine colours of ten reticle shapes to suit your likely quarry and background. The third factor on this branch of the menu tree is rifle zeroing and similarly straightforward. Aim on target, fire a shot and then hold your reticle on point of aim while manoeuvring the secondary angled crosshair to cover the point of impact. Then, press the centre button to ‘select’ this coordinate and zeroing is complete.

Depending on range to target and bullet size, this might take one attempt or more to refine the process, but I found it straightforward and clinically tactile with no multiple button presses to reconfirm at every stage. I liked it in preference to any other system I have used, and I use a LOT of different night vision and thermal rigs. The top left corner of the display shows the designated X and Y values, so you can record these for future needs. One aspect I found most appealing, was that one tactile ‘click’ on the control buttons meant exactly that, each equal to ¼ M.O.A.

I found the scope accurate for targets from 10 metres with an air rifle up to 300 on a 243 centrefire when used for target shooting, zeroing or testing purposes. Many digital scopes are very weak in daylight, somewhat imprecise and exhausting to zero with minimal reticle travel. For an airgun or small calibre hunting rifle, I don’t think I would consider this a secondary optic alongside a daylight scope, I would consider it the only thing I needed! Knowing I could alter zero without undue concern on centrefires enabled me to pre-select known point blank zeros for my 223 and 243 for point and shoot night-time foxing or rabbit control with confidence.

Five rifle setups can be stored with a decent return to zero from the mounts when swapped between my Weihrauch HW100, Rimfires and Mauser M18 for differing purposes. Each ‘weapon select’ choice retains the zero, chosen reticle and colour and, over time, I developed confidence to swap the sight as regularly as I swapped rifles. However, I always use a torque wrench when clicking on and off differing Picatinny rails for the best performance. Further menu stages enable video or still capture choice, time date setup, video playback, factory data reset and firmware upgrades. So far, none of the latter have been needed and there have been no unwanted freezes, crashes or problems at all. I first saw this unit at the British Shooting Show in February and am glad it has not been rushed to market without full Beta testing done in the factory, rather than customers’ time and effort.

Internal screen field of view is a landscape-oriented rectangle when pressed in close. But with 60mm eye relief for the shooting stages you have retreat to a familiar circular rather than square image. The magnification is fast to alter on the control pad, with 4-32x on offer with realistically increasing levels of pixilation, I generally stayed around 10x and it always returns to baseline when power cycled.

The advertising claims that the Wraith offers viewing at 200 yards, with the included ambidextrous 850 nM IR illuminator, swappable to either side from its upper Picatinny rail mounting point to stay clear of the focus ring behind the objective. It features a ball mount, so when pointed exactly on your zero position, it nips up securely avoiding accidental movement. There are three power settings as well as focal control, so perfect for airgun and 22 rimfire shooters out to 100 metres, but a little strained beyond that.

The most impressive factor for me and one I felt most exciting about, was the Wraith’s performance at dusk. Here, digital NV can really struggle to pick out rabbits unless moving, or with excessive IR use needed to try to stimulate some eye shine. Here, it mastered fading light, remaining in full colour mode, I found it maintained detection and aiming capability on quarry, far beyond my own human low light vision and that of my high-quality binoculars in fact. I was oblivious to a Hare creeping towards me within my peripheral vison that Wraith alerted me to. It was a little pixelated with the type of ‘noise’ digital cameras and phones get during darkness, but far better than I would have deemed possible in this price bracket. It’s a point to make that this was superior to the capability of a similarly priced conventional riflescope I had with me at the time!

When totally dark, I switched to black and white NV mode with a single press of the left keypad control. A second press brings the green/black mode into play, but this wasn’t of any benefit and a third press returns to daylight mode. Ten reticle choices allow you to choose how fine for precise aim or coarse for immediate visibility suited your needs. Either way, the inner screen was always in focused edge to edge with no pinhole sweet spot. The ability to move back and forth in the eye box was noticeably good without losing focus.

I paired the Wraith to a Wicked Light, to illuminate with more power and 200-250 metres foxes were comfortably aimed at with good movement smoothly rendered. Identification was good and although ‘visible’, 850 nM wavelength is the better compromise for NV. Magnification control was quickly available, with light button presses and no unnecessary reach, so tailoring the magnification versus field of view was an intuitive rather than aggravating arduous task. You need to remember if you do power cycles to save batteries in darkness that the scope fires up in daylight mode! So, don’t forget to give the left side of the keypad a press to re-initiate NV mode before you panic, and your illuminator batteries are dead.