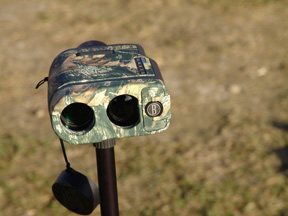 In terms of laser rangefinders it seems to me that Bushnell pretty much wrote the book, as they have been supplying distance-measuring devices for a long time. They were also one of the first optical companies to offer a unit integrated into a set of binoculars. However, they have been notable by their absence in the 2nd generation systems that offer all sorts of features on top of the basic rangefinding function.

Leopold’s RX range appears to be hogging the limelight at the moment and though I like their RX1, I have found the more comprehensive RX III a bit awkward to use in terms of navigating and selecting options from its large menu. But now Bushnell have made their move with the Angle Range Compensation unit or ARC. And I feel they have been biding their time to get it right, as though similar to the RX III it’s easier to use, less complicated and, dare I say it, the optics are better?

The ARC comes in Mossy Oak’s Break-Up camo pattern, so was already scoring points with me. Medium sized at 1.7 x 5.1 x 3.7” and 10oz, there’s enough to get hold of, but it’s not too big or heavy for one handed use.

Wisely Bushnell has included a standard tripod thread, which allows some flexible mounting options. The optical specification is 7 x 26, which offers a practical magnification and field of view, with all lenses being multi-coated for best performance. Rain Guard coatings are applied, which should allow better wet weather operation. The LCD display is black and large enough to see easily, with a simple circular aiming mark. Bushnell has resisted the urge to offer lots of different reticules (unlike Leupold), as the circle works well and is less confusing.

Controls consist of a rubber-covered power switch (ON/OFF) on top, which is long and easy to locate and operate even with gloves on. The eyepiece shows a lens cover (with tie cord) and a screw up/down cup. The focusing ring is large and easy to operate and sits behind it. On the left is the MODE button, which allows you to navigate the menu and select functions. Power is supplied by a 9V cell that loads in the front end to the left of the laser tube. Unusually Bushnell doesn’t include a battery, unlike every other rangefinder manufacturer, so that must have saved them a lot of money! Finally there’s a semi-rigid case/belt pouch and a lanyard.

All 2nd generation systems offer a multitude of functions – bow mode, first/last target, rain compensation, temperature etc, some of which are wasted on Britsh shooters. The most useful is to be able to get your range/aim point correct for a flat or angled shot. Which in the case of the latter will always rise and shoot high, whether the angle is up or down, so you need to aim lower to compensate. This will naturally vary according to the angle and distance you are shooting at and the ARC has an internal, Sierra-based, ballistic programme to allow this to happen. It offers correction up to 60° either side of horizontal, which is more than enough.

The ARC can range targets in yards or meters from 5 to 1500 yards (1372 metres). Bushnell cover themselves by saying, “the maximum range for most objects is 1000 yards”. With the maximum range only applying to those items with a high reflectivity factor. These two statements pretty much hold true for any make of laser rangefinder, though effective operating ranges will vary. I doubt however, if the average Britsh hunter will bother shooting deer much past 300 yards, so the ARC with its 1 yard/metre +/- accuracy will be good enough.

The ARC offers three basic modes – BOW, RIFLE (both with angle compensation) and STANDARD (line of sight ranging only). Then the selective targeting modes - SCAN (multi-target ability), BULLSEYE (precise ranging on smaller targets) and BRUSH – the ability to ignore foliage (branches/brush) and only get a reading on the background object. All these appear as symbols and are easily selected by use of the ON/OFF switch and MODE button, as is the yards or meters option.

In both BULLSEYE and BRUSH modes, the user has to keep the power button depressed and ‘paint’ the target with the laser to achieve a lock. With the former, four lines will appear around the bullseye icon when the nearest target has been acquired. A circle shows around the latter to indicate the farthest has been located and not any clutter in front of it.

Of most interest to us are the rifle (ballistic) groups, which allow range/angle compensation. There are eight (A to H), which covers the majority of popular calibres/loads and a CD that offers 1000s is included. Plus a kind of ready reckoner if your particular cartridge/load/reload is not listed, this however requires you to work out your bullet drop at 300 yards. The ARC function bases all calculations on a 100 yard, base zero.

I’m in the process of working up my custom Winchester Model 70 in 300 WSM using their 180-grain Fail Safe ammo. Checking out the ARC data shows that this load is in group F and indicates a speed of 2970 fps. Over my chronograph this ammo averages 2913 fps, which is near enough and running this data through my Sierra Infinity V ballistic programme and also my Slope Doper (angle calculator) gives similar figures. Certainly enough to believe what the ARC tells me when I range a target be it on the flat or at a significant angle.

On that point the ARC offers the corrected drop in inches or centimetres (metric selected) and also shows the angle in degrees, so if you don’t believe the first figure you can work it out yourself.

In use I found the ARC to offer a crisp and wide field of view, the focus ring worked well and was easy to operate. When you fire the laser, four lines appear around the aiming circle to indicate this has happened, and then disappear. Also shown is your menu selection - in my case the image of a scoped rifle (RIFLE GROUP), plus the ballistic group (F). For a control I used my Leica BRF 8X50 laser rangefinder binoculars, which are probably the best there is and up to 500 yards the ARC kept up with them well enough.

Out to about 400 yards I had no problem ranging targets, but past that and using BULLSEYE and BRUSH modes you do have to paint the target with the laser heavily to achieve a lock. If not you don’t get a reading.

I have rarely needed to calculate an angled shot, as even from a high seat the actual compensation is minimal. And on the rare occasions I have, used the FBI ‘quick fix’ method, which is fast and effective! Likewise the bullet drop on a horizontal shot, I range the target and use my ballistic date to get the required hold over.

But the ARC will handle both of these tasks automatically leaving you just to act on what it tells you. And this is the leap of faith you have to take with any laser rangefinder - believing what it says and acting on it.

Overall I was most impressed with the ARC, it handles well, the optics are good and it offers a simple and easy to use menu, which is comprehensive without being overly complicated. And the ability to factor in your ballistic data for both flat and angled shots means in theory more accuracy and one shot kills. Despite the ludites amongst us, there’s no doubt in my mind that laser rangefinders in general have revolutionised deer hunting and allow all of us to be able to shoot more effectively.