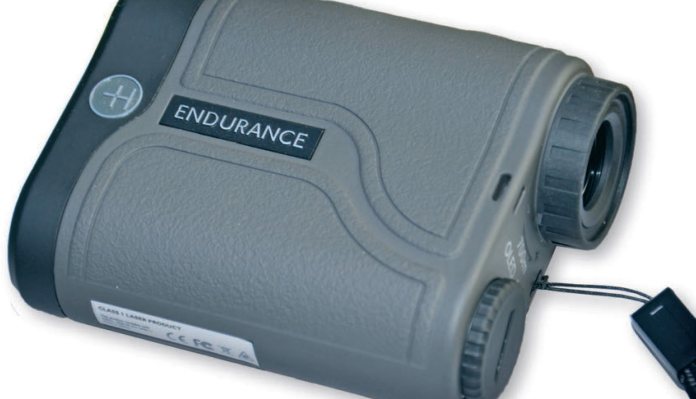 I’ve had a few bizarre conversations with shooters over the years, who consider that technology is somehow ‘unfair’ on our quarry, and gives us an advantage, which is unsporting. No really, and to anyone out there who concurs with such claptrap, let’s start with a resounding- “oh do leave it out, Sir!”

Live hunting is a privilege that needs to be earned and carried out for the right reasons. First and foremost is our requirement to be as sure as we can of a clean shot. Avoiding unnecessary suffering and wounding has to be a priority, and if the technology exists which can seriously tighten the odds in our favour, in my opinion, we should all be using it.

Modern rangefinders are incredible tools and have been around for a while now. Yet, as with most of our kitbag, subtle improvements are ongoing, as manufacturers continuously strive to push the boundaries. On test here is one of the new models from Hawke Optics, the Endurance 700. My first impressions are that at 1.4” wide, 3.8” long, and just 6oz in weight, it’s just so brilliantly neat and compact. That lightweight build coupled with an ergonomic profile means this little gizmo is the perfect companion for fieldwork in a variety of scenarios.

Hawke produces two model ranges, the Vantage, using LCD displays, and these Endurance models, that utilize OLED displays with red illuminated icons and 6-levels of brightness. OLED stands for Organic Light Emitting Diode, and they seem to be a step forward in terms of technology, apparently requiring less power to do the job. Hawke employs a fully multi-coated optical system using BK-7 prisms with these range-finders, along with a widegizmo angle optical system. They also specify high light transmission with true colour optics. 6x magnification is a bonus too.

Look to the rear and the top rubber protected ring is the adjustable dioptre. Twist to alter focus to suit personal eyesight, as we do want to start with a fairly sharp image. With this set, it’s time to insert a battery. One CR2 Lithium 3v battery powers this device. Just unscrew the small cover using a coin if necessary, and drop the battery (supplied) into position. Screw back the cover and we’re ready.

The LRF700 has several rangefinding modes, and these can be changed by first pressing the power button, then pressing the mode button and cycling through. Distance, Rain, Hunt, Horizontal Distance, and Angle are all different modes available. Changing the display from metres to yards is easily done, just hold the mode button down for 3 seconds, and toggle between the two.

Distance mode is self-explanatory and gauges the distance of a target/ object. Switch on, hold the device steady on the target, press the power button again, and the range will be displayed. Rain mode measures the straight line distance to a target but ignores interference from rain. The target needs to be more than 33 yards away in this mode. Hunt mode is supposed to ignore interference from long grass or foliage between you and the target. Horizontal Distance is clever, and here you zap an elevated target sitting up at an angle, and then you are returned the horizontal distance in the display. This gives the shooter the opportunity to allow for the trajectory over an elevated target. Angle mode shows the angle at which a target is sitting, and this shows in degrees on the display.

So how did the tests pan out? Well, the straight-line test over airgun distances came in within a couple of yards every time. Testing long distance, I could get out to check over 350 yards and again readings were within a couple of yards. I found that some small targets couldn’t easily be picked up but nearby bushes did the trick. The logical approach with range finders is to take an average of a few readings in any case. Angle mode is interesting, and it’s handy to see the figure in degrees for reference, again in conjunction with known trajectories at known distances and angles. The Horizontal Distance test worked well, except I did find that it paid to have the Hunt and Rain modes switched off, as figures were occasionally erratic when they were left on.

As mentioned earlier, the display is specified as red, yet in use, on my test model, it was clearly orange. To change the brightness level, first press the power on button, then keep pressing the mode button until all the icons are showing on the screen at the same time. The brightness level will now show in the centre as a number. Pressing through the power button then selects your choice. I found level-3 to be perfect, without being too bright. Any higher, and there can be glare. There is also the basic but brilliant feature with this device, in that it shuts off automatically after 15-seconds, so battery life is protected.

My occasional hunting forays now invariably include taking a range-finder along, and with most of my outings being more of a mini stakeout rather than a rough shoot meander about, I normally have time to zap the terrain. By that, I mean range find the distance of obvious landmarks on either side of where you expect your quarry to emerge, and then you’ll have a good idea near as damn it, as to their actual distance on arrival. As mentioned, minimizing the chance of wounding, and maximizing the chance of accurate shot placement is the name of the game. The LRF700 in that respect is a game-changer.

All the usual reassurances for optical equipment come with the LRF700. It is nitrogen purged, waterproof, fog-proof, and comes with a 2-year warranty from Hawke. And as their product catalogue suggests, ‘whether shooting, taking part in archery, golf, or out running a site survey’, this wonderfully compact rangefinder is the perfect companion, being super neat, compact and a handy tool.