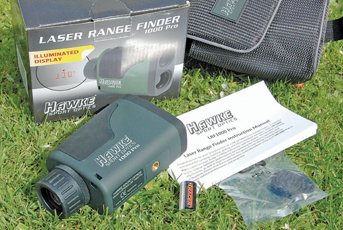 Being able to accurately determine the range of an object is invaluable whether hunting, shooting knock-down plates or even laying a course of fire, the brief is the same - pin point accuracy. Trying to judge distance by eye is a skill in itself, but where possible, (HFT competition doesn’t allow rangefinders) if the odds can be stacked in your favour, and much of the human error eliminated, then why not?

So what does Hawke Sport Optics LRF Rangefinder Pro 1000 offer? Operation is simple, press the power button and a red LCD display appears. Point the unit at the chosen subject and hold down the power button. Once the red dot appears superimposed on the centre of the target, hold steady and release the button. The unit determines the distance by measuring the time taken for the laser beam to go out and bounce back off the target. The range then appears in the viewfinder. Its clever stuff and under the right conditions it will calculate the distance to within a yard or so.
Distance can be read in either yards or metres, toggled to one or the other by pressing and holding the power button, whilst also pressing MODE. There’s only the two buttons and with a decent set of instructions supplied, it all soon becomes clear.

The Hawke LRF1000 has a subtle rubberized finish and an adjustable eye piece along with a focusing ring. It can also calculate for angled (up or down hill) shots and shows angle and the horizontal distances, which is done in BC (Ballistic Compensation) mode. The red LCD display offers two levels of brightness.
Performance can vary as laser rangefinders are affected by target reflectivity, colour, shape and size. Likewise mist can play havoc with them too as the beam gets confused by the water droplets in the air. So don’t assume it’s broken just because you don’t’ get a reading! It’s also very important to
hold steady as it’s too easy to be over or under the target and still get
a reading.

I ran a series of checks, starting of course with typical airgun distances, given my main interests. The minimum 5yd readings came in fine, and the claimed accuracy of +-1yd was certainly born out with everything out to 50yds.
Moving to greater distances, and using 3ft road signs as a subject, I found I could achieve consistent readings out to about 400yds, checked to within two yards. A three foot target begins to look small at this distance and keeping the aiming mark steady on the subject, was the key. Past this and the target would need to be much larger to allow for the reading to be taken. A navy blue car ‘pinged’ at the 400 point varied by around three yards depending on whether the number plate was hit or the bodywork, which was interesting.

The unit uses a CR2 Lithium battery, which should last quite some time. The spec of 6 x 28 gives a good field of view , while full water proofing adds to the feeling that this device has been well thought through. Being able to mount the LRF1000 onto a camera tripod via the standard thread is just the icing on the cake.

I’ve heard it said that it’s unsporting to use rangefinders for hunting! That doesn’t stack up! Surely it makes sense to use every available tool at out disposal to maximize accuracy and minimize wounding our quarry? To that end, this LRF1000 from Hawke Optics is an invaluable piece of kit that earns a place in the kit box on merit.