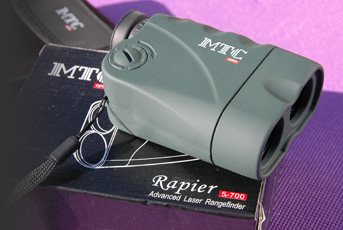 The ability to accurately judge range has many applications right across the shooting sports spectrum. Obviously for the outdoor airgun disciplines, where this ability is actually part of the competition (i.e Hunter Field Target Shooting and FT), the use of range-finding devices, other than a conventional telescopic sight, is strictly prohibited.

Yet that still leaves a wealth of situations where the utilization of modern technology could only be seen as a bonus.

The modern laser range-finder has really shown the way, and with an ever increasing number of models finding their way onto the market, to suit varying budgets, today’s shooter is somewhat spoilt for choice.

MTC Optics entered this market with their popular Optisan built Strike Inno models, but their latest model, on test here, promises to go one better.

The Rapier 5-700 derives its model name from its function; being able to read target ranges between 5 and 700 metres. Whilst the outer distance is largely academic to many, that minimum distance is obviously of use to airgun shooters, although my excellent Strike model could handle around 8yds in any case.

Where this new model really scores though, is with the small target scan mode. Laser range-finding devices such as the Rapier rely upon the firing of a laser beam onto a target, with the beam bouncing back. The time it takes for this to happen is then calculated, which is converted into a distance reading. Accuracy in the system is therefore dependent upon the beam precisely hitting the spot, but in use, different surfaces and light can affect the proceedings. In addition, it can be difficult to pinpoint a small target at distance - which is where the Rapier’s Scan mode comes in.

Operation is simple. Just hold the instrument with the soft rubber eye cup to the eye, and press the ‘Action/on’ button. This brings up the internal display with a central target area. Results can be relayed in either metres or yards. To switch between the two, just press the ‘Mode’ button.

Switching between normal and scan modes was a little more confusing to start, since the instruction leaflet said to press ‘Mode’. On my example, I found that one press of the ‘Action’ button would take a single reading, or if this same button was held in hard, then ‘Scan’ appeared. Keep the button depressed, and continuous readings are taken, which has the benefit of helping to locate a smaller target, or even a moving target, in a hunting scenario for example. An auto power off after 30 seconds helps conserve the life of the CR2 3V lithium battery.

My test readings came in within 1yd at 100yds, within 2 at 200, 3 at 300, up to a possible error of up to 12yds at 700. The manufacturers claim of +/-1metre accuracy is a little hopeful, but the results are still excellent in my book, giving vital feed back to the outdoor sportsman when it matters most.

It should be noted that some erroneous figures did occasionally show, normally as a wildly different figure from the string, when extremely bright direct sunlight was in evidence (yes it’s hard to believe, but the test took place on an amazingly sunny day!), but with several readings taken, it was easy to call any spike.

In normal conditions, the Rapier performed well, and would be a great asset to any hunter or club for that matter, enabling target ranges to be quickly confirmed at a stroke.

Super compact dimensions of 3x4x1.5inches - and a low weight at just 6oz - means that this device fits neatly into a pocket for immediate field use when an opportunity arises, whilst a tactile, rubberized finish adds refinement to the end product.

All in all, a neat and effective tool.