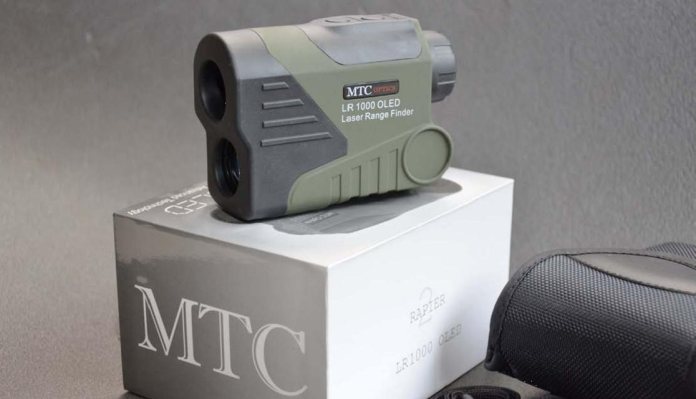 Weather conditions can hinder performance and alter readings with laser rangefinders, and this happens across the board; whether on too bright a sunny day, or the more understandable hazy/foggy day. It’s just something to bear in mind. Likewise, angled targets or dark targets can play havoc with accurate readings, or any readings!

In addition, when out in real world hunting scenarios, trying to zap a small rabbit in flickering conditions, in long grass, could just as well pose a problem. Okay, I’m highlighting the negatives, and once you stop expecting perfection, you can relax, sit back, and marvel at the modern rangefinder for what it is, a brilliant little handheld device, that adds a new dimension to hunting, and other pursuits in the field.

I tested one of the early Rapiers, and it did its job perfectly well, but I have to say, whilst this new model is undoubtedly a bit more angular than several ultra-ergonomic rivals currently available, I reckon the designers have got it about right. The textured, rubberised body feels solid, well made, comfortable, and easy to grip in the field. The Rapier 2 runs on a CR2 3v battery, and the user even gets a low power level warning. which is handy. New to the Rapier 2 is the OLED technology, and this basically means that we have an LED display, which we can see through, allowing readings to be seen in relatively low light.

Controls are nice and simple, if a little vague in feel, with the nearest button the power button, and the only other button the mode. A quick glance at the instructions booklet had me chuckling, as in small writing, under mode selection, it reads ‘we’re never sure why our designers are determined to add a speed function, but it makes them happy’. Anyhow, it’s here. Whilst in ‘Mode’ function, the user can toggle between ‘Distance’and ‘Speed’. It can also switch between yards and metres.

Distances are shown to one decimal place, and the orange LED internal display proved to be very handy in low light conditions. The brightness, incidentally, is manually variable, and on test, on bright day, it needs to be turned up quite high. One final function allows the user to switch from a single reading, to ‘Scan’ mode, by holding the ‘Power’ button down for around 8-seconds. Scan mode then sounds out continuous readings to hit an awkward object for example, but the unit will default to single mode, in order to save battery life.

To give an idea of accuracy over airgun distances, this model was zapped three times over 20-yards, and returned two readings one yard out, and one spot on. Likewise, at 30-yards, one yard either way.

For the record, the minimum stated operating distance with this latest Rapier 2 is down to a super close 7-yards; and over this distance, when faced with a dark target, I came away a yard out. On a bright target, spot on.

Deliberately operating the device into bright sun, not something recommended, but an interesting exercise nonetheless, would occasionally cause a non-read, but I consistently read to within plus or minus one yard up to 100-yards, manually clocked and measured for the test. We can determine then, that airgun use is absolutely spoton in most conditions. Keeping things real world, the test was pushed to 300-yards, and here, readings came back within 5-yards. Still highly creditable, for such an incredibly neat and compact handheld device.

With MTC now coming under the wing of the group that owns Daystate and Brocock, the brand look guaranteed a bright future. Indeed, with products like this Rapier 2 LR1000 OLED Rangefinder in their line-up, I wouldn’t expect anything else.