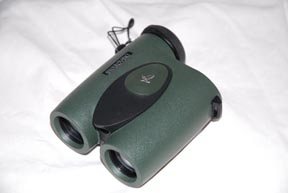 This is not my first look at the Laser Guide as it came out at least two years ago and I tested an early model. But the hand-held laser rangefinder is such a useful item for the hunter and with many companies offering more than one model; I thought it would be a good time to re-acquaint ourselves with what Swarovski has to offer.

Though offering the same function as any other rangefinder the LG is configured slightly differently with an almost binocular-like build and feel, as though a monocular it appears to have two ocular lenses. Also the spec is 8x30, which is a little more powerful than other examples with what is in fact a wider objective lens by comparison.

Still made in Austria, which is comforting as the prolific, German Leica models are made in Portugal, the LG is reasonably compact and light measuring 5 x 3.25 x 2” and weighing 13.65 oz. The body is green rubber armoured with a textured finish for added grip.

The eyepiece is on the right and is focusable and can be pulled out to suit glasses wearers, this connects directly to the right hand (observation) barrel. The left hand barrel is the laser receiver unit and its 30mm objective does make ranging that bit easier, due to its reasonably large diameter to receive the beam back. The laser projector sits in the middle of these two and behind/above this is the large operating button. The display is simple with an orange aiming circle and three horizontal lines below it, which shows the distance or flashes if it doesn’t register it.

Power is supplied by a single CR2 3 volt battery that sits at the rear of the laser barrel behind a plate and is rated for 1000 pings. With the cover removed you can see the selector that allows you to switch from yards to metres notation. The LG comes with a padded neck strap and a plastic, quick release belt holster that protects the objectives in transit. A rubber cap with cord retainer covers the eyepiece.

Swarovski says the LG is good for 1600 yards, with a +/- figure of one yard either way. I did not take it out that far, for the simple reason as the distance increases it’s all too easy to get false readings (over or under) due to being unsteady on the aim so not bang on target. Also the size/colour/reflectivity of the target will affect performance and all become larger problems as the range is pushed out to maximum. Personally for the hunter as long as the unit can range a deer out to 600/700 yards that’s more than enough. This is a problem with all hand-held devices, as I even get this on my Leica 8x56 laser binos (BRFs). What you are really looking for is optical quality and measurements you can trust, out to a maximum practical range and the LG can certainly offer that…

I took the LG hunting a few times and also compared them to my Leica BRFs, which I consider very much the benchmark in this area. Out to 700 yards they were inside2-3 yards of each other, so more than adequate. The extra few millimetres of objective, lens quality and x8 magnification make the Swarovskis just that bit better in terms of observation than comparable monocular designs.

The LGs offer a scan mode so you can ping multiple targets. On that point once you have ranged the display stays lit for approximately 20-seconds, which I thought a bit too long. In low light conditions you tend to see an opaque, orange oblong (below the aiming mark), which is obviously where the range read-out displays. As I recall on the first model I tested a few years ago this orange glow was all-pervading and tended to blow the view a little in dark woodlands and dawn/dusk. This problem was not so obvious with the latest version.

Light and compact with an easy and ergonomic feel about them the LG 8x30s are a monocular design that feels and handles like a set of compact binos. The larger operating button is easy to locate and work even with heavy gloves on. According to the blurb they are good to work in temperatures from 14° to 122° F and waterproof to 13 feet, so cold and wet isn’t going to be a problem, though carry a spare battery as low temperatures will drain the hell out of the power cell.

Price-wise and as with all Swarovski products the tag is reassuringly high, but build and optical quality is good, as you might expect. For a change I went on a number of websites of both gun shops and optical outlets and found prices ranging from £433.19 to £519, on the whole the gun dealers were slightly cheaper… So look around.