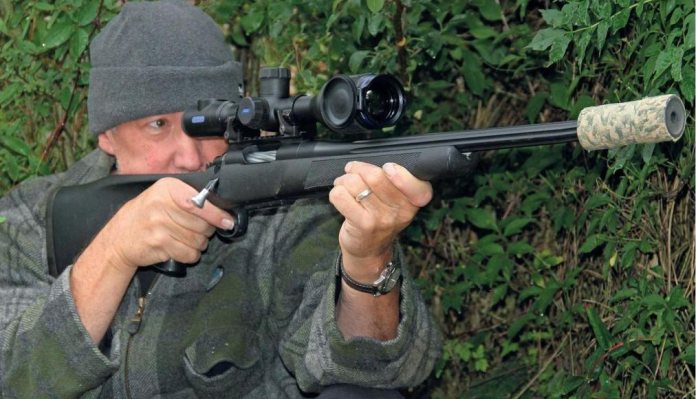 The Thermion line of thermal weapon sights broke the mould when they appeared, rewriting the thermal design rule book. Looking just like your normal rifle sight, the Thermion is now available with XM, XQ and XP thermal sensors. The XM models have a 320x240 12 μm sensor the XQ models a 384x288 17 μm sensor whilst the XP models use a 640x480 17 μm sensor. All use a 1024x768 AMOLED viewing screen.

On test is the XQ50 which is priced at £2949.95. The XQ is now not out of the realms of many shooters who would spend that sort of money on a quality day sight.

The familiar setup shows a 50mm objective lens (38mm version available) and eyepiece lens joined together with a 30mm main body tube, which is satin black hard anodised. Mounting a Thermion is really no different from a normal scope, which is a real advantage when it comes to weight distribution, handling and operating controls. The XQ50 has an IPX7 rating, weighs 0.9kg and measures 407x78x80mm.

You have a very wide and tactile rubberised focus ring, so focusing is very easy and sure-footed. The 50mm objective size still allows low mounting of the scope to the rifle. There is also a very good flip-open lens cap to keep the rain and debris out.

The eyepiece has a fast focus-type adjustment too, which helps to provide a sharp image of the AMOLED screen and display details. You can also fit a rubber gator - which is supplied - to cut out any distractions. It is useful in daylight zeroing periods as it allows you to see the screen clearer. At night time, it stops the screens shine reflecting off your face.

The central saddle, which would normally house the elevation/windage or side focus on a conventional scope, has been replaced with a battery, charging point and side operated menu system wheel.

The top turret cap is removed to reveal a housing for a Li-Ion battery, and what would be a windage turret, is where you plug in your USB cable to charge the XQ50. This onboard battery is charged first, followed by the removable APS2 or larger APS3 battery, both showing their state of charge or fitment on the display. The normal on-board battery lasts about 3-4 hours, dependent on scope use and temperature. Having the removable battery fitted doubles the run time.

On the left-hand side are the main menu button and navigation wheel. The remaining controls are mounted on the eyepiece in a raised circular turret. A single push of the blue power button switches the XQ50 on almost instantly and a long three-second hold turns it off. There is a ‘Display Off’ facility too for instant start up again when dormant, this feature helps to preserve battery life.

In addition to the blue power switch, there is a zoom button and a record button for pictures or video. Resolution is 1024x768 pixels and they are stored in the 16GB internal memory.

Having the XQ thermal 384x288 17 μm sensor fitted and a frame rate of 50Hz means it is not full HD like the XP version, but it still delivers a very good blend of detection range, clarity, detail and contrast.

It has a detection range of 1800m for a deer-sized animal, so a fox would be half that. However, in use and with high temperature contrasting nights, detection can be better than you think, even for small rabbit-sized game.

Of course, you can adjust the contrast and brightness of the image by pressing the inner section of the side wheel. You can also adjust the range finder, it uses stadia lines to bracket different sized game as indicated on the left portion of the screen.

All information, like the zero profile, calibration mode, magnification, microphone on/off, time and battery status appear at the bottom of the screen. The camera or video appears in the top left.

To access more features through the main menu, you press and hold the sidemounted button, then navigate by rotating the outer ring. Then, simply press the button again to select.

The menu settings include manual, auto or semi-calibration mode and I set it on auto to keep the image spot on. There are 10 choices of reticle and 11 different colours and styles. I chose the ‘H50i’ ret, which is superb, as it worked well with black and white-hot. It has an elongated plex-type profile with a floating centre cross, and in the yellow colour, it worked extremely well.

You actually have an eight colour palette for detection, but changing between black and white-hot is via the menu, which means several button presses. I like to switch rapidly between the two and as a result, I much prefer a single external button like the one found on my Pulsar Trail, as this is easier.

There is an image boost option - which I switched on - that enhances the image and a zeroing profile to chose which zero or rifle you want to use.

When accessed, the zeroing in feature allows the user to alter the elevation and windage coordinates (X and Y axis) and visually move a red cross in the viewfinder to alter the zero. A long push then sets this zero with a big tick in the viewfinder to confirm. There is also a freeze option, this allows an instant movement of the reticle to the bullet impact point. Both work well.

It is worth noting that eye relief is quite close, so take care with rifles that recoil heavily, although it can handle the recoil from a 6000 joules gun.

Adjustment for elevation/windage is 13mm at 100m (per click), so about ½”. This is more than the XM50 model at 7mm but you still have a good range of adjustment; 2600mm at 100m for both elevation and windage. I had no problems with it at all. You can store up to five zeroing profiles (with 10 distance coordinates).

The magnification range is also a nice feature of these Thermions. This XQ has a 3.5x native mag with a digital zoom to a maximum of 14x total. With each press of the zoom button, it is 3.5, 7.0 and then 14x. A continuous hold brings up the Picture-in-Picture (PiP), where 10% of the display above the reticule can be zoomed whilst keeping the main image wide angle. The superimposed reticule in the PiP can be used to shoot with or just used to identify the target more clearly.

I found that the thermal signature targets from BushWear proved very useful when zeroing the Thermion. The X and Y-axis coordinates to zero proved easier than I thought at first, just remember to save it!

The image was brighter than the XM models, with better inner detail and overall contrast and definition to my eye. Obviously, it was not as good as the XP models which use a larger thermal sensor.

At low mag, it is capable of detecting the faintest glimmer of heat from a warm object, allowing a shooter to stalk closer and identify their target. I managed to detect foxes at 600 yards and rabbits at 300. The level of detail is amazing, considering there is no optical pathway, just heat detection to form an image.

Having a starting magnification of 3.5x power is so much better than my Trail XP38 at 1.2x. Even the digital zoom only really pixelated past 8x power, but at 14x was still useable.

Build quality of these Pulsar Thermions is very good and backed up by Thomas Jacks trained specialists. The scope like qualities and overall performance is the way Thermal weapon sights are going into the future. This XQ model is reliable, offers great performance and is very well priced.