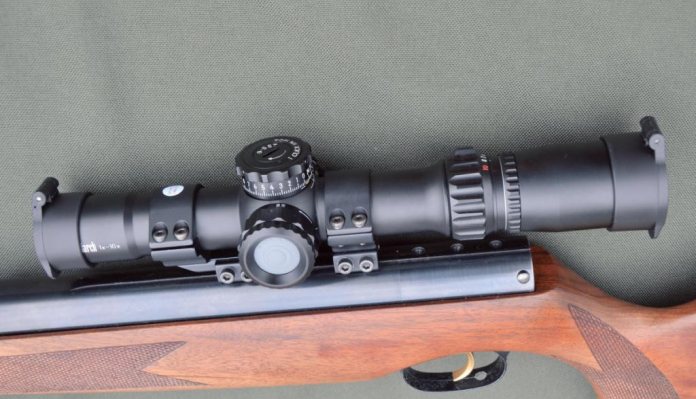 I first became aware of March Scopes when top shot, Connor McFlynn won the Field Target World Championships in 2011, using a March X 8-80 x 56 model. Those figures are correct, as this dedicated FT machine magnifies from 8x, right up to a colossal 80x- and this remains the highest magnification of any scope available. Of course, FT requires high mag to create a shallow depth of field, which then makes range finding the target, via parallax correction, that much easier.

With my chosen discipline now Hunter Field Target (HFT), ultra-high magnification is rendered useless, due to the key rule of no adjustment being allowed for the match duration. But when a friend at my club turned up with one of the super slimline, tactical models from the March range, I was interested to see how the specification would look, and just how useful it would be for our branch of the sport. A quick call to March Optics, and a test model was soon winging its way across.

The model on test, here, is the March 1-10x24, and as the product model number D10V24TI denotes, this version comes with reticle illumination, which does load around £500 to the list price. I’ve never been that bothered about lit scopes, but I know plenty of shooters who are. Anyhow, the option is there, and you can avoid it if you want, and save yourself some notes at the same time.

March scopes are manufactured in Japan by the Deon Optical Design Corporation, and the build quality is immediately apparent once you have used one. A nocompromise build philosophy means that these precision instruments are astonishingly well made. Finish is robust and sees the 30mm body tube matt black anodised. Simple lens covers are supplied, along with push-fit, flip-up covers, which feel nicely made, and are easily slipped into place at each end. A sunshade is also supplied apparently, although this was missing with my test model, which admittedly had come from March’s review stock.

Low profile tactical turrets are ideal and so much more practical than the trendy great towers on certain rivals. The characteristically over-sized top elevation dial is precisely and simply marked up with 1-24, and carries rotation indicator markers, which is brilliant, to keep track of any major adjustments made, and eliminate any disaster where the turret has been altered, then is sitting a complete revolution out of zero. I’ve seen this done, although admittedly a more likely error in FT, but a great feature, nonetheless. In addition, it can be set to ‘0’once the zero point has been set, by slackening a small grub screw and rotating the loose cap (now free from the mechanism) as necessary. As for the windage turret, this is marked up to show L and R movement from 1-12 in each direction, and again, can be zero set, once the mechanism has been adjusted.

Having used my famous old West German made, Zeiss Diavari-C 3-9x36 (an obvious benchmark) for many a year, few scopes can compare for the sheer robustness of the turret mechanism and build quality in general, not to mention the image quality. This March is on an equal footing, which is top praise believe me. Twist either turret and the firm resistance and positive click is all you need to appreciate the integrity of the engineering on display. Yes, of course, you’re paying for the privilege, but this is an exceptional piece of kit.

Zeroing this model is simple enough, and there’s plenty of adjustment on offer- 1/4MOA clicks, 100 clicks in a revolution, and over eight full rotations possible in each turret. Opt for a Mil Line reticle, and the values change to Mil Radian. Image quality is pin sharp edge to edge, and the MTR5 reticle fitted to my test model is an interesting option. There is of course a choice of reticle with these scopes, and for the full range and specifications of what is possible, see the March website at marchscopes.co.uk. The MTR5 as shown, offers a floating central dot, and stadia extending left right and down. The small subdivisions on the horizontal are 2MOA when viewed at 10x magnification, and this is of course an ideal mag for HFT shooting, where, as previously mentioned, the scope needs to be set and then left for the course of targets.

Parallax can be corrected via the drum on the left of the saddle and there’s reassuring resistance as it turns; likewise, the magnification collar, which won’t be shifting accidentally any time soon. Reticle illumination is activated via the subtle pressure switch in the centre of the parallax drum, and this takes the normal coin-type battery. Just the central dot lights up, and there are four brightness levels of red, before it turns off. With the focus set to around 25-yards, and shooting on 10x mag, I found clarity very usable indeed through the ranges for HFT – 8- to 45-yards. As expected, some blur at the closest distance, but usable, at both 8- and 10-yards, then fairly clear at 15, and pin sharp thereafter. Minimum parallax is 10-yards if adjusted out, for the record.

March scopes are specified as guaranteed for five years, but once you come to appreciate the quality, it’s clear that this time frame is academic. I’ve used my old Zeiss for over 30 years now, and it looks good for another 30; not sure about me! March feel in a comparable league, and if the RRP doesn’t bring you out in a cold sweat, then this wonderfully compact 1-10x24 model represents a serious and sound investment.