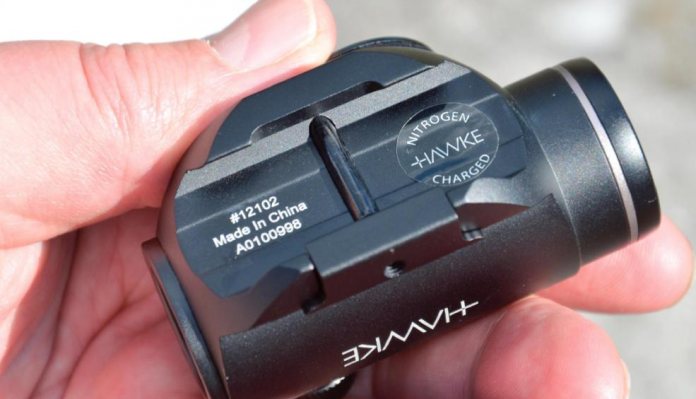 Red Dot sights are an exciting option, and a radical departure from conventional scopes.

In fact, there’s something quite liberating about switching to one, after using a scope for an extended period.

It’s not just about being different though, as the red dot sight is an incredibly versatile tool. And a big part of that, comes with how the sight is positioned in relation to the shooter. Where a conventional scope normally dictates around three inches of eye relief, i.e. the shooter’s eye has to be three-inches behind the sight to obtain a full sight picture, the red dot has no such restriction. That means that it can be ideal for pistol use, where, held at arm’s length, the sight could be some two feet away. Alternatively, mount at point blank to the eye and the unit is still perfectly usable, and everywhere in between!

On test here is one of the brand-new models from Hawke Optics, and I have been itching to play with one of these ever since I saw it displayed at the British Shooting Show, earlier in the year. My model is the Vantage 1x20 Red Dot, and it came supplied in a neat protective box, along with rubber lens caps, a honeycomb sunshade, Allen key, lens cloth, adjustment tool, and battery. 1 x means no magnification, and the 20 relates to the objective lens measured in mm.

Pick this sight up, and it just feels very well made, with high quality aluminium used in its construction. Integrated mounts are part of the design, and whilst my test sight was sent through with a Weaver rail compatible base, there is also a version available to fit 9-11mm dovetail rails. At less than three inches in length, it’s a mini marvel, and that ultracompactness does make it suitable for a host of pistols and rifles, where the addition of a larger sight may be impractical, or just ruin the balance.

I happened to have one of the new Air Arms S510 TDR R rifles in for review at the time of this test, and with the quick addition of Hawke’s own adaptor rail clamped into place, the Vantage could be bolted on in seconds utilising its Weaver base. The TDR is of course an ideal candidate, and this combination instantly felt right.

Onto the test range, and time to zero. Turrets are low profile with screw caps here, but clever design means the ridge in the caps can be used to adjust the turrets. Click values are 1MOA, which equates to approximately ¼-inch at 25-yards. The red dot size is 3 MOA, so roughly ¾-inch at 25-yards, and with 11 brightness levels from which to choose, via the side mounted Rheostat control, all conditions are catered for. Despite being non magnifying, the unit still incorporates 25 layer multi coated optics for maximum clarity, and the precision of the dot is impressive. Fast target acquisition is part of the deal, so a direct ‘point and shoot’routine soon takes over.

Read the instructions, and it advises the obvious, that a brighter level should be selected for daytime, yet, on test, I found level 5 to be perfect, offering a crisp, clearly defined dot, yet not over bright. Obviously, battery strength may dictate selection further on, and the type of target viewed can also influence brightness levels required. I chose a target with an inner dot which I guessed would be more easily defined at distance, as I really wanted to see what sort of performance was possible. To be honest, I’m always amazed at just how accurate you can be with a red dot system, as that rather more simplified approach, and in this case, a non-magnified sight picture, always sounds like a big disadvantage over a normal scope. Wrong again! Over my 38-yard range, and with a slowed deliberate aim, I managed groups easily coverable with a 10 pence piece. Pretty damn good, and very satisfying. Keeping the dot centralized within the viewing window is of course the key, although a session of deliberately sighting with the dot off centre in each direction still resulted in a two-inch group- proving that there is plenty of flexibility built in. It did cross my mind that some form of dedicated timed competition using red dot sights could be great fun too, so maybe something to be arranged further down the line

All pretty impressive but are there any negatives? Well nothing major. It would be nice to have alternate off stages between the brightness levels on the rheostat dial, rather than having to twist back through each stage, but hardly a major downer. Having to remember to switch off illumination is perhaps the biggest downside with this type of sight, and anyone who has picked up their sight, only to find a dead battery the next day (I can’t be the only one) will know what I mean. In use though, this sight really does add a new dimension to your shooting.

Hawke offer a two-year warranty with this model, and all the usual guarantees, such as nitrogen purged, water, shock, and fog proofing are here. So, at £69 all in, it’s hard to fault this Hawke Vantage Red Dot. A bit of a bargain, and an awful lot of fun!