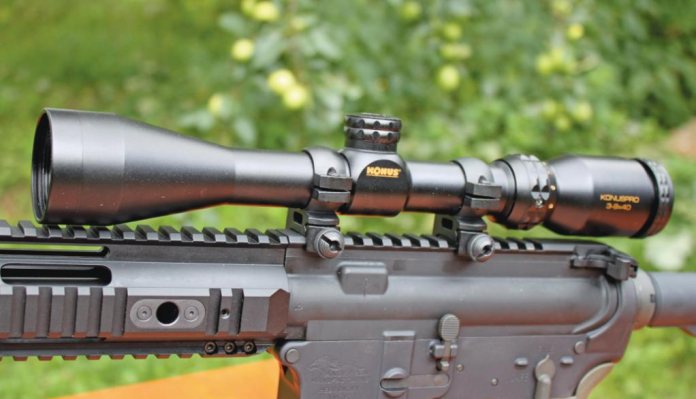 Konus scopes may not be a name you have heard of much before, which is a real shame. They started in 1979 in Italy with a clear vision of giving shooters real quality at a very competitive price. I’ve been itching to try out their scopes for a quite a while and I managed to get hold of two of their firearms scopes.

Both came with a 1” body tube and in 3-9x40 spec. From the outset, the Pro 550 and Pro 275 are serious scopes. What impressed me straight off of the bat was the fact that they have etched on glass reticles. They are firearms scopes and making them to that specification ensures they are robust enough to take the punishment. The reticle will never snap or break, even using .50 calibre muzzle loaders.

The surface finish on the scopes is deep brushed black. Two raised rings around the scope caps are matched on the variable magnification zoom ring and the eye bell adjustment.

The scopes are not just about aesthetics, the 275 as mentioned is designed for muzzleloaders and the model number relates to 275 yards. That’s the range out to which the reticle can be used with a .50 calibre muzzle loading rifle.

The reticle has nine lines, a short hash line above the main full-length reticle. Then three longer lines interspaced with four shorter marks. This ladder-type reticle makes the whole process of accurately hitting what you are aiming at much easier. With a 100 yard zero on the main reticle, the short line above gives you 75 yards. Each line below then comes in at 125,150, 175, 200, 225 and the final smaller line is the 275 yard aiming mark. It’s not just muzzle loaders that have found the 275 useful, many buy the scope for shotgun slug hunting and target shooting. I shot the 275 on a .22 rimfire AR platform, not at long range admittedly, but it gave me a feel for the scope. The parallax is set at 100 yards so it is aimed at black powder and 12-gauge slug hunting. The designed ballistics are set when the scope is on maximum magnification (9x). You can take it down to it’s minimum of 3x as I did for my 25m range. It’s a second focal plane (SFP) scope so the 275 yard drops etc. will not work on any other mag than max.

The Konus Pro 550 sent by Range Right Ltd looks similar but the model I got is the illuminated reticle version. It has centre dot illumination in either bright red or blue, with the latter being a better colour in some applications. Both colours have five brightness settings, with power coming from a single CR2032 three-volt battery. This is housed in the control turret on the left-hand side of the scope’s saddle.

The 550 shows a ballistic reticle set for maximum magnification (9x) and although it may look similar at first glance, it has an additional hash mark on the bottom section of the ret.

Both the 275 and 550 reticles have aiming marks for windage. Two short vertical lines on either side of the main crosshair and then, of course, the start of the thick post. On the 550 these marks are set for 10 mph wind increases when using 55-grain bullets. It’s another very useful shooter friendly element to the Konus reticle.

Both scopes share the same windage and elevation adjustments. Click values are set to move the point of impact by ¼” per one click at 100 yards, with a choice of a finger bar or coin slot for easy adjustments.

Konus scopes are real value for money and I for one will be joining their ranks of users that’s for sure. They already have a lot of fans all over the world, their manuals come in eight languages, English, Spanish, Italian, German, French, Dutch, Portuguese and Greek.

You don’t have to have a .223 or a .50 calibre black powder rifle to use these two scopes. The drops on the reticles work with a wide range of popular calibres, with the 275 proving popular in the States with .22 rimfire shooters. Gone are the days of 30/30 reticles, thank goodness, and the Konus Pro 275 and 550 embrace the new age of shooting aids. Thanks to Gill for help with the production of this article.