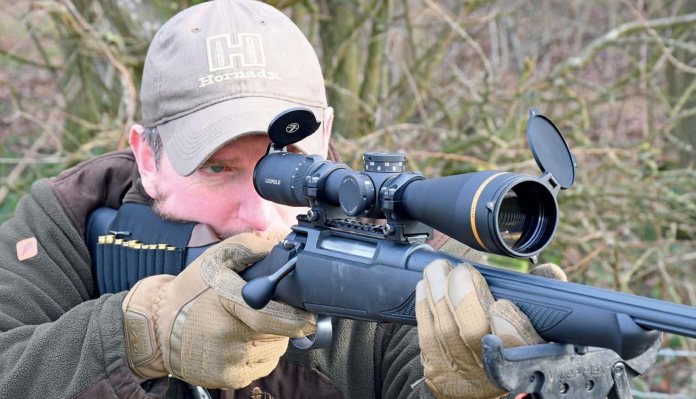 Leupold’s premium VX-6HD range of sporting scopes show trustworthy core mechanics and optics. They utilise a 6x zoom range with magnification here from 3-18, paired to a 50mm objective lens. This optimises available light entry into the optic without becoming overly bulky on a hunting-oriented rifle. The 30mm main tube makes mount selection easy and the 10mm click value at 100m is a sure nod to the metric among us. The scope is also available with ¼ MOA clicks. Both lenses are capped with bespoke aluminium flip-up covers that can be rotated to a specific position and silently fold back for the least amount of external disruption.

It seems no premium scope is at home without some kind of dialling capability these days and with the concept of ‘long range’ merging. Leupold has delivered an especially nice turret design. The low profile Zero Lock CDS (Custom Dial System) shows serration around their circumference for grip with or without gloves on, but little chance of accidental movement.

Both windage and elevation turrets have a silver/grey button that locks the unit at its centre-left/right or zero stop, let’s say 100m for elevation. It is tactile with gloves and needs just a light press to unlock. Windage is marked left and right of centre but the hidden gem is the elevation turret’s two turns of ‘up’ available. The clever part is the release catch sits flush in the first turn and then withdraws deeper for the second turn, so you always know at a moment’s glance where you are in the travel range beyond zero.

Once the scope is set up and zeroed on the rifle, a small Allen key loosens the outer dial cap to spin easily without clicks, to the zero point mark, on clearly engraved markers displaying click numbers, rather than the Milliradian unit they also accordingly denote. This is unusual because most metric scopes with 10mm clicks (0.1 mRad) are marked in the latter unit for long range and precision ballistics software readouts. Whereas hunting kit, like rangefinding binoculars with internal ballistics, display long range correction in number of clicks. Functionally, both are identical internal mechanical movements but actually, for short to mid-range hunting use, I rather liked the simplification. Even if it is just a notional factor for those more easily perceiving 1.7 mRad being equal to 17 - 1cm clicks.

The CDS dial system has lower and upper numbering that identifies the continuation into the second turn. After a few trials, it’s pretty hard to make any kind of mistakes, especially in poor light where clicks are still audible and tactile with no overrun. If you do happen to lift the elevation dial off, you can see the underside track that controls the locking button and zero stop in one function. A neat design I rather liked, with 80 clicks/8.0 mRad per turn for elevation with 4.0 in either direction for windage. Custom engraving can be specified to suit your rifle if required and having no need to disassemble a turret to set it up is always beneficial, with reduced likelihood of losing anything.

Durability wise, each scope is assured to pass 5000 recoil cycles on a .308. This sounds a lot, and is probably about the estimated barrel life of the rifle, although some shoot many more.

One great step onward for Leupold is the stable eye relief, showing just 3mm variation through the magnification range. This is allied to crisp fast focus reticle set up in the second focal plane.

The ZL2 reticle fitted here is quite a delight, as although fine (and my eyes are weakening with age), it is sharp black and solid in focus. There is a floating illuminated centre Fire Dot for greater definition in poor light or complicating foliage. The intensity is controlled by a push-button on the left side parallax dial and shows auto-off when laid on its side, yet not with the gun positioned vertically, which I found slightly unusual. The usual marketing terminology is coupled to low light performance but from my perspective, I found the image bright and sharp with a true flat field of view right out to the edges. The image had subtlety in its character with no internal reflections or flare. The ‘fire dot’ was delightfully subdued and controllably visible without distracting sparkle. It allowed for precision shot placement on small targets.

At 3x magnification, the scope provided a great field of view for close engagements and with a well scaled 18x max power, it’s nice to see an optic with such a well-balanced specification.

The matte black anodised surface finish was smooth and did not collect skin dust. I found the VX-6HD a pleasure to use, with understated externals concealing an innovative technical nature within. The scope is light and complemented the various test rifles it was fitted to. It showed particularly fast and cooperative longer range dialling capability paired to a set of Leica HD-B RF binoculars that display correction in clicks rather than units. It might just be a split second to those for whom it’s already split-second behaviour, but I liked the turret engraving (anti-clockwise for up/right) markings. They keep things just a fraction visually simpler in hunting scenarios rather than long range target or tactical use.

Eye relief was well specified for likely recoil and although slightly over specified for the Merkel K3, the 33mm up front and 66mm tube space to the rear of the saddle, made mounting with correct eye relief on a conventionally proportioned Sauer bolt action rifle easy.

The zoom collar was easily gripped, with smooth rotation and no perception of internal mechanisms in motion or hard stops at either end of travel. Likewise, the left side parallax control was backlash free with simultaneous focal correction.

A refined scope from Leupold with first-rate optics, functions and ergonomics to perfectly blend hunting and longer-range dialling capability.