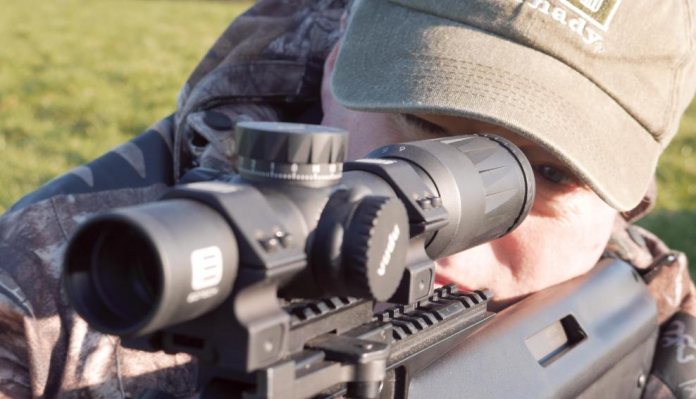 EOTech are famous as leaders in the world of holographic sights for military and sporting use, but in 2017 they introduced a new line of conventional riflescopes called the Vudu series.

All feature illuminated reticles in the first focal plane (FFP) and XC High-Density (HD) glass. There’s a fast-focus eyepiece, along with a throw lever for the zoom ring that radically increases the speed of operation. Models: 1-6x24 and 2.5-10x44 (30mm body tube), 3.5-18x50 (34mm) and the 5-25x50mm Super Short with push/pull locking for the elevation and EZ Chek zero stop.

On test is the 1-6x24. It makes a good impression with type-III anodised scratch-resistant, non-reflective black finish, sharp white markings and stylishly oblique grip surfaces. The build is compact with a 6x zoom factor and a true 1X magnification, so at that setting doubles as a red dot, which is preferable to fitting a separate item. FFP reticles can be an issue, as to what you see at a given magnification, with the reticle often being far too small at low power, and or too thick at maximum magnification. Saying that, EOTech seems to have it sorted.

Its Speed Ring reticle has a 65 MOA outer ring with short external stadia at 3, 6, 9 and 12 o’clock, and a super-fine central dot. The former lets you instinctively frame the target, and the latter refines your point of aim. The outer occupies the right amount of space at 1x, and a central floating cross that fulfils the function of the original central dot. At 6x, the outer disappears, and the central cross, which was entirely visible but barely defined at 1x, reveals itself as a fully-formed reticle, complete with five hash-marks on each axis, each subtending 1 milliradian, and a fine central dot.

So now you have a reticle that gives you just what you need to hold over/off and correct for fall of shot. Meanwhile, if your cartridge of choice is 5.56 or 7.62 NATO, and you’re happy working in MOA (MRAD versions aren’t available) you can opt for an SR2 or SR3 BDC reticle. These have an illuminated circledot pattern at the centre of the outer circle, with horizontal stadia for drops at 400m, 500m, and 600m below it and two vertical stadia either side for lead/wind.

I think Eotech have got the reticle thickness on the SR1 about right too. It’s possibly a little thick at the top end, but you don’t buy a compact 1-6x24 for long-range precision. This little Vudu does everything it was designed to do.

Illumination uses a single CR2032 cell in the L/H rheostat drum. Battery life is a nominal 500-hours at medium brightness, with a 2-hour autoshut- off function! Controls are different with three, rubberised buttons on the front, back and top of the drum. A single press of the top turns it ON, whilst each press of the front or rear button nudges the brightness down or up, respectively. The scope returns to the last setting used when switched back on, too.

Eye relief scarcely changes from 1x to 6x, and the exit pupil, which is a tightish 4mm at 6x, opens out to a generous 11.4mm at 1x, making for fast target acquisition at low magnification. EOTech quote ± 14.5 MRADs (± 50 MOA) in both the vertical and horizontal planes, but the test scope gave ± 17 MRADs in each. Both turrets offer a comfortable 15 MRADs per turn, with elevation numbered from 0-15 and the windage dial running up to seven on each side of 0, and both turrets feature indicator lines, so you can see at a glance which turn you’re on.

In real-world terms, my Strelok ballistic app says, with a 168-grain SMK from a .308, I’d get to 1090m before I ran out of elevation, and a further 1000m before the windage bottomed out in a full-value 10m/s crosswind. I’d say that’s more than enough for a 1-6x24! Clicks values are 0.5 MOA (1/2-inch at 100-yards) or 0.2 MRADs (2cm at 100m). This is a little coarse but typical of scopes in this format, where speed of adjustment counts more. The clicks are audible and tactical, and there’s no backlash, so dialling in is assured and precise.

You might expect a few more bells and whistles on a scope in this price range, but that’s your lot. There’s no locking system, no zero-stop, no tactile turn indicators and no turret caps. Which may be a good thing, zeroed at 50m and the dial set to 0, you can run the .308 load out to almost 600m on the reticle alone. If more precision is required, then just dial in, with all reasonable adjustments being supplied by a single turn.

However, many will see this sort of specification for short range use only and even for 22 military look-a-like rimfire semiautos. And at just shy of £1500 you could buy an awful lot of ‘big’ scope for the money.