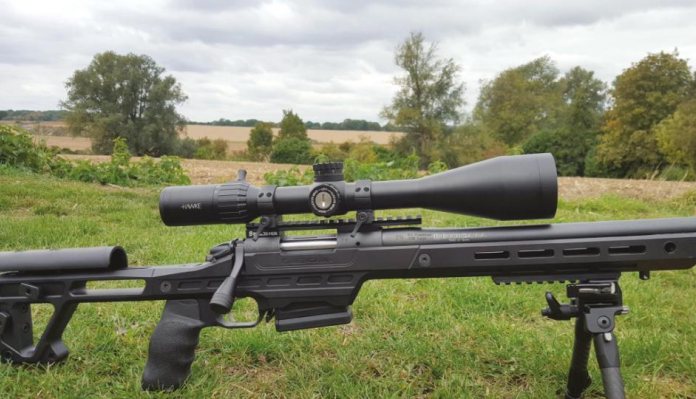 Hawke has a reputation for offering a large selection of optics, which cover many price points and build options, so that there is something for everyone. These include models for airgunners and rimfire and centrefire firearms users and covers disciplines that include plinking, target shooting and hunting. However, within their Frontier range they have now added some long-range shooting and hunting scopes to their portfolio including the model on test, the FFP 5-25x56 SF.

There are two models available in the FFP range, (first focal plane reticle) the 3-15x50 and the top end 5-25x56. Both use Hawke’s 21-layer fully multi-coated, index-matched lenses with the latter offering a 5x zoom range, making it the clear choice for longer-range shooting. It has an aluminium, 30mm main tube, a 56mm objective lens and comes in a standard matt black finish. It measures 15.6” long and weighs 817 grams, which, when compared to scopes of similar spec, is quite light. Additionally, it has a 4” eye relief, making it suitable for high recoiling rifles and also includes an illuminated reticle powered by a CR2032 battery. Brightness is controlled via a 6-position rheostat positioned on the end of the windage turret, a nice touch, allowing the easy attachment of a night vision add-on to the eye piece. The side focus parallax is marked from a quite short 20m out to infinity (∞).

There is only one reticle available, the FFP Mil Ext. A glass-etched design with red illumination, which was specifically developed by Hawke for their FFP range. It is an uncluttered design and generous in its proportions, offering 10 Mils of holdover and a total of seven in each direction for windage. The spacing of the hashes comes in 1, 0.5 and also 0.2 Mil increments, which appear at each end of the horizontal axis. Above the centre, there are 5 mils, which leaves enough room at the top of the field of view for a clear observation space. There are also some smaller measurements throughout the reticle if needed.

The fast focus eye bell is smooth in operation; however, it does not have any markings to reference its position. The magnification ring is metal, and its setup allows the entire range of movement to be covered in 90°. I was pleased to find that a detachable throw lever is provided, which adds extra leverage and speed for dialling up. It is 1.5cm long and, if needed, simply screws into the raised lug section of the ring. The parallax adjustment, although initially stiff, was smooth to operate and marked at regular intervals, which was useful for reference. The rheostat was easy to use and included OFF settings between each brightness level, so you can select a setting then dial back one and, when required, click onto it.

The elevation turret is a tactical/ target-type, which pulls up to rotate and pushes down to lock. The book states 15 Mils of internal adjustment whereas I had 16 in 0.1 increments and the clicks are tactile and quiet. With 6 Mils per rotation, there are just under three in total. All the markings are clear to read and well-spaced, including direction indicators, always useful! Unfortunately, there are none to indicate which rotation the turret is on after an adjustment. Zeroing is easy, simply lock it in position by pushing it down, undo the securing screw using a coin then lift the drum off and re-position it at 0. There is no zero stop, so it is important to remember what inputs have been made. The windage turret is of the same design and also offers 15 Mils of internal adjustment in the same increments, though is marked from 0-3 Mils in both directions.

On the range, it was immediately apparent that the glass was of a good quality, offering a clear and bright picture with good definition. The eye box was not too fussy and the image quality and scale of the reticle worked well throughout the magnification range with 8 Mils of holdover in view at just under 25x magnification. Illumination was red only and lit up the entire pattern, which has its pro’s and con’s but overall it worked well once the daylight started to go. Zeroing was easy and, once done, I shot at targets from 100 to 380m, making multiple adjustments on the turrets and the scope tracked well. I was pleased that I could use the whole magnification range, without the eye relief changing and often found myself making the most of 20-25x mag. When setting up, I found that the long eye relief does mean that if it is used with a rifle with a short length of pull, it may have to be positioned further forwards, so take that into consideration when selecting mounting options.

Hawke have clearly aimed this optic at the long-range hunter and target shooter, and it will certainly fulfil that role well. They have taken note of small but important details by adding a detachable throw lever and OFF positions on the rheostat drum. The reticle is well thought out and the glass represents great quality for the price. These factors make this scope a pleasure to use, it’s just a shame that they did not add turn indication markings to the turrets or zero stop, which when combined can makes it difficult to keep track of adjustments. Saying that, just 6 Mils of adjustment gets my .223 out to just shy of 700m! At £599.99, the Frontier FFP 5-25x56 SF is great value for money and well worth a look.