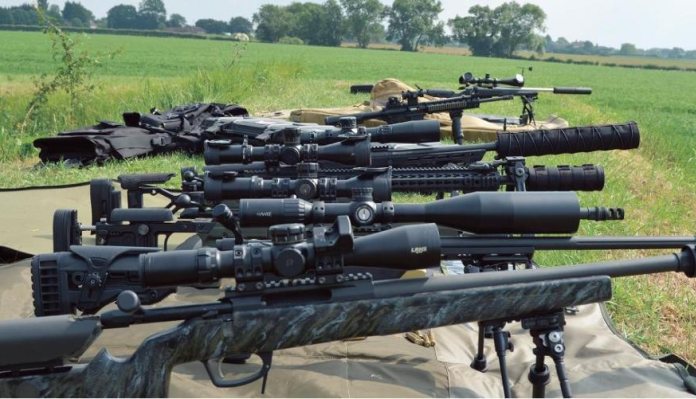 The technology used in the design and manufacture of modern rifles and ammunition is improving constantly, allowing for accurate shooting at greater distances than ever before.

It is of no surprise that the requirements sought after in a riflescope are increasing as well, but so are the prices. People have always turned to Schmidt & Bender (S&B), Nightforce, Vortex etc. but what about IOR? They offer great specification and some consider them as the dark horse of the optics world. I wanted to see what this brand had to offer.

The IOR Crusader sits at the top of the product range and, straight out of the box, it makes an impression; it is a big scope with big turrets and a fat tube! For me, this immediately cements its place as an optic to be used from a fixed position and with a support; there is no illusion as to what this scope is designed for and that is long range shooting. It has a high-quality finish and comes across as a well-made, serious bit of kit with solid controls that inspire confidence. It measures in at 16-inch long with a substantial 40mm tube, a hefty weight of 1270-grams and a 56mm objective; so, I expected some impressive specs and the Crusader does not disappoint. It boasts an impressive 5.8- 40 x magnification range, a decent field of view and parallax correction of 7m to infinity.

Starting from the rear, there is a fast-focus eye piece with a healthy dioptric compensation adjustment range of -3 to +3 diopters, which is critical on a scope of this type. The magnification ring is knurled, with a raised fin at the 16x mag mark with very regular markings on the ring from 4.8-40 x. The position of the parallax adjustment will almost certainly split opinion, it consists of a knurled ring that rotates around the main tube positioned in front of the turrets. This, I found, comes with pros and cons. Being up front, the ring and markings are not visible from a prone firing position and can also prove slightly uncomfortable to adjust over a period of time. The ring on my brand-new test scope was pretty stiff and, if it were mine, I would look into getting a throw lever for it. On the flip side, research suggests that this position may allow a beneficial internal design, giving advantages elsewhere. Either way, the parallax allowed very fine adjustments, giving me a very good sight picture; so, I guess the trade-off between its position and performance is down to the individual.

The turrets take centre stage, especially the elevation turret; its large size means that it can accommodate a few luxuries for long-range shooting. These include 10-Mils per rotation with well-spaced markings, click values of 0.1 mrad and a total of 29-Mils of internal adjustment. So, combined with 10, 20 or 30 moa rail/base, will meet the requirements of all but the most extreme long-range shooters.

The windage turret is smaller and features colourcoded ‘white for right’ and ‘red for left’, offering up 7-Mils of adjustment each way. The design of the turrets incorporates an excellent take on the keep it simple stupid (KISS) approach to the need to zero them. The mil markings are actually on a removable collar (you can order .50BMG or .338 specific rings if you want) and, once the small Allen screws are loosened, the ring can be freely rotated to the exact position of zero. This gets around the common problem on other scopes, of not being able to exactly line up the zero mark. The position and colour of the screws was not as aesthetically pleasing as I hoped but that’s a minor gripe.

Interestingly, there is also another collar, which interacts with the turret markings, controlled via a finger tab. This allows the user to mark a second zero, which could be useful for shooters moving between two ammunition types.

The reticle is a MIL/MIL design, for use in conjunction with the turrets. It is in the first focal plane (FFP) meaning that the reticle values remain the same throughout the magnification range. It features a well thought out 0.1-Mil floating illuminated dot in the centre, controlled by an 11-position rheostat on the side of the scope. The reticle has evenly-spaced marks on the horizontal and vertical axis, with every five mils being marked.

This is combined with a windage correction grid underneath, making it a very practical long-range reticle overall. To complement it, IOR use low dispersion HD German Schott glass, which, without a doubt, gives this scope optical quality on the same level as the big Europeans, like S&B.

Out on the range

I had the opportunity to test this scope for a while and also to compare optical performance, build quality, controls etc. directly to quite a selection of scopes, including S&B PMII, Nightforce NXS, Bushnell Elite DMR and XRS.

The combination of the Schott glass and the 40mm tube was eye-opening, offering a huge sight picture, great contrast and colours with maybe the slightest brown twinge compared to the S&B. Things got really impressive when I used the entire magnification range from 5.8-40x, as the scope held a full sight picture with very good edge to edge clarity all the way though. Importantly, there was no tunnelling, which is where a lot of hi-mag scopes fall down.

In my experience, scopes with a large magnification range usually come with some drawbacks, which makes them tricky to use effectively. Most people, including myself, are unlikely to use more than 26x mag, as the eye box becomes fussy and the ability to get a decent sight picture gets difficult, especially when the firing position is less than perfect.

However, once I had set up the adjustable stock on my rifle to give me the optimal eye relief and head position, I am pleased to report that optical clarity was definitely there, all the way to 40x, making it useful under suitable conditions. It is worth noting that normally, once the diopter is adjusted on a scope, it is left alone; however, I noticed that the Crusader seemed to appreciate adjustment in conjunction with the parallax to get the best image, especially as I moved above 26x. This could be seen as fiddly, but the scope was capable of giving me a great image with the correct adjustments, thus making the most of what it has to offer.

Zeroing the scope and resetting the turrets was easily done in the field. During use, the turrets were weighted well with tactile clicks. I tested the tracking on paper and on steel targets at a variety of distances and it functioned flawlessly with no discernible error at all! The reticle was excellent and did everything that I needed; however, in use, the illuminated centre dot was not visible during daylight, not a huge deal but it would have been nice.

Choosing a scope for your individual needs is challenging, with lots of factors to consider such as price, brand, magnification, adjustment range, glass quality and reputation. When spending over £2000 on a scope, it takes a lot to make a consumer stray from the mainstream brands but IOR have made a scope that cannot be ignored. Out of the very basic box, it is a large and heavy scope with the parallax adjustment in a strange place and some questionable aesthetics. However, in practical terms, these are irrelevant. In real terms, I found that the Crusader not only strongly contends with the top tier scope manufacturers in regards to performance but raises the bar with the standard features taken to the max, such as parallax from 7m to infinity and 29-Mils of internal elevation adjustment. These are then boosted with a great and fully usable magnification range, a 40mm tube and a competitive price.