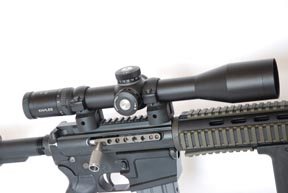 As a brand I like and use Kahles optics and have two of their scopes – a Helia CT 3-10 x 50 and a CSX 1.5-6x42 with automaticlight function. Both are for hunting and have stood up to a fair bit of global shooting with ease. So when importers Open Season Ltd sent me the more tactical and precision-oriented K312 I was intrigued as it was just that bit different.

Two things immediately strike you about the K312, the first being its large, 34mm body tube, which should really increase the range of available windage and elevation adjustments. Second, they have kept the spec sensible and practical, but with enough magnification to fulfil most needs. Often with this sort of optic the manufacturer can’t resist the urge to go crazy on the top end, with it sometimes being almost unusable due to the high mag on offer. But the Kahles goes from 3-12 with a 50mm objective, which results in an effective optic that even with its wider body is not gross.

Unsurprisingly the scope has its Mil-Dot reticule set in the 1st focal plane, which is the given thinking for tactical optics. However, other options are available – PLEX; pretty much a Dual-X and 4D; a ladder type with 10 cm subtensions on the 6 o’clock arm. Though I personally prefer 2nd focal, the real advantage is that you can range and shoot a target at any setting as opposed to having to stick with one, which is usually maximum magnification with a 2nd focal plane system. Simply put; if you have converted your drop and wind corrections to Milradian, which is what I tend to do, no matter what power you choose they will always remain true…

The downside of course is that the actual reticule and target increase and decreases in size as you dial in the magnification. So at X3 what you see can sometimes be an overly slim and fine cross hair that might be a bit indistinct. Conversely up at full mag the ret now looks like a fence post. However, I have to say that with its X3-12 spread the K312 manages to pull it off across the whole range. Down at X3, yes the cross is a lot slimmer, but individual Mil-Dots can be easily seen and used for ranging or hold over. Likewise up at X12 the cross hair is still fine enough to allow precise target placement. This rationalisation of the system, which I have also seen on the more modern Schmidt & Bender Zenith series does make 1st focal scopes a deal more attractive for the British sports shooter.

The reticule is your standard, 2nd generation Mil-Dot with four, round dots per inner arm and as I have come to expect from Kahles the view is crisp and tight right up to the edge. This is due to their AMV-Coatings (Achromatic Multi Coatings) that are optimized for maximum light transmission and perform 100% at dawn, dusk and midday. The objective is described as a “complex optical design” as it uses four lenses to create a distortion-free image with an extremely wide, field-of-view. Combine this with a fast-focus eyepiece and a side parallax drum and there’s no problem keeping it all sharp at any distance.

Now let’s turn our attention to the saddle and turrets, as Kahles have solved the problem of multiple turn adjustment in their own unique way. The elevation drum does not rise when it’s turned, so unlike a more sporting scope it does not reveal the fixed section with horizontal lines on it to indicate where you are. Instead they have what they term as a “reticule placement indicator”. The centre of the turret is dished-in and as you rotate it a pin rises from the middle, this is marked in red and light green stripes (five in all) that coincide with the five, full rotations available. This can be seen in day time and Kahles tell us felt at night, though how you work out the exact height in darkness must be some neat trick… But I suppose it’s better than not being able to see the aforementioned lines on the fixed section of the drum. This function is for elevation only as the windage turret does not offer it.

Click values are 1/8 MOA @ 100 yards, which is fine but precise. The turrets are big, easy to manipulate and clearly marked with an arrow as to direction – clockwise being up or H (hoch) in Austrian and windage being the more universal R (right) and again clockwise.

Elevation is divided in 17.5 sections, sub-divided in eight (1/8-MOA)and then four accordingly (for the final ½-MOA section) which gives 140-clicks per turn. A little odd is the fact that here the markings only go up to 16. Elevation gives 5-rotations and windage 2.5 or 87.5 MOA (elevation) and 43.75 MOA (windage) @ 100 yards accordingly.

Elevation, as you might expect is an ascending value from 0 – 16, with windage being split 0 – 8 in either direction, which is just that bit easier for laying in a horizontal correction. Turret movement is precise with good audible clicks and though firm, offers a smooth enough feel to dial in individual clicks with ease.

The side focus/parallax drum again is large and well marked and starts at 30, then 50 and progresses in increments of 50 all the way up to 800 then ∞. This is most practical and also better than other systems that don’t seem to be so logical about range markings.

I fitted the K312 to my SGC Speedmaster custom in 223 Rem, which is where this sort of glass should be along with precision-type bolt-actions. For the Practical Rifle shooter this represents probably as far as you need to go in terms of magnification and weight/length. Down at X3 or 4 the reticule though slim can still be seen against the target and the rifle used unsupported. As the range increases dialling up to maximum (X12) shows a slightly larger cross, which is still very useable.

For the precision shooter the ability to dial in 1/8th MOA clicks is nice to fine tune the range and windage settings. What probably strikes you most is the clarity and precision of the image on offer. Though no hunting scope, the dawn and dusk performance was superb! The weight at 28oz (2.2 lbs with mounts) is perhaps a little heavy and the overall length at 15.2” is not that short either. However, for prone-type use this is no real impediment.

Overall I was most impressed with the Kahles K312 3-12x50, as it shows all the quality of build, optics and innovation I have come to expect from this company. OK it’s more a tactical/precision optic, though I do have plans to take it hunting… All you now need to do is source a good set of 34mm mounts to suit.