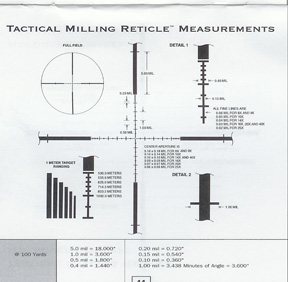 Selecting a scope can be problematic and in most cases it’s very much horses for courses. However, certain design features do have applications for both range and hunting use; one such in my opinion is Mil-Dot. Not, I hasten to add, primarily for its range finding abilities, but for the fact you can convert all your ballistic data (bullet drop/wind drift) into milliradian notation. You also might feel that an illuminated reticule and target-type (hand dialling) turrets are also a good idea and maybe want some form of target focusing system too. This recipe is purely tactical, but as we shall see it does make for a highly versatile optic that will suit range use and the more technically orientated hunter too.

The scope in question is Leupold’s 4.5-14x50 LRT (Long Range Tactical) with M1 turrets and an illuminated TMR reticule. Pure long range shooters might find the top end magnification a bit on the low side, but I find it more than enough to go out to 1000 yards and also as it can be wound down to x4.5 it will also suit the dictates of close fast shooting, as might be encountered in a Practical Rifle scenario, which can extended from 100 to 600 yards/metres. It is also good for Varminting, so the versatility of this model is fast becoming apparent.

So far I have tested the LRT on a 204 Ruger M77 Mk II VT, SGC Speedmaster straight-pull AR15 (223 Rem), 300 Win Mag Steyr SSG04 and 300 WSM Win Model 70. So in terms of application we have crows/foxes, target shooting/Practical Rifle and large game hunting. All of which benefit from its build and reticule configuration.

Leupold for many years have offered this 4.5-14x50 spec in a number of models and their early target version used a standard (5-dot) Mil-Dot reticule with their tall, capped target turrets in a 30mm body tube. The LRT takes this basic design and adds to it in a number of areas.

Externally the most obvious aspects of the design are the M1, direct-dialling turrets. Though un-capped they are waterproof, safe and secure yet dial easily and precisely, so once you have got your drop/drift data it can be applied as a firing solution to the target problem. Click values are ¼” @ 100 yards with the drums divided into 15-sections, each sub-divided into four, so every full revolution equals 15” @ 100 yards. Naturally there’s the usual vertical/ladder stadia at the 0 position that gives the user the elevation relationship of the turret. So even with multiple turns being required for large changes of elevation you know where you are and can return to zero. As you might expect the M1s can be set to 0 once they are zeroed by undoing a single lock screw and re-positioning the drum. Both turrets offer seven full turns of movement, which @ 100 yards translates to 105”. As a slight aside; the Leupold Custom shop can also offer dedicated BDC M1 turrets, cut to a specific cartridge and load for this model.

On the left of the saddle is the parallax (target focus drum). Leupold do not mark this with numbers; instead a series of reducing diameter dots go to infinity and I have always found the ability to get your target sharp and crisp, as well as your reticule, to be a bonus. The magnification ring is firm in operation with a raised lug to help dialling. The 11-position rheostat for the lit reticule sits at 10 o’clock on the eyepiece bell and though well positioned for use by the left hand it does tend to obstruct the manipulation of the mag ring a little. The illumination only extends to the central Mil-Dot section.

At the rear is a fast-focus (European) eyepiece, which I much prefer to the old lock ring style, and the LRT includes flip-up lens caps. Reasonably compact at 12 ¾” this is not a huge scope and its 50mm objective means it can be used in medium height mounts, so the whole package does not sit too far off the rifle.

So far the build is good and useful with the M1 turrets offering a practical and precise method of range/windage correction, given you have your data recorded in one manner or another. However, inside, the new TMR (Tactical Milling Reticule) offers an alternative system and one I personally prefer.

TMR is third generation Mil-Dot technology, in that Gen I used rugby ball shaped dots, Gen II used round dots and Gen III has done away with the dots completely in favour of hash lines. Personally I find this far easier and precise to work with, but it doesn’t stop there.

As before you have a generic, wide Dual-X reticule with the thin inner arms each showing 5 Mil-Dots. Each main hash line is 3.6” (one Mil-Dot) apart, as ever. However, on the first four each is further sub-divided into ½-mil too. The fifth is sub-divided into five (1/5-mil) and it’s plain to see that with both ½ and 1/5 subtensions available, you can get very precise on the measurements. To cope with larger targets the thicker/outer arms of the crosshair also show a hash line at 10-mil, though there's nothing in between this and the five mark. So we have a precise and practical measuring system.

Before going any further I do feel that Leupold have not perhaps thought this through, as they’re missing the opportunity to offer a full 10-mil arm at 6 o’clock. If this were sub-divided into one and ½-mil from the centre to the 9th dot then 1/5th at 9 to 10 it would make the TMR far more versatile, much like the MP8 reticule as offered by IOR on their tactical scopes, though they only go down to ½-mil subtensions.

I say this as most sports shooters do not use Mil-Dot for range finding and even though I know what to do, neither do I. Instead I convert all my drop/wind data into milliradian corrections, which for calibres like 223 Remington is useful as on average drop at 600 yards requires between 7 and 8-mils compensation. And this would also be useful for 308 Win etc when shooting out to 1000 yards. This is simplified and written on my scope cap from my zero range out to maximum distance in 25-yard increments. For hunting this would be 100 to 400 yards; for range work I only have to go between 100 yard increments, unless of course on a field firing range.

So as can be seen you have the versatility of either dialling in the correction, which is good for multiple shots at one distance, or making a quick, visual Mil-Dot adjustment at unknown ranges for all requirements. Good examples might be a 300 to 600 yard target ripple on an ETR range. Here you have to compensate for three distances with the targets falling when hit then popping up again. I commit my drops to memory, which is no big deal, then it’s just a matter of placing the correct hash mark or as near to as is required for each distance. For hunting it’s just a matter of getting the range to the deer then applying the Mil-Dot corrections that match it – faster and better than trying to work out a drop distance in inches then lay it on the animal to get the hold over, as in effect every shot has an aiming mark, as opposed to a vague hold-over position.

Using TMR in this manner and with its ½-mil subtensions means I can get pretty precise hold over measurements, as guessing what’s ¼, 1/3 or ½ mil on a 1-mil subtension is not as precise as it is on a ½-mil subtension. All of the above can also be applied for wind compensation too, as once you have calculated your drift table; just turn it into mils and you have a precise system for laying off the target.

On the matter of subtensions and apart from the obvious 1, ½ and 1/5th mil-dot measurements, the reticule offers a number of other useful dimensions in terms of the width of the various arms of the reticule, etc. This is fully noted in the instruction booklet that comes with the scope. I have printed this out here so you can see what’s available.

Despite my negative comments on the lack of 0-10-mil subtensions on the 6 o’clock arm the Leupold 4.5-14x50 LRT M1 TMR illuminated has a lot going for it for both hunting and target use. Precise and versatile with two adjustments systems as well as an advanced range finding ability, this is the sort of scope that will suit any need for longer range work.

Leupold class this model as a tactical optic, so in the UK it’s only available through their tactical dealership (Riflecraft Ltd)