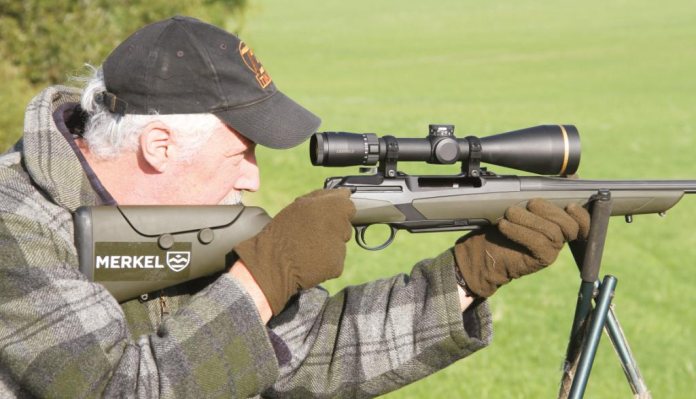 The Leupold VX 5HD 3-15 x 56mm CDS ZL2 is one of their new High Definition range, aimed to compete with European makes. It has a practical magnification range with Twilight Max HD Light Management System for low light and improved images, as well as CDS™ (Custom Dial System) which allows a quick-change elevation adjustment and Fire Dot illuminated reticule system. All in all, a sturdy, well-built and lightweight optic for its size and on a 30mm body tube.

This VX is 13.58” long and weights 21oz so compact, and the 30mm body tube offers a deal of turret adjustment. Measuring from the saddle you get 35mm of front and 70mm rear mounting length, so a bit tight up front. The 56mm objective lens aids light transmission and is threaded for a sunshade, which means higher mounts.

The magnification ring is smooth in operation and shows clear, white numbers and a small serrated edge and raised knob at the 7x setting. The reticle is in the second focal plane (SFP) and shows an uncomplicated Duplex pattern, with enough ‘meat’ on the outer arms to still be seen against foliage easily in low light.

The Fire Dot is a small, red, fibre dot to that is ‘lit’ when the button in the centre of the left hand parallax adjuster turret is pressed. One push turns it ON and subsequent presses increases brightness. It is clear, does not bleed too much at its highest setting and, more importantly, gives a good aiming point in dodgy lighting. The side focus is easy to operate in the shoulder and is marked from 30 yards to ∞, always a useful feature!

Turrets show a conventional capped windage layout, with the elevation drum being exposed and adjustable, Leupold calls their CDS system. Click values are the usual ¼ MOA adjustments with a full adjustment range of 75 (MOA) in both windage and elevation planes. The windage is marked in two MOA increments and has precise adjustment clicks in both directs with a 0/zero setting in the middle. Making it easier to dial in a given direction with confidence.

The elevation turret is really nice, as it uses an instantly accessible CDS system that from the box comes marked in MOA adjustments in the same two MOA increments from 0 to 18 MOA and then a second upper indicated marking ring from 19 to 37 MOA. However, and if it suits you, this can be removed and replaced with a custom etched version matched to your rifle/ ammunition ballistics from the Leupold custom shop. There’s also a push-button Zero Lock system that eliminates accidental dial movement with the elevation adjustment. This is a small inset grey button in the drum.

As far as optical quality goes, the new HD lens system offers a quoted 30 minutes more shooting time and 90% more elimination of glare to produce a high definition edge-to-edge clarity. I have to say these Twilight Max HD Light lenses do `up` Leopold’s game when compared to German or Austrian optics. You have well defined and bright images to the edge and yes, at low light you can see the improvement over my older Leupold VX3 scopes for sure. The exterior Guard-ion coating sheds dirt and water for clear, crisp images in all conditions. Couple to this the fact that you have an absolutely water and fog proof integrity to the VX-5HD scope means, like all Leopolds, it’s meant to be used and used hard. Out in the field, which I did!

One extra thing, is the 5HD has a system to extend battery life with its Motion Sensor Technology (MST) that automatically deactivates illumination after 5 minutes of inactivity and then reactivates instantly as soon as any movement is detected. Handy for my forgetful brain these days.

I mounted this scope to a Merkel Helix in 243 Win via some snazzy new, Finnish, OSUMA Q/D scope mounts, which proved to be very well made. Sighting in was easy with the CDS system and I needed very little adjustment when I mounted the scope. I turned the elevation and windage to increase and decrease the values and then check the shots returned to the original zero, which they did. I sighted in using some Norma 76-grain Tip Strike ammunition at 100 yards I had handy. Then it was off to a friend’s farm to sort out some troublesome Chinese Water Deer (CWD).

Early mornings are the norm for me after Roe, but actually these CWD were more active in the evening after the fields had received the maximum sun light to warm them up, so that they could bed down. Like many deer, they just seem to pop out of nowhere. At 300 yards, you could see clearly through the Leupold whilst rested off sticks and distinguish the bucks from the does with the 5HD set at max power of 15x.

We had shot quite a few nice bucks and large does in the past, so a smaller animal was preferred today and so a lone buck at 300 yards was selected. The fields on this farm have good deep ditches to sneak along, which we made good use of and, despite the wet and brambles, the Leupold shrugged them admirably. At 150 yards we stopped to look, still on course and after another soggy 75 yards we emerged from the ditch rested the Merkel on the Roe sack and dialled in the range and set the magnification to 8x and sent that Norma bullet on its way to a one shot kill. There is no better test than harvesting a deer, which proved to me the VX-5HD’s fitness for purpose.

Very impressed in a word, (well, two!) it’s a Leupold, you know its history and pedigree and the new 5HD scopes are good value for money and will probably out last their owners with that full lifetime guarantee. Clear and bright optics, accurate and repeatable adjustment with a fine fibre optic Fire dot illumination and sturdy construction without being too heavy, what more do you want?