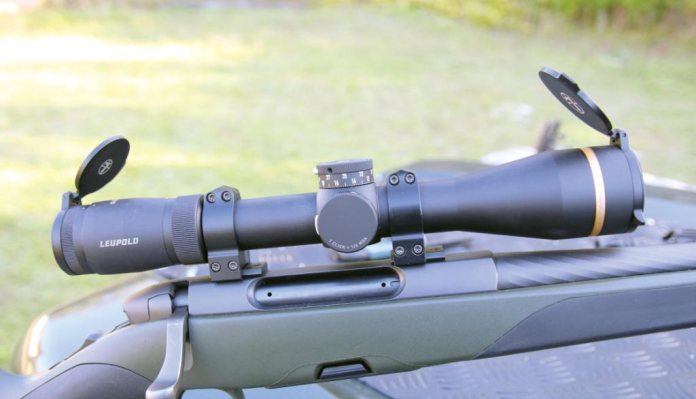 It’s been some time since I looked at a Leupold and I’m very pleased to say that the VX-6HD 2-12x42mm that was originally sent for my gun test on the Ruger Precision Rimfire has been put through its paces on full bores too.

What first struck me about this one, was its most practical specification for hunting, with its 6 x zoom range giving a versatile magnification of 2-12x on this model. Meaning up close with a wide field of view at 2x for close ranges and in the woods, then dialling out to 12x for longer shots and everything in between. The objective bell is 42mm on a 30mm body tube, so easy to fit to most rifles with low or medium mounts, and it lets plenty of light in too! Though I’m not a big fan of tactical-type turrets for hunting scopes, Leupold have created something rather special with their CDS-ZL2 elevation adjustment dials on both windage and elevation as standard. As we shall see, essentially, it’s a zero stop system with a manual button.

Also, on the spec sheet: the Twilight Max HD Light Management System combines exceptional light transmission, resolution and glare management to provide vivid, bright, high contrast images from dawn until dusk. MST (Motion Sensor Technology) automatically turns off illumination after 5 minutes of inactivity yet reactivates instantly as soon as any movement is detected. One button brightness control with a high/low indicator. The twin bias spring exerts up to 30% more holding force on the erector, virtually eliminating system backlash and stress on these vital internals. A generous eyebox, combined with longer eye relief offers versatile head, eye/scope alignment. Good edge-to-edge brightness, and a full clear sight picture that fills the view completely. It’s filled with an Argon/Krypton gas mix, which nearly eliminates the effects of thermal shock, and reduces the diffusion of gases sealed inside. A Guard-Ion lens coating is water, dirt and fingerprint shedding and extremely durable and scratch-resistant.

An impressive specifications list; so, let’s see what it’s got. Tipping the scale at a just over 1 lb and 13” long, this is not a big scope, which will suit many users. Finished in tough, matte black anodising, it shows the trade mark gold ring around the objective, indicating its all made in America, with numbers in white. The build shows a fast-focus eyepiece and a wide/grooved magnification ring with provision for an optional, reversible throw lever, which is included and a useful accessory. Extra, however, are Leupold’s Alumina lens caps, which are smart and practical.

Of most note are the turrets; low profile, they both show press-in locking buttons and are marked for elevation and windage accordingly. With ¼ MOA click values, they offer 20MOA per rotation and six full turns for zeroing; however, once set and the turrets re-fitted, you get two in elevation and one in windage, which is more than enough for most needs. They are removable by three Allen-headed grub screws in the rim; taking the drum off the elevation reveals the central shaft with slot for a screwdriver and a spiral track in the base. The pin on the inside of the locking lever engages with the track and after one revolution (0-20MOA) and the start of the second the button goes in, so indicating you are now going up from 20 – 38.5MOA. This is as far as it can go due to the end of the spiral, plus, you can quickly wind back to base zero where it locks.

Windage is the same, though only one turn as the drum is marked 0 for the middle with 8.5MOA in both directions with each number including an R or L (right/left) accordingly as to rotation. Set to its middle 0 position, the button is pressed and the drum free to dial and automatically locks when it’s set back to 0. To be honest, 8MOA either way is more than enough for most needs.

Leupold call their reticle a T-MOA, which builds on their Wind-Plex design. It’s a Dual-X, hash-type pattern in MOA with the inner cross having 10MOA on each arm with a taller 5MOA position for a quick register. Being in the second focal plane, you must set the magnification to 12x for true values, but it does offer elevation hold over and wind hold-off options as opposed to dialling them in. The former sometimes faster if you know your ballistic drops when you’re on a deer and have not got time to twiddle turrets.

Illumination is red-only and lights the inner MOA cross, which is fine. The rheostat is not your classic rotary drum but a rubber button on the battery housing left of the saddle, push to turn on and each subsequent push increases the intensity for six levels, then it flashes to indicate maximum. Repeat the process to go down the scale; it’s fast and simple and easy with gloves on. Leupold incorporates their MST (Motion Sensor Technology) which, automatically switches off after 5 minutes of inactivity, and turns back on when the rifle is moved.

Field use showed crisp and bright images and good light transmission, although Leupold don’t seem to quote that figure. Length and weight make it ideal for nearly any rifle, initially the reticle appeared to come up a bit fine, but further use showed it to be well proportioned for most distances, where you’d need to hold over. This model is not parallax adjustable and it’s set for 150-yards, which seems about right. The Guard-Ion coatings seemed to work and overall, it’s an impressive package.