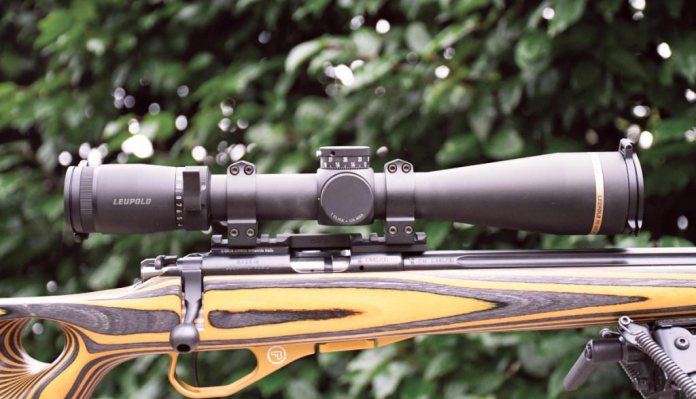 Leupold scopes hold few surprises on test, they have been around for a long time and continue to maintain a quality picture that rarely disappoints.

The VX-6 range carries optics for most users, yet I would categorise this 3-18x44 variant as one for the hunter, wanting to maximise capability over varied terrain, ranges and mixed quarry species whist retaining moderate dimensions and weight.

But, regardless of this, when Leupold make a modification or technological advancement, it is usually done very well.

The 350mm body starts out with fantastic magnetic Alumina fold back (fully flat) lens caps, with the front requiring just a minor flick to open it, the rear showing a modest push button to the lower left quadrant.

Both will rotate freely to suit your preferences and they instil an immediate feeling of quality and durability, protecting your expensive glass within.

Hard anodising on the T6061 aluminium, 30mm maintube is a little too matte and tends to draw the skin dust from your fingers but is tough and durable, so far shrugging off all minor scrapes and dings from foliage or other guns in the cabinet. The CDS dials for windage and elevation are the most striking visual characteristic with petite push buttons at zero setting location.

After initial zeroing, use the supplied Allen key to slacken the dial, rotate it to ‘zero’ and you are ready to go. Leupold were one of the first manufacturers to make scopes that tracked reliably, all assured by a lifetime guarantee. A light press unlocks the dial to spin 360-degrees, offering 20 M.O.A (80 1/4 clicks per turn) in elevation travel per turn with beautifully tactile, well-defined ¼ M.O.A. clicks giving up to 38 M.O.A. of travel through its twin turns.

The locking button remains flush into the second turn, so acts as a rotation indicator, as well as never interfering with the longer shots. The lateral windage turret locks at its centre zero position with 9 M.O.A. clearly marked left and right. Compact, secure, tactile and accurate, these are nice adjusters! Moving back toward the 6x zoom adjustment spanning 3-18x, you have the option of fitting Leupold’s supplied reversible throw lever. This clamps to the zoom control ring, locking onto the tactile indicator ‘bump’ half way through the range. The control turns clockwise to increase magnification, so at full zoom you have the extended lever quite close to the bolt handle on some rifles. Be aware of this at setup, even if it doesn’t catch the mechanics themselves, your soft fingers and thumb may well collide with it. It is reversible, to splay its ‘wing’ either upward or down, so you have options. It’s good to use, enabling fast magnification adjustment but with 180-degree arc of travel, and designed to suit either left or right-handed rifles, you can’t always have the perfect compromise for these things. I liked it but would prefer it shorter than its 1-inch (25mm) extension, I respect its limitations, good for targets, not for fast shots.

Leupold now thankfully have fast focus eyepieces to enable crisp reticle focus, it also doesn’t interfere with the freely rotating lens cap. I had the T-Moa reticle in the second focal plane, a simple crosshair with approximately half of the centre ‘Fire Dot’ illuminated and calibrated with hash marks corresponding to M.O.A. on full magnification. Make sure you stay aware of the altering reticle subtensions as the zoom is altered in this second focal plane optic. The side focus/parallax is numbered, presumably in yards from 50 to infinity. I got clear picture on full magnification down to about 35-yards, which as I was testing the scope on a 22 rimfire, became particularly handy for such a premium optic.

Illumination is initiated with a press to the centre control button within the backlash free side focus dial and six further presses increase the intensity in steps before it flashes at the brightest, before further presses bring it back down. A long hold extinguishes at any time and when re-initiated, it comes back at the same intensity. Most optics commonly show a two-year warranty on electronics but Leupold have gone a little further with five on the cards which is reassuring.

I specifically used the scope on a 22 rimfire, because I wanted to test multiple adjustments aggressively and get to know the scope and turrets to their maximum, I particularly enjoyed some extreme distance target shooting, which for this calibre, amounts to about 200-metres on steel targets for great fun.

I can take or leave the reversible throw lever, I caught my hand too many times operating the bolt, my personal choice I suppose and why Leupold make it a detachable feature. I found all adjustments accurate and really, really liked these turrets. The box contains details of getting your own free personalised ballistic dial cap suited to specific calibre but I’m happy to wrap in tape and mark off my ranges, I’m always changing ammo anyway. The simplicity of adjustment is appreciated and especially at the range or in the field, you don’t need to dismantle intricate mechanics with the risk of losing small parts, just to alter your setup for different ammo.

The glass gave me a nice sharp image, with clean resolution and focus but it’s not really at fault or to be blamed for comparatively dim performance in poor light conditions. In these days, where 50mm seems the norm, with 56mm hardly unusual for an objective lens, 44mm is at a simple cross-sectional area disadvantage for allowing light into the tube. I liked the reticle’s uncluttered visibility with the fold flat Illumina caps never getting in the way of offhand improvised shots, it’s also nice in this respect to see Leupold have lost the horrible eye relief variation shown between high and low magnification. Only 3mm variation from 94-97mm is present here and totally comfortable at that. Parallax was repeatable with no backlash and like all other discernible mechanics, gave smooth movement with no noticeable tight spots or noise from internal lens packages.

All the optical coatings carry the usual plethora of trademarked names, but the core facts are it was, and still is, fully waterproof, with a pressurised inert gas charge to avoid fogging. This time of year often sees rapid temperature changes in the UK and none gave any issues.

If I were to pick one thing I didn’t like on the scope, it was the anodising. For a company with the long-standing reputation like Leupold, who used to apply deep lustrous anodising to smoothly burnished aluminium surfaces, I was a tiny bit disappointed to see standards have changed. I’m fairly sure it is down to price and design specification rather than any quality control issues but on a premium brand such as this, I’d really prefer a £2k plus scope that didn’t remain coated with cloudy white skin dust from almost any contact, particularly where the continual abrasion with the hand operating the bolt is encountered.