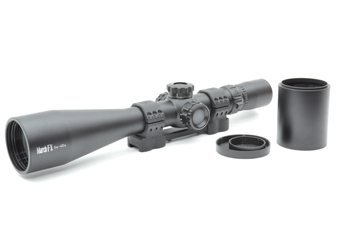 First Focal Plane (FFP) is the name designated to an optic where the reticule inhabits this specific zone in the system. What you see remains precisely relative in size to the image that it covers and any measuring that is done using markings on the reticle such as a Mil-Dot will read correctly at all levels of magnification. This format is popular for those gauging range by measuring an object of known size and originated from a
time where there was no such thing as a laser rangefinder.

If shooting at ranges where the bullet splash can be seen or a spotter can call your shots, aim-offs are also very fast and of course dialling in to tally is intuitive and fast as no thought is required; a mil is a mil, is a mil! The benefits are those listed above, the downsides are that careful reticule design is required to avoid obscuring the target at high magnification or losing sight of it when the zoom is wound down to provide a greater field of view. With the x8 erector tube shown here altering the reticle in size 8 times along with the image, the addition of an illumination function is a worthy benefit - if it is bright enough.

The build of this March scope follows their previously displayed lines of a 34mm, one-piece, aluminium maintube diminishing from a 56mm objective lens down to a 36mm ocular via a slim central saddle holding three turrets. Elevation and windage units are 0.05 Miliradian with 5-mils per rotation as part of 24 in total for elevation and 12 mils of windage. 0.05 mils is equivalent to 5mm at 100 metres.

The vernier-style turrets do not have a rotation indicator but elevation does feature a zero stop that can be screwed down to set your starting position. Windage is marked left and right and shares 0.05 and 0.1 mil markings, easily dialled using the gently knurled fingertip profiles with clicks that provide and excellent compromise between firm, without over-rotation.

Once zeroed, small Allen screws allow the markings on the turret to be set to zero for reference. The left hand parallax drum is marked from 10 yards (strange on a scope 100% metric elsewhere) to infinity although it won’t actually focus quite that closely. Focus snaps in and out with a solid appearance and backlash in the system is pleasantly non-existent.

This scope uses a soft rubber centre button on the Parallax drum to control illumination of the centre section of the reticle and, like other Marchs, four brightness settings are available along with OFF from 5 presses of the button which is quick and silent.

I really like this system but I would like a brighter setting to give a clearer view of the reticle (small in size) at low mag in daylight. There are two illumination modules available that are interchangeable offering different intensity levels so it may be I was using the dimmer of the two? The zoom ring is silent and smooth with crisply executed knurling, all settings are clearly marked although being FFP aren’t critical and the minimal lock ring on the non-fast focus eyepiece does not get in the way during operation.

The 92-100mm eye relief range is just right without any uncomfortable variation through zoom travel requiring head movement. I was delighted to find that unlike a 5-50 March scope I tested last year, the exit pupil here seemed generously forgiving, contrary to the x8 erector tube required for the 5-40x zoom ratios.

The FIML-1 reticle is a hovering inverted Christmas tree style showing 3 full mils and half mil increments in all directions at x40 zoom. This increases to 9 mils on the lower section at approximately x18 mag and as you descend to the minimum, the external stadia become fully visible in the field of view. These are gently tapered to lead the eye to the centre which at x5 is understandably small!

The scope came with a Third Eye Tactical Unimount allowing simple fitting onto my Weaver rail equipped rifle. Zeroing at 100m was easily accomplished and I’m really starting to grow fond of FFP reticles with both metric reticules and turrets as zeroing alone gives an immediate impression of the scope’s matching parameters whilst taking only a few shots to reach dead centre.

Eight rounds had it zeroed, a check on short range dialling via a box test and the fact that 10/20 clicks equalled the half and whole miliradian markings in the reticule along with perfect return to zero and tracking. I eagerly awaited a gap in the foul weather over the Christmas holidays to get to some competition or multi distance tactical shoots but had to limit myself to long range varmint shooting which although not formal in procedure, certainly gives the chance for a lot of dialling and perhaps most critically, stretches the optics towards darkness.

Primary testing gave a crystal clear picture of electrical power line insulators over two miles away and in use with parallax snapping distinctly in and out of focus. I was struck with the clarity on small targets requiring defined resolution at both high levels of magnification and long ranges.

Tested alongside top end European glass of similar magnification, I was somewhat astounded the detail the March would resolve where the competition felt stretched. However in low light the Euros had it! Do not underestimate me though, this Japanese glass from Deon optics has now got 99% of the way there, it is very, very good.

Needless to say edge to edge clarity was without question and colour rendition in these dim winter months was as defined as could be hoped for from any glass. It is one factor always open to discussion from the eyes of other shooter’s rods and cones though. The reticle remained pin sharp in any conditions and illumination never caused any light to flare back into my eyes, like the rest of the March range, weight was class leading at 905 gr.