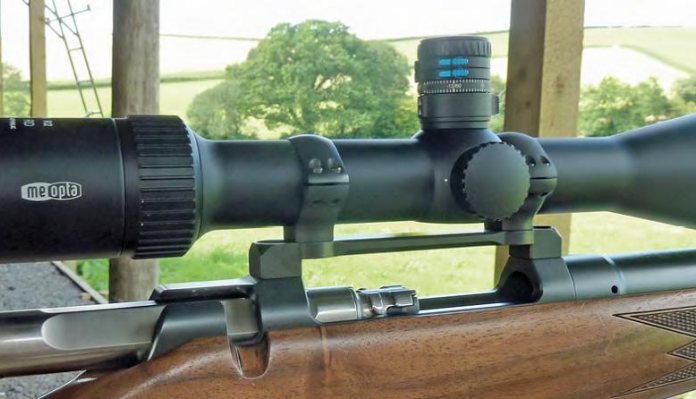 Meopta has been around since 1933 in Czechoslovakia, which is now the Czech Republic. They make all their products in house, including the grinding and polishing of their own lenses from Schott glass. They have never been a high profile company, who seem content to quietly go about their business without much fanfare.

Other optical manufactures, in contrast, have gone heavily into advertising, which is where some of the money goes when paying premium prices for their products. As the saying goes, there is no such thing as a free lunch; the consumer pays for everything! All Meopta scopes come with a 30 year transferrable warranty, which gives a good degree of confidence in their products.

Most scopes are well finished nowadays, this example being no exception, showing a smooth semi matt ELOX hard finish in black. There are low caps on the turrets, the 1/4 MOA (.7cm @ 100m) click adjustments underneath are firm and accurate, so zeroing the rifle was straightforward. Pressing the turret drum in against a spring disengages it, enabling the drum to be set back to zero/O position.

The zoom is smooth yet firm, with a good 90mm eye relief. At 2x there is a slight barrel distortion, noticeable if you move the scope across the straight lines of building for example, but zooming from 2 to 12x with the rifle in a vice shows there to be no change in zero and no tunneling effect either.

Colours are rendered clear, bright and with good contrast, 6.5mm bullet holes in the 100m target were visible from scope edge to edge, indicating no fall off in quality often found in cheaper scopes. The lenses all have the new MeoLux multi coating for excellent light transmission and also Meopta’s own hydrophobic layer, called Meodrop. This enables continued stalking in inclement weather, where water will ball tightly on a lens, instead of smearing and just roll off under its own weight.

The reticle is a German no.4 with red dot in the centre (Meopta’s 4C) in the second focal plane (SFP). Simple and very effective, it’s a little heavier than I’m used to. But at Braces range just outside Bristol, the groups I achieved at 200m were no larger than with the much finer reticle of my Swarovski, Z6 atop the same rifle. The red dot has eight brightness settings, operated by a rheostat drum wheel on the left of the saddle; half clicks between the settings are ‘OFF’, so easy to preset a brightness and standby, although no auto off option is available. There are far more brightness settings on other makes of scope, but who really needs all those? I found settings 3, 4 & 5 suitable for all scenarios from bright sun to dusk. A fast focus at the ocular end rounds off the controls.

An option, purchased separately if ever needed at around £150, is a ballistic turret, which simply screws in place after removing the standard elevation turret. I tried this at the range. It is well designed, enabling the set zero to be changed by lifting the body against a spring and turning. You can also go 10 clicks past the zero, a sub zero if you like, equivalent to a change of -7cm at 100m for closer range shooting if required.

The two further zero marker rings are also easily moved by depressing the blue buttons incorporated in each ring. Very simple and easy. By comparison the Swarovski ballistic turret has to be disassembled to make these changes. A downside is the lack of a locking ring, and the height of the turret at about 32mm. (Swarovski’s Z6 turret locks completely and is only some 19mm high). I would be a little concerned at taking the scope with this turret attached stalking, as it could be inadvertently moved before a swift shot, however the turret is surely aimed at range work or perhaps longer range varminting use.

Braces of Bristol kindly lent me an extra QD mount, so I was able to quickly swap between my Z6 2.5-15x44 and the Meopta on my Mauser M03, without fear of losing zero in the field. The Z6 is a well-regarded scope and so a good benchmark to use for comparison.

Through the gun shop window or outside in normal daylight is no place to evaluate optics, so I’ve taken both scopes out stalking and shot a few young fallow bucks with each in the last month. I also shot a muntjac using the Meopta, the wood floor was dark due to the thick tree canopy overhead in the early morning, but the reticle came into its own here. It was easy to keep the crosshairs on the small deer until it stopped long enough to get a neck shot off, no need for the red dot. This may well be my favourite hunting reticle!

With hand on heart I could not, at up to 10x magnification, tell one scope from the other at dusk, as both were as bright as each other. With 44 and 50mm objective lenses, it would be unfair to compare the two at maximum magnification. I would be happy to mount this Meopta permanently on my M03, but unfortunately it had to go back. Available at around £1000, it’s an extremely high quality optic, punching well above its price bracket.

Braces Shooting and Country Supplies,
Bristol, 0117 300 9956 for the loan of the scope (Meopta, Swarovski and Blaser retailers)
www.Bracesofbristol.com