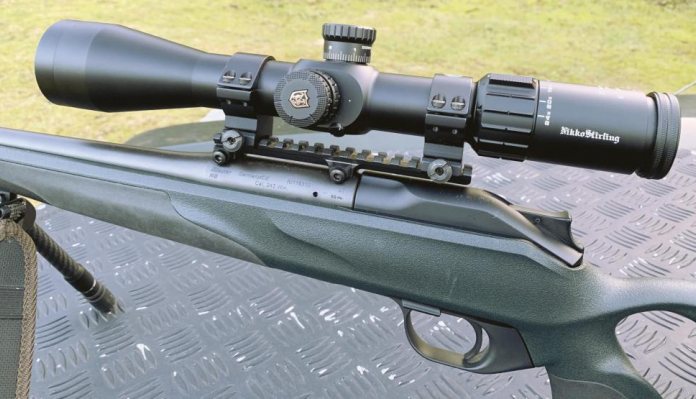 I’ve always found Nikko Stirling (NS) scopes a bit like the curates’ egg; as in, ‘good in parts’. As a company, they have been around for a very long time and gained a varied reputation but have also moved with the times. I’ve tested some that have been less than amazing and others that surprised me by their ability. Seen by many as purely airgun and maybe rimfire optics, today they offer a wider range of models, to suit all calibres and gun types and in that addresses a massive market need.

The buzz words in the last few years has been first focal plane (FFP), seen by many as old school compared to second focal plane (SFP) technology, even though they have been around longer. The former system, when dialled, increases the reticle and image in the same proportion, the result is that no matter what the magnification, the subtensions stay constant. Unlike an SFP system, where they have to be set to a specific power for full value usage. The downside of FFP; if you get the relationship wrong, is the reticle at low power is too small to be useable and at high mag looks like a fence post. This is naturally more a problem with higher magnification range models.

You see less FFP hunting scopes these days, but more high magnification range, tactical/precision type optics and, like other companies, NS has risen to the challenge with their 6-24x50 FFP Diamond model with a 34mm body tube; there’s also a 30mm option of the same spec. The wider tube also seems a pre-requisite for this sort of scope too. Technically, it should offer more adjustment than a 30mm diameter; technically!

A lot of smaller companies have got in on this act and produce a seemingly good spec that often does not live up to expectation or promise. So, what does your £442.95 get you? The blurb says that it comes with a new, MIL-based hash marked reticle, the PRR (Precision Rifle Reticle) which is perfect for long range enthusiasts. My tester came with a skeleton, ½-Mil-Dot type, research showed that both are options.

Click values are 1/10 Millradian or 0.36” at 100m/yards, with 5 Mils per turn (18”) sub-divided into 1/10ths and four full rotations (72”) in elevation and just over that in windage. NS have used the same turret markings for both planes, most scopes of this type will split the windage for faster dialling direction. What I did like, was that the drums are of the lift-to-unlock style, which is a bonus and means it’s now much harder to get lost in elevation and accidently move the setting. They are well marked in white and dial firmly, with good audible and tactile clicks.

On the left of the big, rectangular saddle on the one-piece, 34mm body tube is the combined rheostat and parallax drum.

Illumination is in red only and lights the whole reticle and goes from 0-11. The coin-type battery sits in the top of top of the drum. The parallax goes from 10 – 200m then ∞ and was very stiff in operation. I’m not a fan of extended side wheels, but this Diamond could do with something from the box! Even after a fair bit of use, it did not ease up that much, but was still way too firm easy operation.

The magnification ring is wide and slotted with a raised lug with red insert to aid speed dialling and positioning; it’s clearly marked and firm but smooth in operation, no complaints there. At the rear is a fast focus (European) eyepiece. The reticle is a glass-etched, skeleton HMD (Half Mil Dot) style. With nine dots per arm sub-divided into ½ Mil hash marks there’s a lot of information available. Plus, I have always found the hash a far more precise measuring shape to use. At the base is the old, military-style height/ distance rangefinding grid, doubtless predicated on the height of an average man at ranges from 200 – 1000m in five height increments.

The PRR (Precision Rifle Reticle) is simpler, using a T-shaped pattern without the rangefinding grid. The actual reticle takes the form of a centre crucifix shape with the 6 - 12 O’clock stadia having 15 Mil in ½-Mil notations; all hash marks (5-above and 10 below). The 3 - 9 O’clock stadia is divided into 1 and 1/5-Mil hash marks. Plus, there are four finer 1 Mil sections dived into 1/10s on each arm. Only the inner pattern is let in red. I am working from diagrams here, so don’t know if the PRR has the same illumination issues as the Skeleton Mil-Dot. Without comparing both styles in the field, it’s hard to say what would be more useful. But given the massive interest generated by Precision Rifle competition in general, I reckon it’s this one that’s going to be the more popular!

At 6x, the ret is just about useable, dialling up to 16x you still have the full pattern, but after that you start to lose the periphery. At 24x you lose 2 Mil dots all around and the rangefinder grid. Illumination is also magnification sensitive. Up to 8x, the red at full power tends to blot out the dots and detail. From 10x to 20x, it’s useable, then after that the whole reticle blurs a little at the ends, then at 24x. This is discovered was down to the scope being very head position critical, indicating a smaller than expected eye box, as at high mag I was also getting some vignetting, unless I got it bang on. To be honest, illumination is not what this FFP Diamond is all about and I never found the need to use it on this sort of scope, nor would I.

So far so good?

The Diamond is generally well presented and finished with its semi-matte black skin and looks the business, which will appeal to a lot of shooters looking for this sort of hardware without breaking the bank. Lenses are fully multi-coated, field of view (FOV) @100m/100yds is 1.5-6.1m and 4.5-18.3ft accordingly with an eye relief of 3.5”. NS do not quote a light transmission figure either. Unlike the general marque of these larger tactical scopes, the FFP is not that big or heavy at 14.1” long and tips the scale at 24oz.

I initially tested the Diamond on my Bergara B14 HMR in 6.5 Creedmoor. This rifle is fitted with a GRS Bifrost, fully-adjustable stock, which allowed me to set up my shooting position near perfectly. So, negating the issues I had with head/eye/scope positioning, swapped it onto my Blaser R8 Professional Success with its thumbhole layout did not offer such a stable positioning. Shooting the box @ 100m (1Mil up, 1Mil right, 1mil down and 1 mil left) showed it could complete that test well enough. I did find that in dull/overcast conditions focus was a bit fussy, but in normal light no probs. The reticle comes up well with its crisp, medium pattern. At 6x, it’s just useable but you have to work at it, past this and up to maximum it was fine. I quite like the skeleton, ½-Mil pattern with hash marks and dots, which is most practical in use, although I doubt anyone will use it for rangefinding.

Turrets were great and I do like their lift-to-unlock facility, easy to operate and dial with positive audible and physical feedback on the clicks too. NS missed a trick by not splitting the markings on the windage drum, as it makes laying in a corrections more certain and faster. I thought the 34mm body tube would give more movement, but there’s enough there to take the scope out, or you can use the reticle to hold over. Lens quality is not that of the likes of S&B etc, which became evident as the range increased, certainly in dull conditions.

I tested the scope from 100 to 1000 yards and much after 500 yards the lack of crispness was starting to show, but still useable, At 1000 you could easily ID a deer or similar, but image quality appeared never quite in focus for my old eyes. But for target work it’s fine at most distance it would be used at.

My pet hate is the stiff parallax drum, a useful feature that would benefit from a small side wheel option. Illumination, OK, but as indicated I don’t think it brings a lot to the party. However, on the surface the FFP Diamond is up against scopes costing upwards of £2000, that are built to push the envelope. However, the price is good for what you are getting and, I was impressed by its potential if you keep the ranges sensible, then I think it’s going to have an appeal.