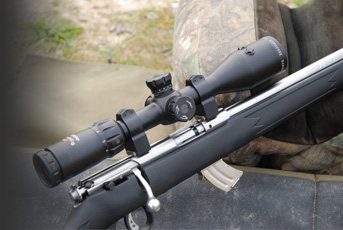 Coincidence probably, but just as Pete Wadeson is finishing off part II of Airgun Hunter - lasers this month, we should get something in that could send all that bolt-on stuff on the road to redundancy. I speak of Nikko Stirling’s (NS) latest idea, the Laser King scope.

My first inkling was a parcel from NS importers Highland Outdoors. The box was for a 4-16x56 Night Eater so I was a little confused as I had already tested that model. Opening it up showed a reasonably normal looking 3-9x42 with target turrets and what appeared to be a drum-type rheostat on the left of the saddle. However, on the objective were two, small, cross-shaped drums, it was then I decided to look at the accompanying letter – doh…

Called the Laser King the scope quite simply has a laser projector built into the inside of the objective bell that shines through the front lens. I was intrigued as I have used laser rangefinder scopes before and also bolt-on units but never seen one integrated.

The covering letter from Highland MD (John Bright) states: “this enclosed scope is a prototype and not the 100% finished product”. But from what I can ascertain it’s very near the full shilling. John also pointed out that there has been unsurprisingly a lot of interest in the Laser King and stocks will be available to the public in mid-October 2009. So we are all getting ahead of the ball, which is never a bad thing.

There will be three models available, and all at what looks to be good money. I have to say, though I have said it before, NS scopes have impressed me in the last year or so and continue to offer in my opinion value for money, good quality optics and some innovative designs and features. Options include the following: 3-9x42, 4-12x42 and 4.5-14x50.

As described the Laser King is a very conventional looking design, and though I’ve no idea if they will be on production versions, I think the target turrets are a mistake on what must be considered a hunting scope. There’s nothing wrong with them, but being un-capped you run the risk of accidentally knocking them and going off zero. Click values are ¼” @ 100-yards, with 60-clicks (15”) per turn and a top to bottom of 6 ½ rotations (90”+).

The magnification ring is horizontally slotted, which makes for a secure grip and at the rear is a fast-focus (European) eyepiece. The laser is controlled by a drum on the left of the saddle with a simple ON/OFF movement of about 1/6-turn. Typically it also holds a coin-type battery, which is rated at 2-hours continuous use; it comes with a spare cell as standard.

Of most interest is the laser, which is a 5-milliwatt unit. The idea doubtless is two fold, as once zeroed you can use it as a rangefinder. All you do is adjust the beam to the centre of the cross hair and it will appear over or under given the distance you are at. As the beam is mounted over the bore, at closer ranges the dot will show higher than zero and at longer ones lower. Once you get the idea and practice you can to a greater degree understand the actual distances, given the dot height.

The only thing I would say is to watch what magnification you use it on as at maximum the dot comes up big and flared, so to a degree negates your ability to judge how far up/down it is. I found it more precise at lower powers.

For me as a rimfire rifle hunter the Laser King can also offer me a fast point and shoot ability. For example if I were to fit it to my 17HMR then I’d zero the scope at my usual range of 100-yards, then set the laser up at around 30-yards. In this way anything that popped up close could be easily dispatched by placing the dot on the target and not even bothering looking through the scope. It would probably be useful for moving targets at short ranges too.

The laser is adjusted by the two small dials on the objective, X-shaped they are easy enough to move with your fingers. The example I had showed a Dual-X reticule, however like the turrets I have no idea if they will stay the same on production models. However, as an idea the Laser King is clever and certainly works, and will definitely add a new dimension to airgun hunting and maybe rimfire and centrefire use too. Add to this Nikko’s ability to build a decent scope at fair money and I reckon they have a winner on their hands. I look forward to seeing a full production version…

We Reckon:
• Clever and practical idea
• Short range point and shoot is useful
• Don’t like the uncapped turrets