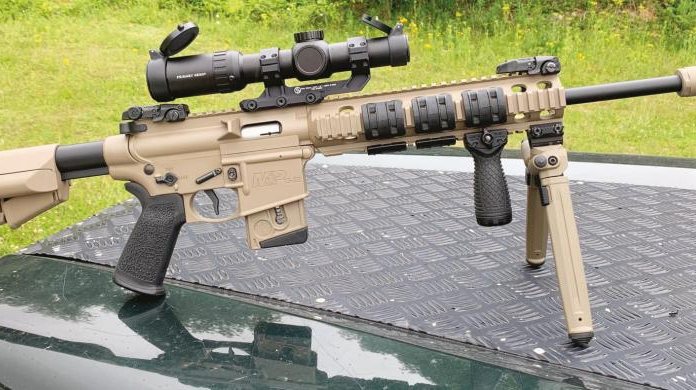 I first saw Primary Arms optics at this year’s British Shooting Show on the Sportsman Gun Centre stand. They offer a range of scopes of a more tactical nature that spans a number of models, along with mounts, prism scopes (fixed, low power magnification, ultra-compacts) and red dots. On test is their SL x 6, 1 – 6x24, available in first and second focal plane (FFP/SFP), I got the latter.

All offer their ACSS ladder reticle (Advanced Combined Sighting System) that is cut for a number of calibres. On test is the dedicated ACSS-22LR (22 Long Rifle). This shows as a large, inverted horseshoe that offers fast target acquisition at closer ranges. It’s also the same size as a standard clay pigeon at 50 yards, so useful for quick ranging, and easy enough to determine what they subtend at different distances. The vertical stadia is marked for 100, 125, 150, 175 and 200 yards, above the 100 bar (in the centre of the horseshoe) is a single aiming dot that can be used as the initial 25 or 50 yard zero point.

There are also wind marker dots to the left and right cut for 5 mph @ 90º with the magnification set at x6, given this is an SFP system. It’s easy enough to reduce or increase the windage values, for example at 10mph just double it and at 2.5 halve it, likewise if it’s quartering. Primary doesn’t give any ballistic information as to ammunition to be used, that you will have to work out for yourself. I decided initially to use my Smith & Wesson M&P 15/22, with its 16” barrel and 40-grain GECO SEMI-AUTO at 1103 fps.

The Smith is accurate up to 100 yards, so I was keen to see what it could do at 200 yards with just a x6 optic. I would not attempt to hunt at that distance, but there seems to be a trend for longer range 22 Long Rifle shooting, plus the reticle is eminently suited for Action-type use too.

Also included is a bracketing-type rangefinder, which consists of a vertical grid with horizontal stadia. These differ in length and are cut in 25 yard increments from 100 to 200 yards. Amusingly, this is illustrated with standard beer bottle and soda can notations. For example, the bottle fills the grid vertically from top to bottom at 100 yards, whereas the can is measured for width. In either case as the range increases they will conform to the approximate stadia width/height. Plus, at 50 yards a standard clay pigeon subtends the horseshoe.

Sportsman provided the SL x 6 with one of Primary’s cantilever mounts, which is a nice design. Build quality looks good, but the turrets feel a bit basic. The one-piece body tube is 30mm in diameter with a large and rounded saddle section, the eyepiece bell has a slotted aluminium magnification ring with low/raised dialling fin. At the back is a fast focus system, both are firm in operation. On the left of the saddle is the drum-type rheostat powered by a CR2032 battery, with provision for a spare in the extended turret cap. It illuminates the whole reticle in red, in 11 increments, with 1-4 being more night settings, with 5+ being daylight visible. The scope comes with flip-up, front and rear lens caps and is finished in semi-matte black.

Turrets are under low covers with a grooved, plastic outer ring for movement, which proved firm and positive. Click values are ½MOA @ 100 yards, with a generous 90-clicks per turn and approximately seven full rotations each. They show a rotary plate on top to set zero, given the comprehensive reticle they are very much a zero and forget option. Given the lack of information on the ammo, you will have to suck it and see as to drop and wind, as I discovered!

Zeroed at 50 yards, I set up a 100 yards target and placed the relevant part of the reticle and fired for group. It printed its usual inch-ish, but drop was around 5” below point of aim, hmm! Moving up to the 125 yard stadia it was just about on point, but that would have an effect as the range stepped out. Out in the field, I set up my BH Targets 4 and 8” steel gongs and was easily hitting the 4” steel at 100 yards, with the new aiming point. I worked out the drop data on my Ballistic AE programme and it showed unsurprisingly, some serious, minus figures as the range increased, with 200 yards needing 48” of correction (46-clicks). Saying that there was enough adjustment to do so. However, in theory, with some trial and error you could utilise the existing stadia for actual bullet drop, but realistically, how far?

But, with a compact and reasonably busy reticle, combined with a maximum magnification of x6, even that 8” gong looked mighty small and shrunk alarmingly as the range reached past 100 yards Plus you are at the mercy of the generic 22 rimfire’s rainbow-like trajectories, ammo quality, consistency and wind. Switching to a CCI, 32-grain HV load got the speed up to 1235 fps (average) and reduced drop a little, but it was still 3-4” low at 100 yards. To be honest much past 150 yards is a bridge too far and the aforementioned rimfire’s negative aspects make performance variable from 100 onwards in the field.

That is not to say I do not like the scope, as I do. It’s a good bet for guns like the Smith, it’s well made and priced, compact and with enough magnification out to 100 yards. Equally the cantilever mount, as it has a long clamping surface and proved well-built and practical. Reticle-wise; the large horseshoe is great for fast target acquisition and useful out to 100 yards and maybe a tad more. I’d set zero out 25 and re-purpose the stadia accordingly, which is a far more realistic proposition! Would I buy one for my 15/22, yes I would, as it compares well to the competition in this area of rimfire optics!